Among the quaint collection of curios gathered by twin brothers, Hubert and Hugh Adams, at their 400-year-old cottage in Coggeshall, Essex, is a piece of Queen Victoria’s wedding cake. This most treasured possession is now almost 134 years old and is preserved in a small wooden box with a lead lining and cover.

The years since it was first cut have dried the cake to a brown sugary lump about the size of a small nut. It was given to them by an aunt who was lady’s maid to the Duchess of Marlborough.

Probably the only other piece of the cake was sold at Christie’s for £70. It was sent for sale anonymously and bought by Lt. Col. Keith Carey, who is attached to the Australian High Commission in London.

But the cake is not the only interesting possession of the seventy-year-old Adams twins. Hundreds of people from all over the world visit them to view their collection of curios at Paycocke’s Cottage, West Street, next door to the National Trust’s famous Paycocke House.

Two of their living rooms are stocked with more than a 1,000 items including china plates, china, brass ornaments, paintings, pictures, old postcards, tortoiseshell needle cases, toby jugs, salt and pepper sets, and souvenirs from the 1914 – 18 War.

Both men served in the Durham Light Infantry and fought in many major battles, including the Somme and Passchendale. They returned unscathed to Coggeshall in 1918. On demobilisation Hugh (who is 3 minutes younger than Hubert) worked as a cabinet maker and Hubert became a gentleman’s gentleman to Gustav Holst, the composer, during his stay at Paycocke’s House.

Built in the 17th century, Paycocke’s House remains one of the best examples in England of a leading clothier’s house at that trade’s most prosperous time. The Paycockes also lived next door, which is now the ‘Fleece Inn’, where the Adams brothers enjoy their daily glass of beer.

Lately the twins have had to give up many of their hobbies, but they are still enthusiastic about horse racing. They boast of attending fifty Cambridgeshires, fifty-one Cesarewitches, forty Derbys and six Grand Nationals.

Recently Hugh and Hubert appeared in the Pasolini film, ‘Canterbury Tales’, part of which was filmed in Coggeshall. Hubert has also appeared as a butler in a BBC radio play.

‘Many people have given us things to add to our collection. We have bought some and made some ourselves’. Hubert decorates gaily coloured china plates, pictures and table lamps. The lace dress covering a historical doll on a musical table lamp was made from an undergarment belonging to the late Duchess of Marlborough. Hugh has built a sideboard, a number of tables and picture frames.

For all the curios displayed in the cottage – hung on the walls, suspended from the low ceiling, or perched on a shelf in the crowded rooms – Hugh and Hubert have a story to tell with each and every one.

Below; The Adams twins Hubert and Hugh outside the cottage next to Paycocks probably with their father Ernest.

In the centre is Hugh Adams, outside the International Stores on Market End. Hugh would later serve in the army and was butler to Gustav Holst – who left him a bequest.

In 1971 a film of the ‘Canterbury Tales’ directed by Paolo Pasolini was partly shot in Coggeshall and some of the locals were used as extras. Shown here outside Paycockes are the Adams Twins, Hugh and Hubert and nearest the camera, Tommy Cheek. 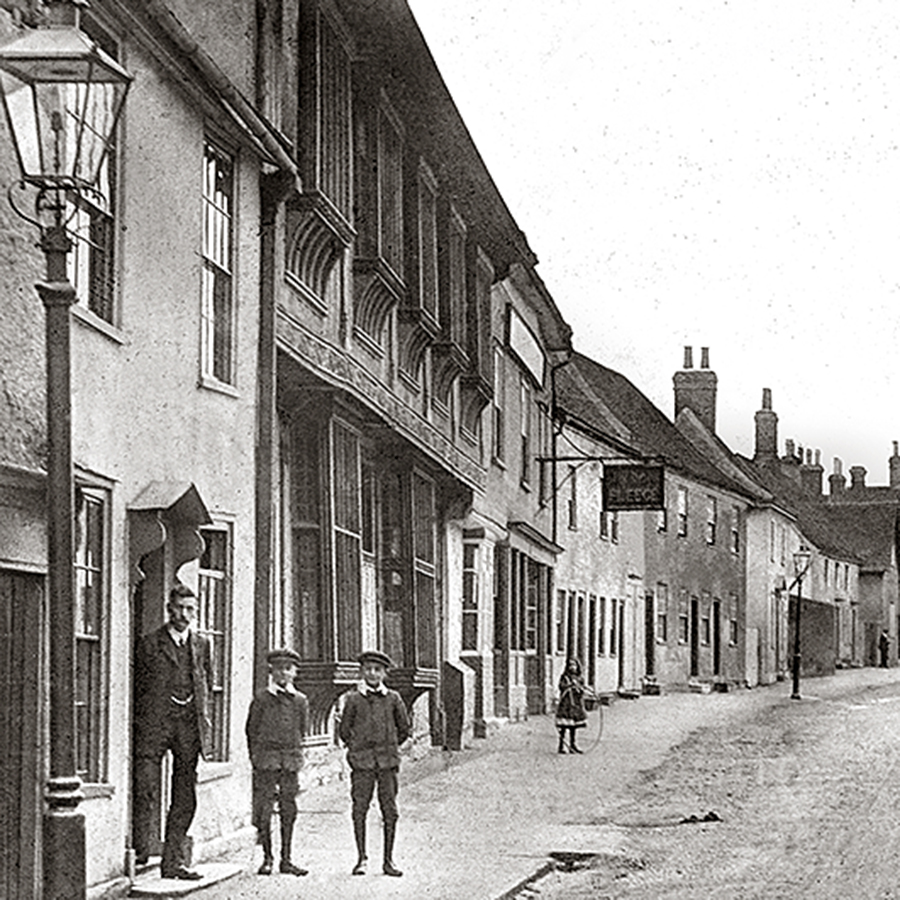 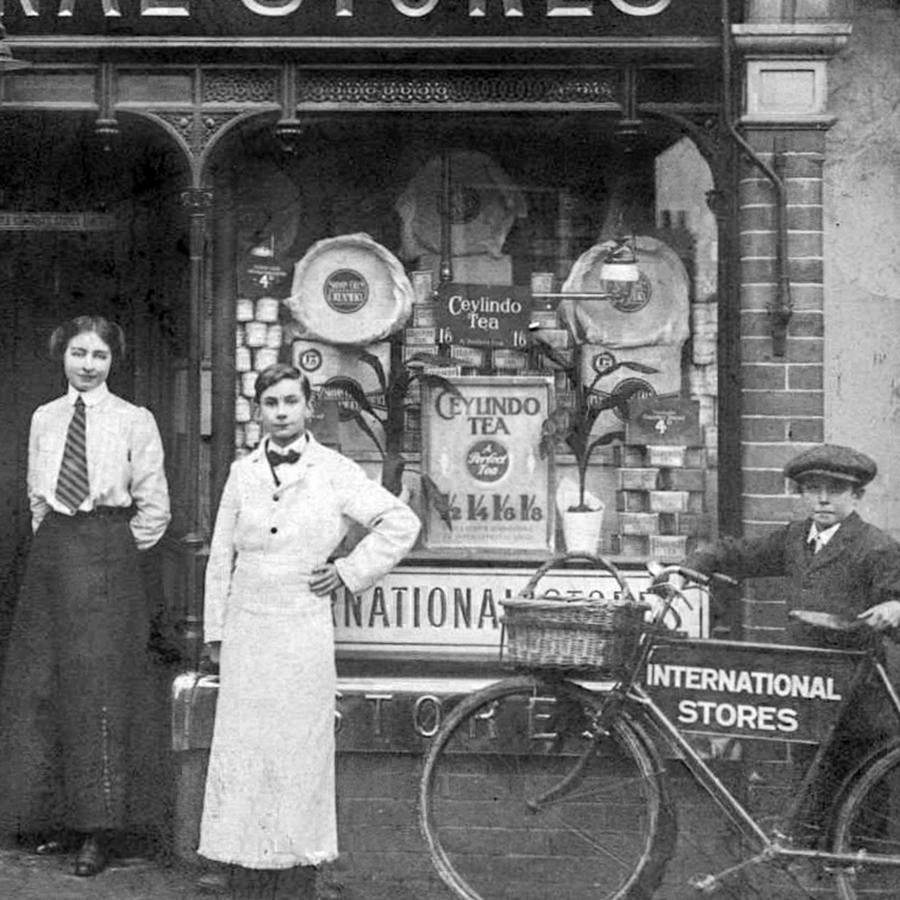 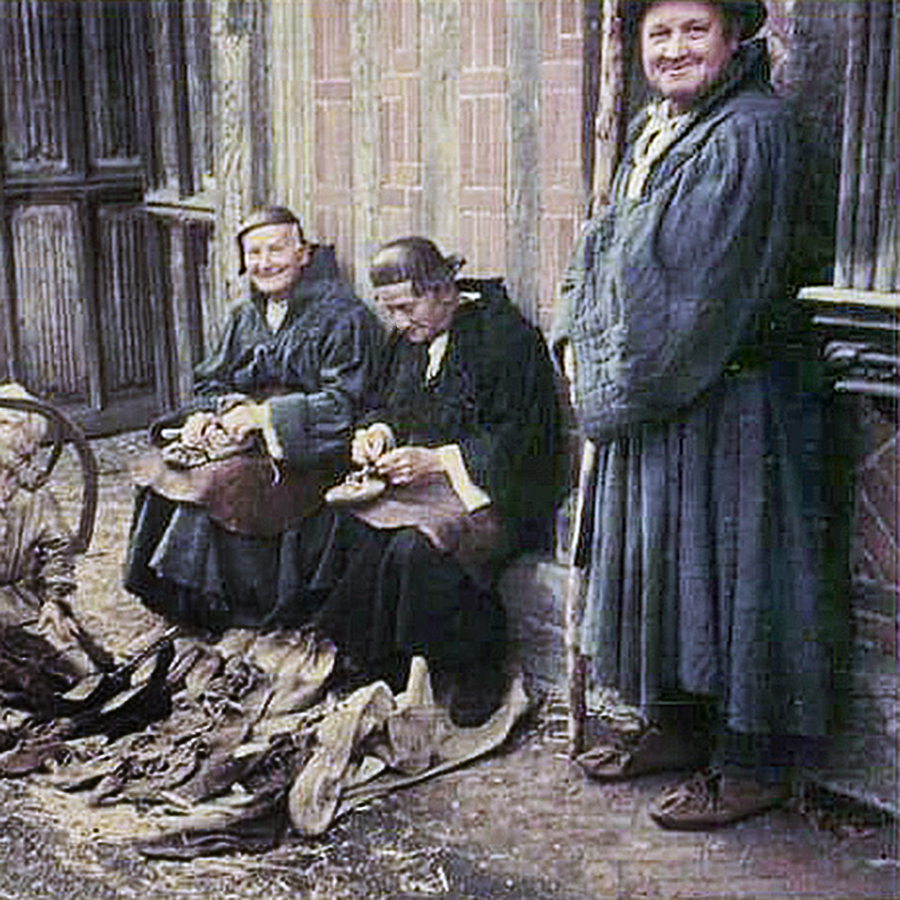