THE CHURCH OF ST BERNARD OF CLAIRVAUX

In 1865 Father Baines, the priest at Witham opened a chapel in Coggeshall dedicated to St Cecilia. Its location is not known but for four years mass was occasionally celebrated there.

In 1866 Richard Rann of Messing Park converted to Catholicism and became a great benefactor of a new mission in Kelvedon.  A school was conducted and priests administered to the local population including that of Coggeshall. In 1897  a community of Franciscan Nuns took charge of a convent orphanage in Kelvedon and the nun’s would visit Coggeshall to care for the poor.

In 1898 the priest in Kelvedon, Father Egglemeers, began to celebrate Mass once a month in the home of Mrs Sheldrake in Coggeshall. This was continued by Father Byles from 1905 – 1907. He was later famous as the priest from the Titanic who helped others to safety and twice refused a place in a lifeboat. His body was never found, or at least never identified.

In 1907 the Sheldrakes built a new house at White Barn, just out of Kelvedon on the Coggeshall Road where a permanent private oratory was established.  Mass was celebrated twice a month and the Coggeshall Catholics worshipped there as it was closer than the Kelvedon church itself.

When Father Richard Gay became parish priest in Kelvedon in 1922 he began to celebrate Mass at Starling Leeze in East Street Coggeshall the home of Captain and Mrs Dixon. It was apparent that the Coggeshall Catholic community needed larger premises and in 1923 Mass was moved to the old Hitcham School in West Street and then to the Assembly Rooms above the Co-op store in Church Street. By then the congregation had grown to thirty and classes for children were held on Saturdays by the Dominican Sisters from Kelvedon. 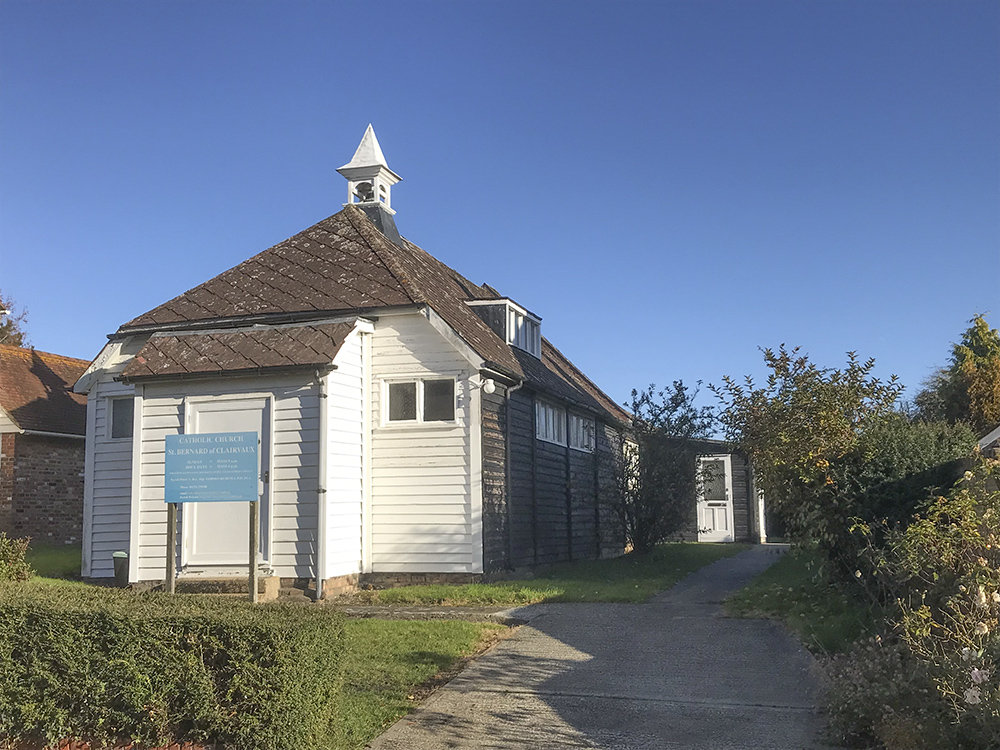 Captain Dixon died in 1927 and in the same year his widow bought a plot of land in Stoneham Street at a cost of £200 ( with other contributors) on which a church was built at a cost of £390, given by Mrs Dixon. This was ‘a temporary brick and wooden structure 34 x 20 feet’ with a capacity of about eighty people. This was opened on 19th February 1928 by Bishop Doubleday.

By the 1930s attendance at Mass had reached seventy. During the second world war the congregation expanded with the presence of Irish construction workers building the new airfield at Marks Hall.

Mrs Dixon remarried – her new husband was the famous artist Cyril Barraud and they lived at the old Royal Oak, next to the church on Stoneham Street. She offered her old house, Starling Leeze, for the use of a Catholic school but it was judged too small for that purpose.

After a decline in the Congregation during the 1950s, the 1960s saw an expansion and the church was rebuilt and extended, doubling its size, in 1962-63 mostly by four parishioners and at a cost of £1900.

Source; An undated booklet by Father Stewart Foster BA (There is a copy in Coggeshall Museum)