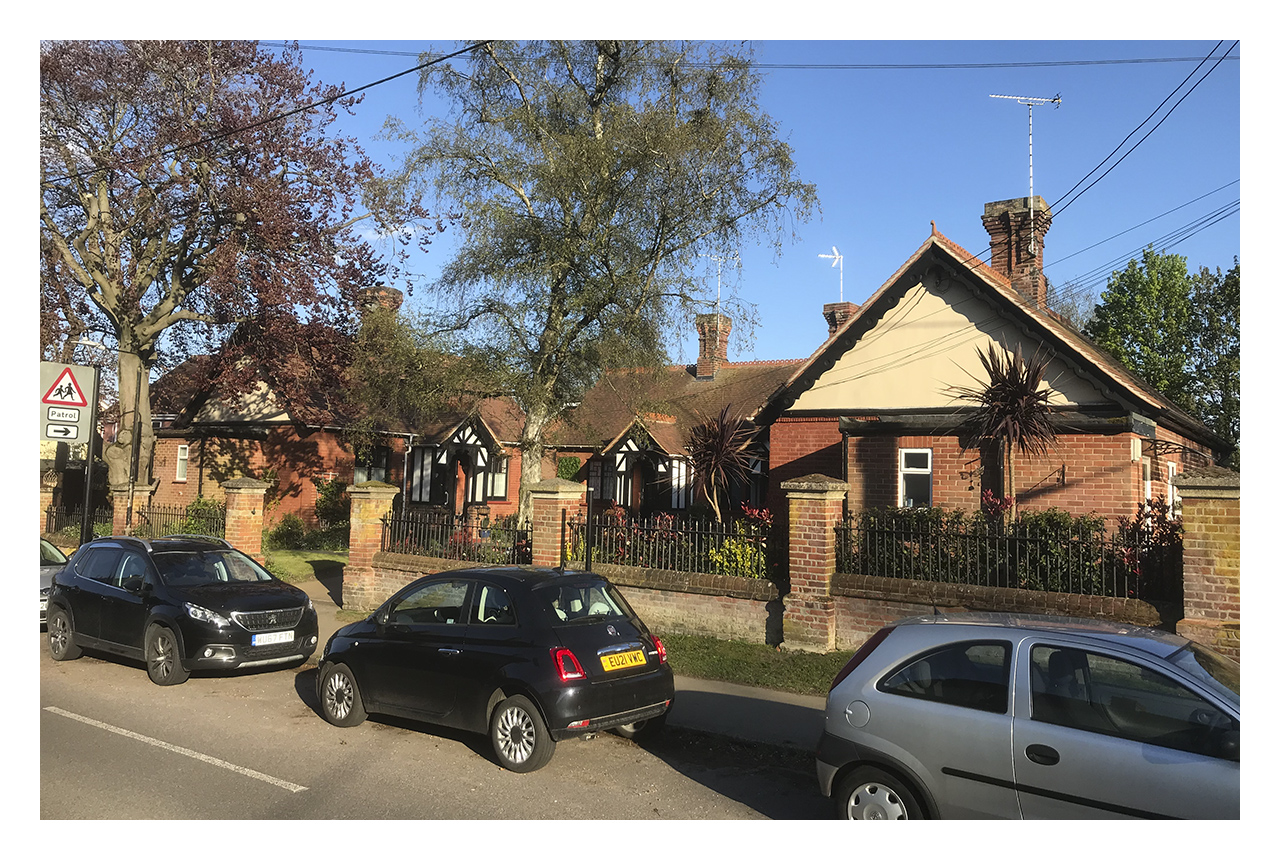 It was 1891 when Mrs Amy Beaumont announced her intention of building almshouses at Church Green.  She and her husband George lived at ‘The Lawn’ on Church Street (now known as ‘Coggeshall House’) and the almshouses were to be built on a piece of land on Myneer Park, which the Beaumonts owned and had gifted to the scheme.

George Beaumont her husband, a kindly man was a solicitor by trade and antiquary by enthusiasm and is still remembered for his book the ‘History of Coggeshall’. Another of the family, Percy Beaumont, was an architect and had drafted plans for the almshouses, seven in all, designed in the ‘Elizabethan’ style and grouped around a quadrangle with a garden at the centre. They were to be constructed of brick, tile and solid English Oak. Five were to be built in the first stage, a block of three facing the road with two on the left hand side and the final two on the right when funds allowed.

The project got off to a resounding start in January 1892 with a gift of £250 from a Mrs Moore ‘late of Coggeshall’. Fund raising continued with a concert, ‘the chief attraction being Mr F B Smythies’ magnificent violin playing’ and in 1893, an ‘Ice Carnival’ was held.

The venue was the Mile Pond (on the Holfield Grange estate)  and the idea came from Ernest W King the Seedsman – they had proper cold winters in those days. It was reported that, ‘The night was splendidly fine and hundreds turned out, notwithstanding the intense cold’. The lake was illuminated with hundreds of Chinese lanterns whilst the skaters were in costume, ‘Britannia’ and ‘Red Riding Hood’, ‘Highland lads and lassies’ and so on. There were inevitably several accidents, cuts, bruises, sprains and a concussion but only one death; Mrs Rebecca Catchpole caught a chill that night and subsequently died of bronchitus. Ernest W King later handed the proceeds, a surprisingly meagre £4, to Mrs Beaumont,  so perhaps the expenses – all those lamps – took a fair slice of the takings as Ernest, in life at least, was notorious for his reluctance to part with his own money except under absolute necessity.

Later in 1893 a successful Bazaar at ‘The lawn’ raised over £200 and by the end of 1894 after more concerts and donations the total stood at £660 and the work of building could finally be put in hand.

By May 1895 the first five houses were complete and five widows were elected to occupy them; the Mesdames; Ardley, Birkin, Carter, Raven and Sansum. Each house contained ‘one large room with a kitchen to the rear and a roomy porch at the entrance’. ‘Each has been furnished with a bedspread, mattress and counterpane and long curtains separate the beds from the other part of the room’. The brass curtain rods were donated by Mrs Philips and the gardens were planted by Mr Birkin, gardener at ‘The Lawns’ using seeds and bulbs donated by J K King. The architect placed a quarter ton of coal in each house as soon as it was completed. The houses were vested in trustees; five from the Church of England and five from the non-conformist churches. 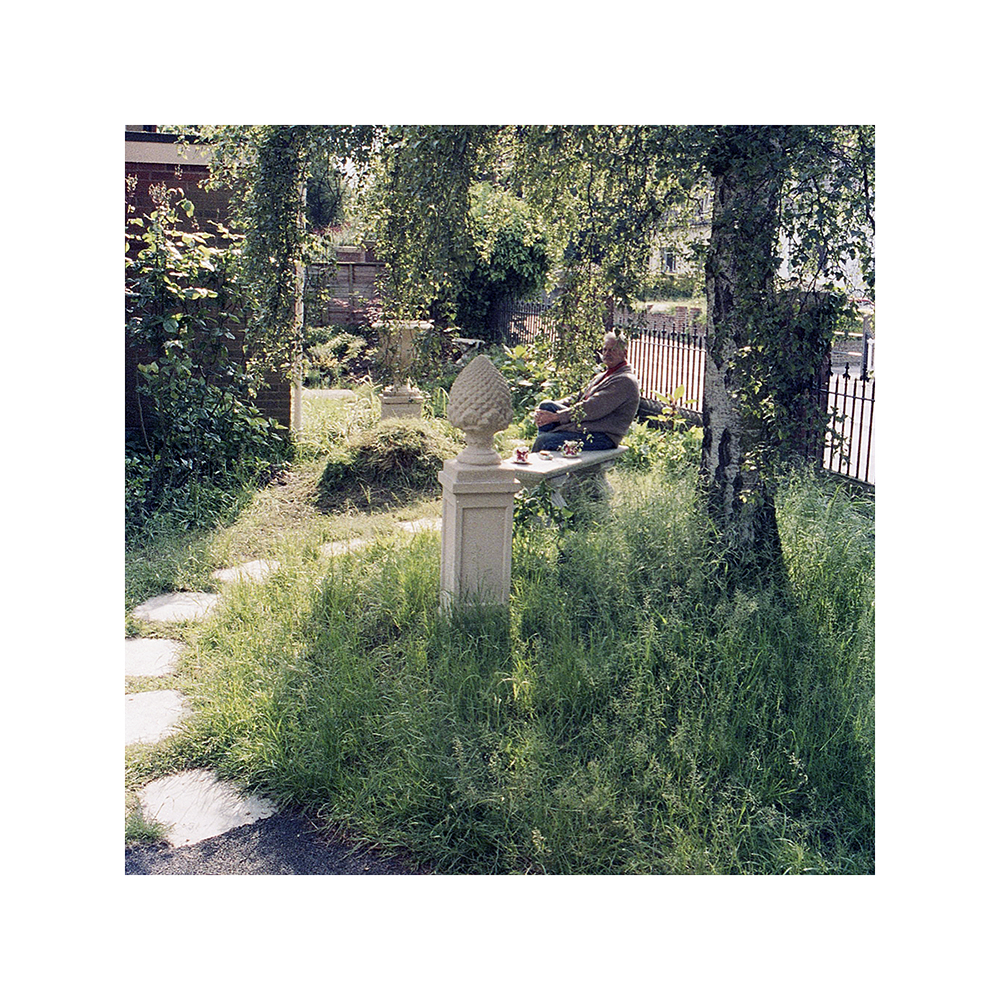 The Church Green Almshouses remain in use and have been extended and modified since that time making each one larger but reducing the total number of houses to four.

Here is the managers recent description;  ‘The almshouses are within 20 minutes walk of shops, chemist, post office and surgery. It is a quiet setting in an attractive village popular with tourists. Each property has one bedroom, a separate living room, kitchen and wet room and an outside sitting area. Two properties are best suited to single occupants and two to couples. The Weekly Maintenance Contribution of £80 – £85 which includes water rates.’

Find out more about the Church Green Almshouses Charity.

Pictured in 1985 is one of the almshouses’ more famous occupants, the author Frank Baines. Frank enjoyed his statuary and cultivating Datura’s, rejoicing in the fact that they were lethally poisonous.
His ‘rolling stew’, which he continually refreshed with new ingredients, in the end proved fatal.