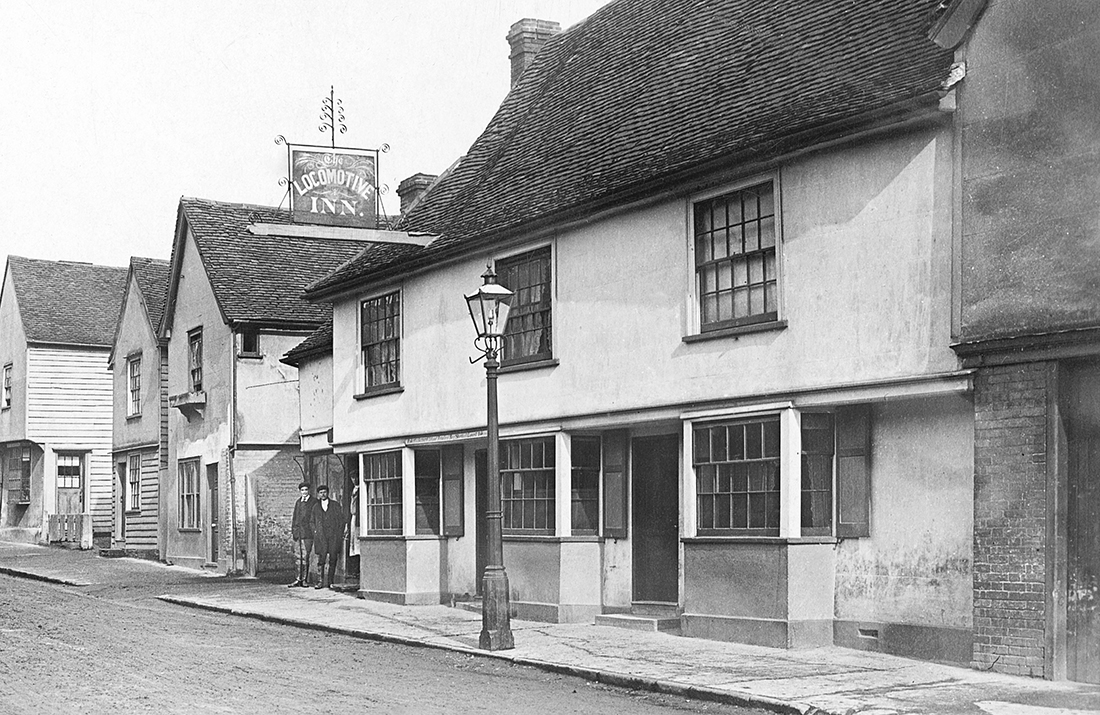 This is the Black Horse after being re-named The Locomotive

The “Coggeshall Gang”, as it was known locally at the time, was a group of up to 14 men who terrorised Coggeshall and the surrounding villages for over 10 years. The Essex Standard newspaper reported in June 1838 “For some time past the neighbourhood of Coggeshall has been infested with a gang of housebreakers, who have carried out their work in a most audacious manner.” The Gang was not finally brought to trial until 1849.

Their leader was a man called Samuel Crow who was employed by innkeepers and the gentry to drive post-chaises. A local public house in Stoneham Street called the Black Horse was the Gang’s headquarters. The landlord of the Black Horse was William French, a gang member. In its early days the Gang pretty much had things all its own way. Coggeshall was policed by one constable: a part-time, unpaid volunteer who was no match for the Gang. After the formation of the Essex Constabulary in 1840 things would change.

Between the years 1844 and 1848 a whole series of violent crimes swept Coggeshall and its surrounding villages. The local police force was finding it difficult to catch the Gang but in 1847 one of the Gang, William Wade, was caught, found guilty and sentenced to be transported. Whilst in prison awaiting transportation Samuel Crow visited him and promised that his family would be looked after in return for Wade’s silence as to the identity of the rest of the Gang. In time it was to become clear that the Gang had failed to honour their side of the bargain and Wade informed the prison governor of their identity.

In March 1848 it was reported that at Bradwell near Coggeshall “four members of the Gang entered a house and terrorised the occupants, James Finch, 62, and Elizabeth Wright, his housekeeper, for three hours. During this time they were both held over an open fire to reveal where money was hidden and Elizabeth Wright was seriously injured when her clothes ignited. James Finch was dragged upstairs, a rope tied around his neck and he was hoisted up to a beam”.
After Wade’s evidence the process of rounding up the Gang began with warrants being issued for all those he named. William Springett and William Tansley were arrested almost at once. Others, William Payne and Thomas Whittaker, managed to escape to Liverpool before being arrested on board a ship bound for America, while William “Crusty” Ellis got as far as Bury St Edmunds.

Samuel Crow was eventually cornered when he was hiding in an attic of a house at the rear of the Black Horse inn. He evaded capture by going over the rooftops into Church Street and escaped to the Abbey Mill. He made his way to London and eventually booked a passage on a steamer going to Hamburg. However, he was recognised by a Metropolitan officer and arrested on board.