THE INDEPENDENT  or CONGREGATIONAL CHAPEL 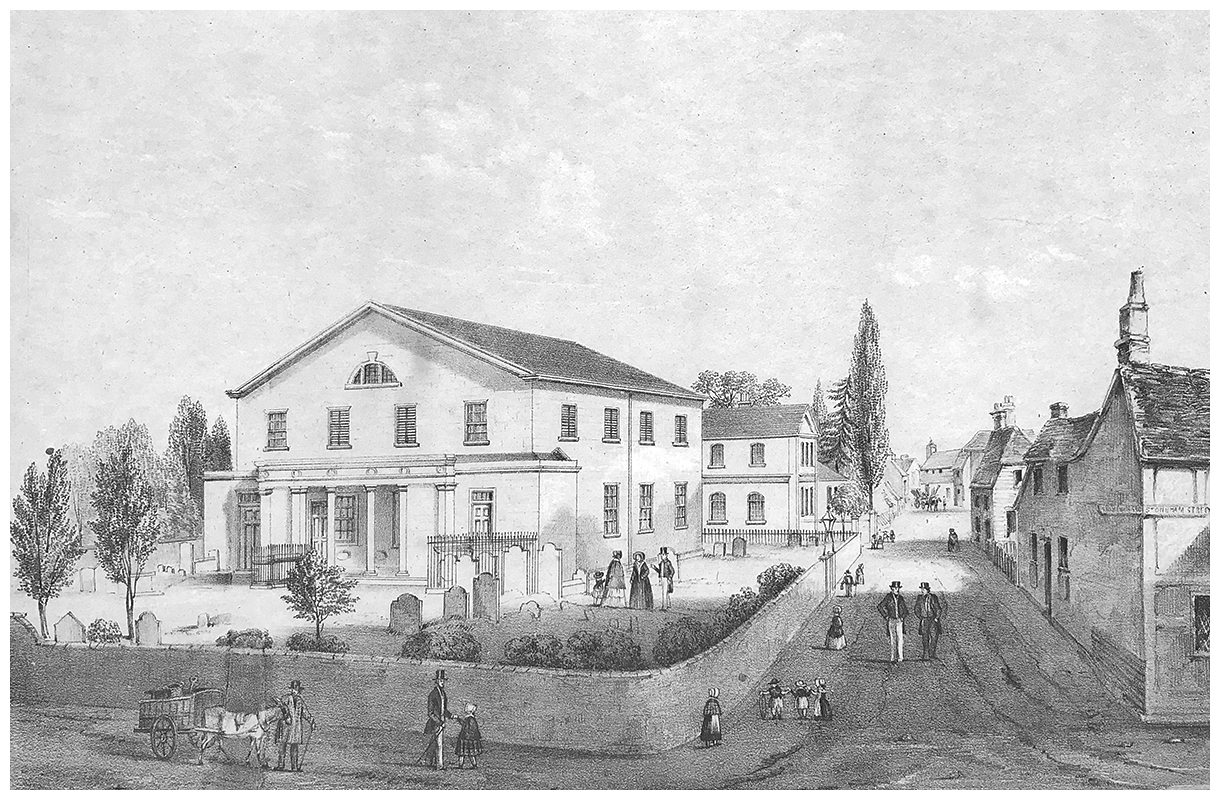 The Independent Chapel and Schools 1860

The Congregational Chapel has its origins in the Independent congregation, founded in 1610 by, among others, John Sammes and Thomas Lowry, former vicars of Coggeshall, who had been ejected from the Church of England and who met in various locations around Coggeshall including a barn in East Street.

In April 1710 various wealthy men, Isaac Buxton among them, raised the money to buy two cottages and the gardens called ‘Old Ales’ in Stoneham Street. The cottages were demolished and a church built which was registered as a place of religious worship on 31st August of the same year.

The church was enlarged and improved over the years and in 1794, a piece of land was purchased between the Meeting House and Church Lane (now Queen Street). In 1834 the church was considerably enlarged at a cost of about £1,000 and in 1865 an apse was thrown around the east end behind the pulpit to accommodate the organ and choir.

Bryan Dale, M A, author of “The Annals of Coggeshall”, was minister here from 1854 until 1863 and as well as the history of Coggeshall his book details Coggeshall’s religious history, especially that of the Independent church. 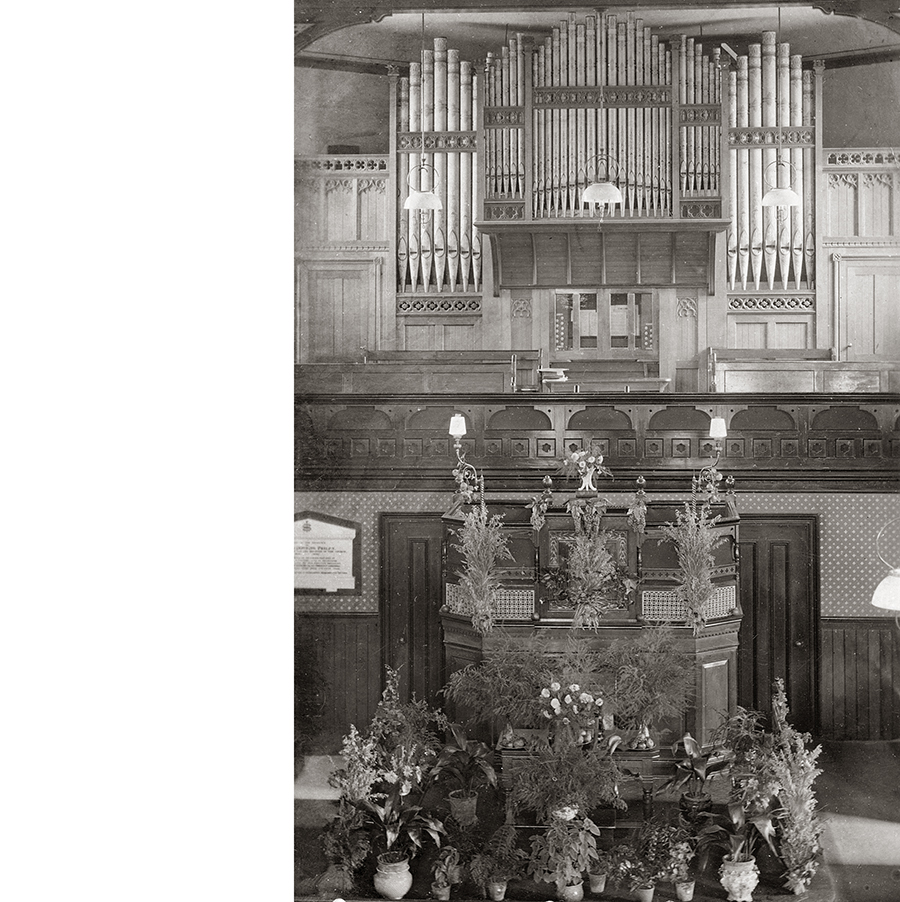 In 1882, the whole of the interior was entirely reconstructed:
‘Re-opening of the Congregational Chapel. This historic building was re-opened on Tuesday 31st October 1882, after having been closed during the previous four months for complete renovation. The present chapel, which was erected in 1710, is a very spacious and convenient one, but had fallen into a dilapidated and unseemly condition. The Rev A, D. Philps, accordingly made an appeal for subscriptions, and this appeal having been very liberally responded to, Mr Chas. Pertwee, architect, of Chelmsford, was authorised to prepare plans, and the tender of Messrs. Gardner & Son, Church Street, for carrying on the work was accepted, the estimated amount being £1,350. The chapel has been new floored and benched with pitch pine seats; new galleries have been constructed in accordance with the extension made in 1864 ; casement windows, glazed with tinted chequered glass, replace the former ones; and the ceiling has been panelled out with moulded ribs, the filling in being a grey ground relieved with small buff stars: the walls are distempered throughout, relieved with stencilling. Perhaps the most noticeable improvement is the new platform or pulpit, which is also in pitch pine, this is a very spacious and ornamental one, and reflects great credit on the designer and maker, Mr W. B. Polley, of Church Street, it was purchased by subscriptions collected by the Pastor’s children. The other improvements are the ornamentation of the ceiling, the panelling and painting, in light blue, of the walls, and the substitution of gas pendants for gas standards.’ (From the Coggeshall Almanac 1884)

The Congregationalists had given financial support to a small school since 1788 and in 1811 this was expanded into the ‘British Schools’ which was to provide education for children of all denominations (unlike the National School on Stoneham Street which was a Church of England school). Originally there had only been a Sunday School which was attended by hundreds of children but this soon expanded to include a day school.  In 1839 a new school building was put up by Mathias Gardner on the piece of land along Queen Street. The school was maintained by donations from individuals and small payments by the pupils but the requirements of the Forster Education Act of 1870 made running the school much more expensive and it looked for a while as if it might close. However funding was found and in 1879 the school was enlarged with a new building added to the east which had three new classrooms on the ground floor and a lecture hall above. Corridors provided a link to the old remodeled building. The lecture hall soon became the regular venue for parish meetings and entertainments. (see plan below from the museum archive) 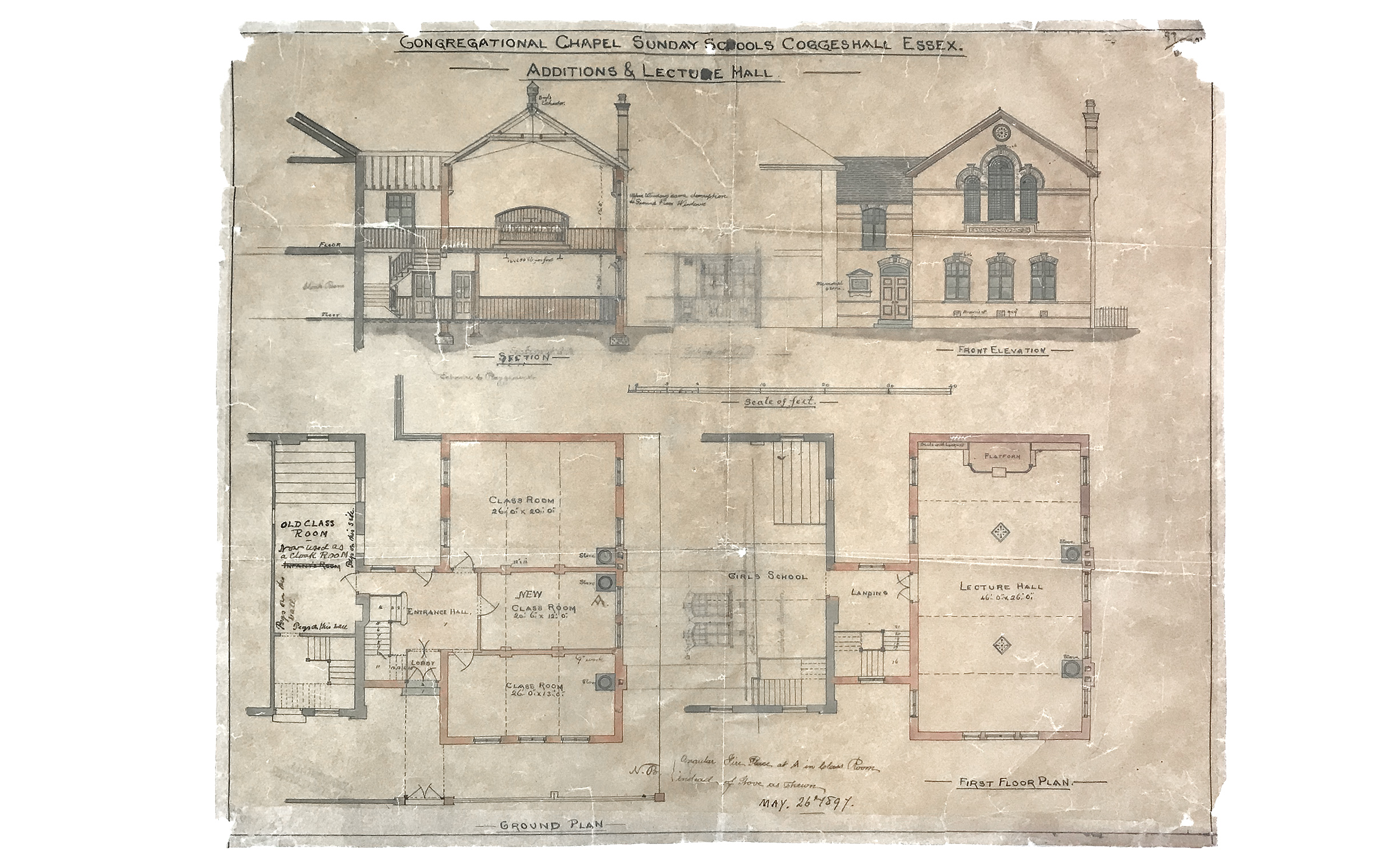 The Congregational School remained in use until 1915 when the pupils moved to the new Council School on what is now Myneer Park. Rooms in the building continued to be  used for meetings and an exhibition, part of the Llamas Fair, called ‘The Face of Childhood’ was held there in the 1960s.

Some of the school log books and the punishment book can be seen in the museum and other documents are held in the archive. 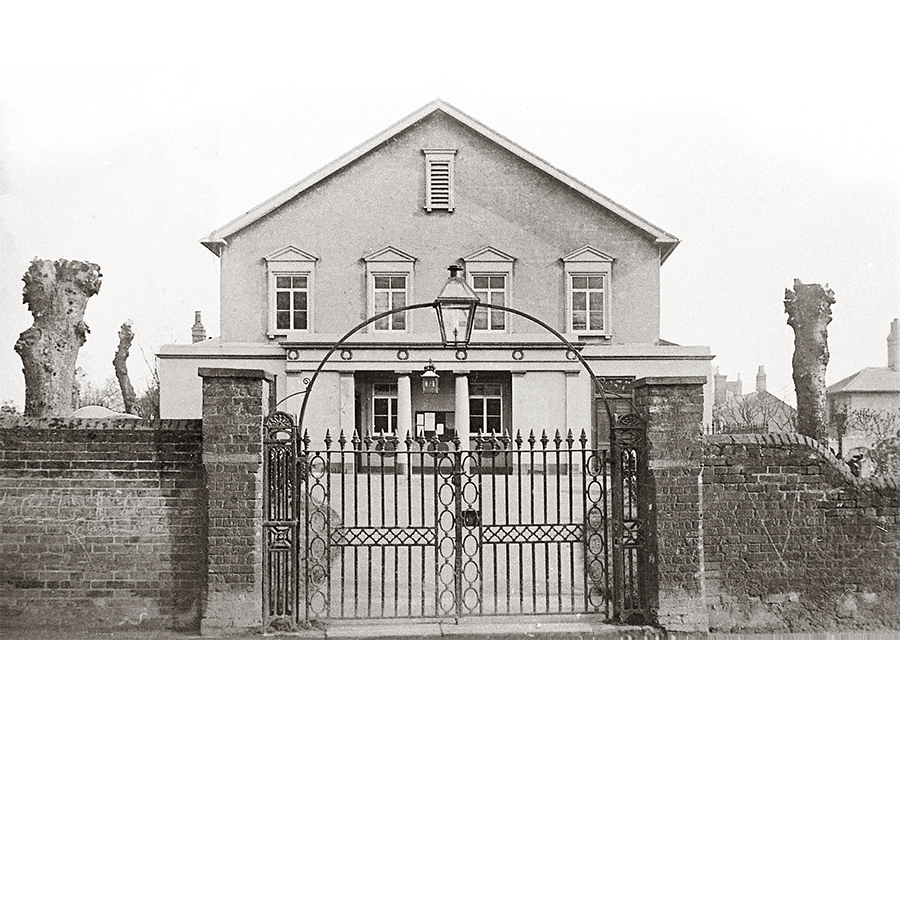 The school buildings have survived and having been converted into apartments, bears the name of Bryan Dale.

The graveyard contains some interesting monuments, although some have now been moved against the boundary wall.  Until recently there were two magnificent old Judas trees (cercis siliquastrum) which looked wonderful in full flower. Unfortunately these needed drastic work but they are now producing new growth.

Part of the church was used for many years by Miss Kemp’s Play Group which I am sure many will remember. The church is regularly use as a venue for meetings and lectures.

In 1989 the Congregational community came together with the Baptists and Wesleyan Methodists to form Christ Church.