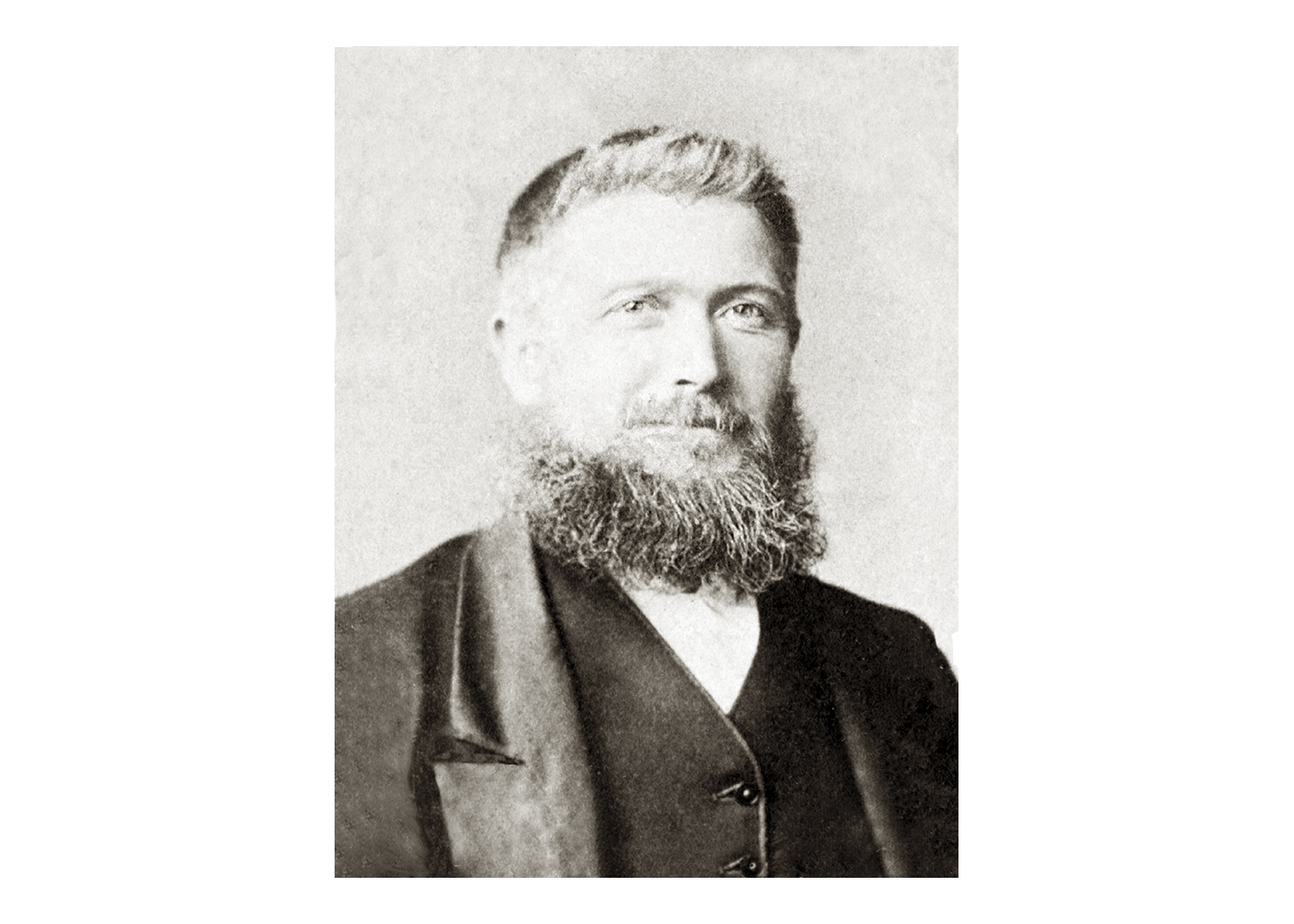 Henry Nunn, (known as Dick), was born in 1836 in Coggeshall’s Rotten Row. His father, Joseph, was a blacksmith by trade and in time Dick became his apprentice. In 1854 his father died from tuberculosis so Dick at the age of 18 became head of the family. They eventually moved into a cottage in Swan Yard just opposite the smithy where Dick remained for the rest of his life. 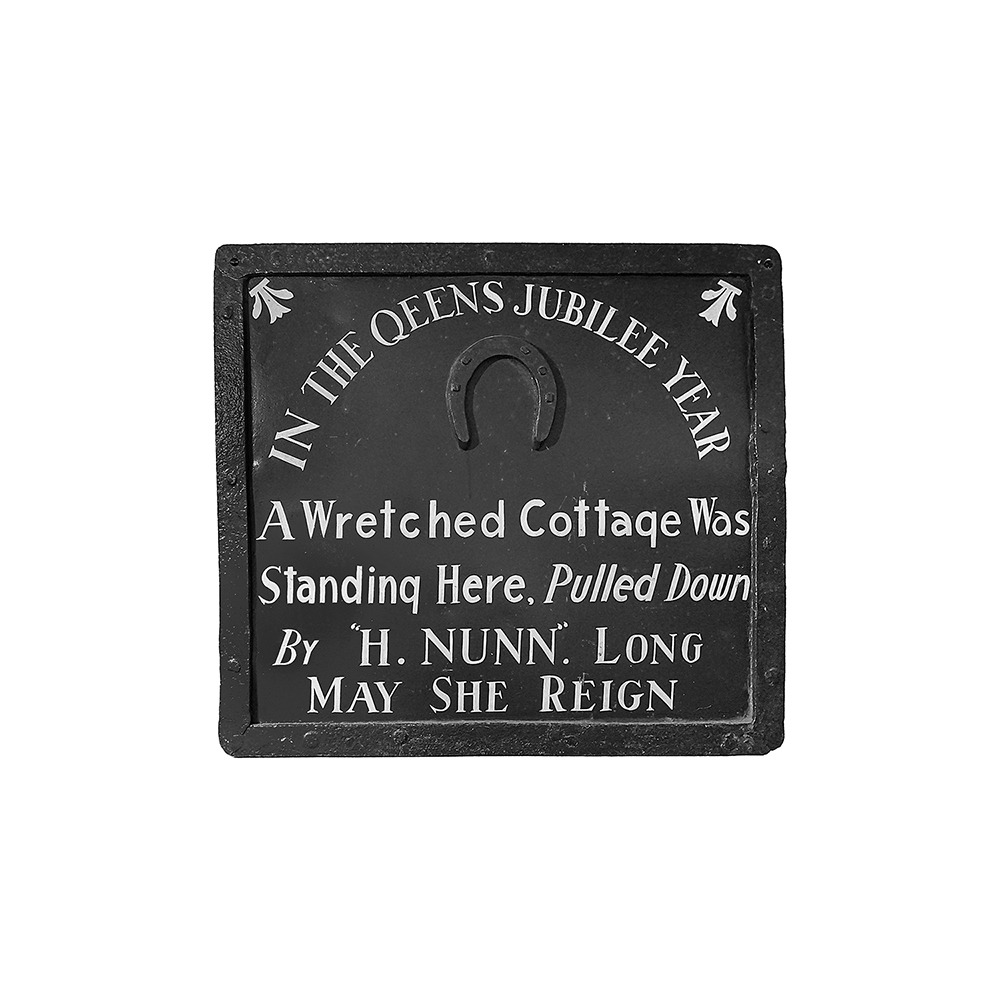 Dick grew up to be a man of very strong opinion and a born campaigner who saw himself as a champion of the working man. In 1887 Dick called a cottage, which stood at the church gate, ‘an eyesore and a disgrace to the beautiful and sacred edifice’. He proceeded to pull it down and continued even after an official warning from a solicitor sent by the Lord of the Manor. He was taken to Witham Court but the case was withdrawn. To commemorate the episode he put an iron sign on the cottage next door which has survived to this day. In all Dick knocked down eight cottages as ‘unfit to remain in existence’.

It was the episode of Grange Hill that landed the campaigner in prison. Dick had several times written to the newspapers about Grange Hill and the cruelty inflicted on animals drawing heavy loads up the incline and it was one of his earnest desires to see the hill levelled. When the authorities took no action, he set about the task himself and with four labourers, began to reduce the level of the road at the brow of the hill. After much arguing with the surveyor and police he was forced to stop, but swore he would be “back in the morning!” The next day Dick was arrested and spent time in Chelmsford prison after refusing to pay bail. Dick was later bound over to be of good behaviour.

Dick Nunn must have been one of the earliest campaigners for public rights of way. He was determined to keep open the local paths and reopen those that had fallen into disuse. It was his efforts to reopen a path that led him to build the footbridge that to this day is named after him. When the bridge collapsed in 1875 the path was closed and remained so for 17 years. 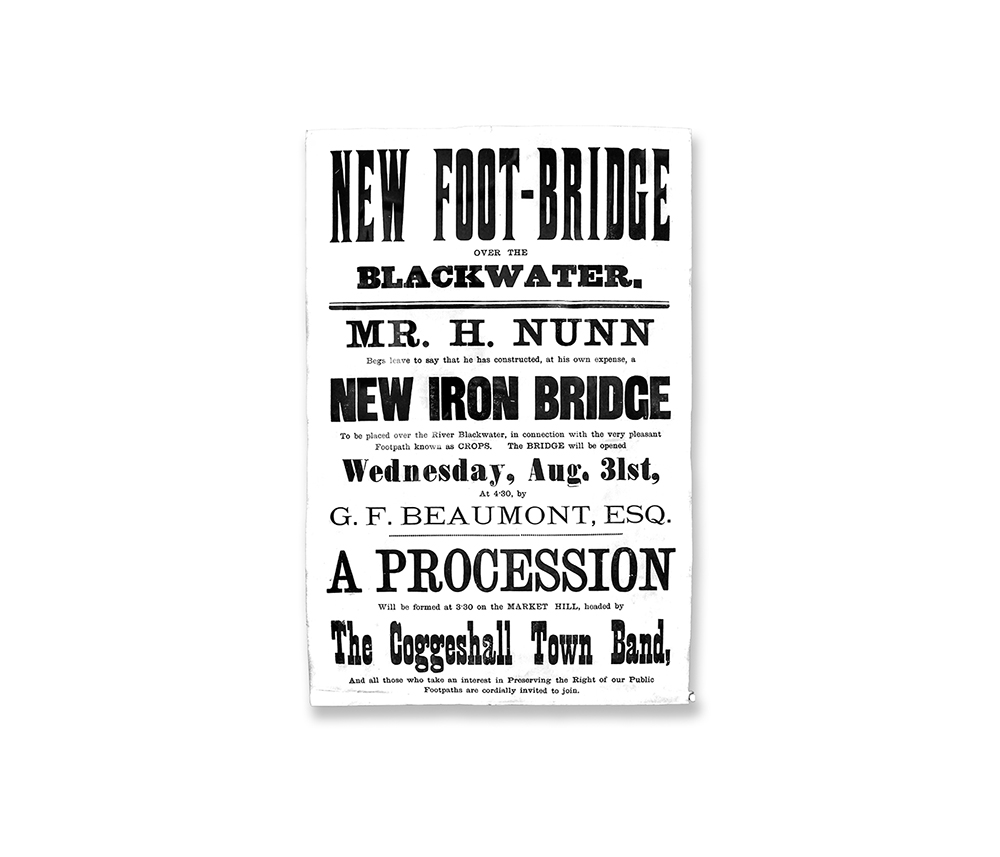 In 1892, Dick took matters into his own hands and set to work in his smithy to built a footbridge himself, using wrought iron which he then painted pink. The completed bridge was mounted on two trolleys and wheeled from his Swan Yard smithy and fixed into position over the river. The grand opening was advertised by a poster which Dick had printed and hundreds of people turned up.  With the town band leading, they all made their way in procession to the bridge. Speeches were made and Mr George Beaumont then declared the bridge open and said from henceforth it would be called ‘Nunn’s Bridge’. 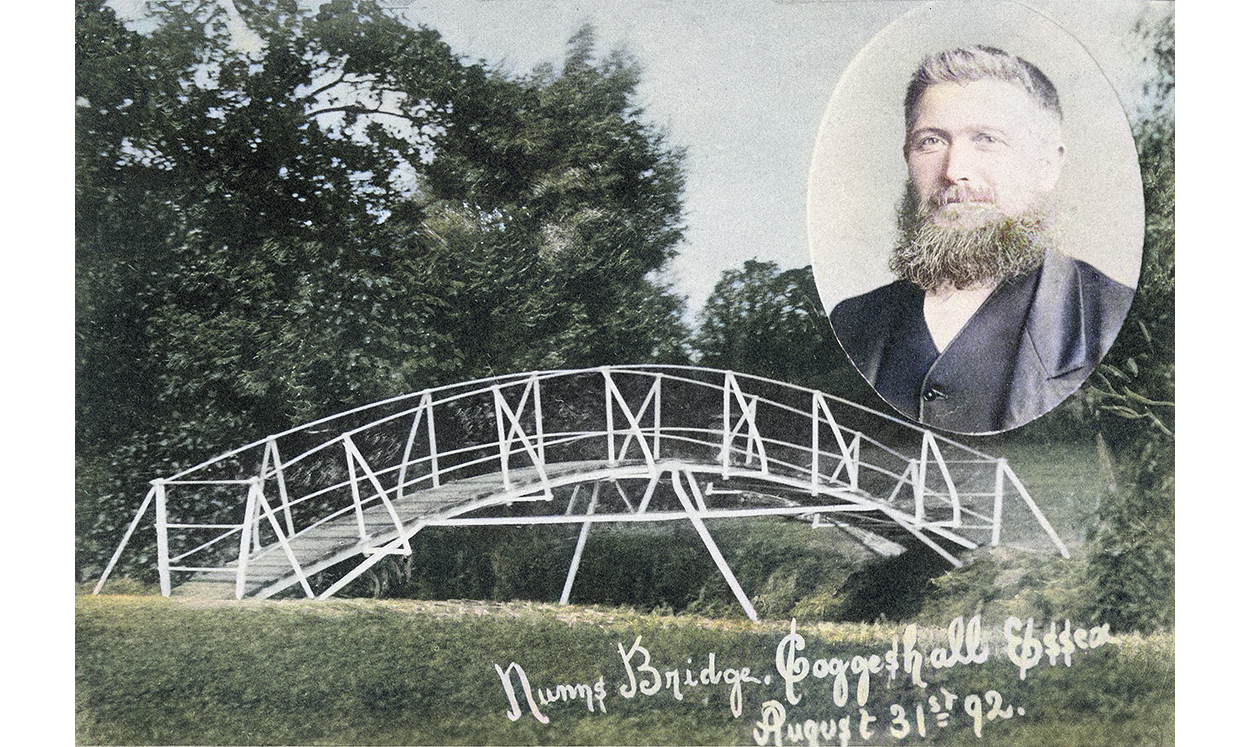 The crowd were invited to cross the bridge and pay a toll to help recompense Dick for the cost. Seven hundred and three people were counted over and a total of £12 15s. 5d. was collected, almost half the cost of the project.

Dick was regarded with great affection and when he died aged 60 in 1896, shops were closed and shuttered and hundreds of townspeople turned out to pay their respects at his funeral, following the town band to the church.

In 1992 the bridge’s centenary was marked with another procession from Market Hill down to the bridge which was decorated with pink crepe paper and pink balloons and speeches were once more heard in praise of our famous blacksmith.

In 2020 after the some of the timber decking fell into disrepair, Essex Highways, (who are now owners of the bridge by virtue of the public footpath which crosses it) made an inspection and concluded that the bridge was no longer fit for purpose and would be replaced. There was huge support from the Coggeshall community for restoration and there were some unsuccessful attempts to persuade Essex Highways to reconsider. This included a survey from one of the countries’ leading historic bridges experts which concluded that the bridge was basically sound. Then an application was made to Historic England to list the bridge and after a tense period of waiting the bridge was listed Grade II.  Essex Highways then dropped plans to replace it and the bridge was subsequently restored and opened for use in October 2021.

An official re-opening ceremony is planned (we are working out the details) for the spring of 2022 which will be the 130th anniversary of the bridge’s construction and opening. We intend to have a plaque put up next to the bridge telling something of Dick Nunn and the how the bridge came to be made. More details to follow.

The museum has a display devoted to Dick Nunn which includes the old iron sign and one of the original posters. 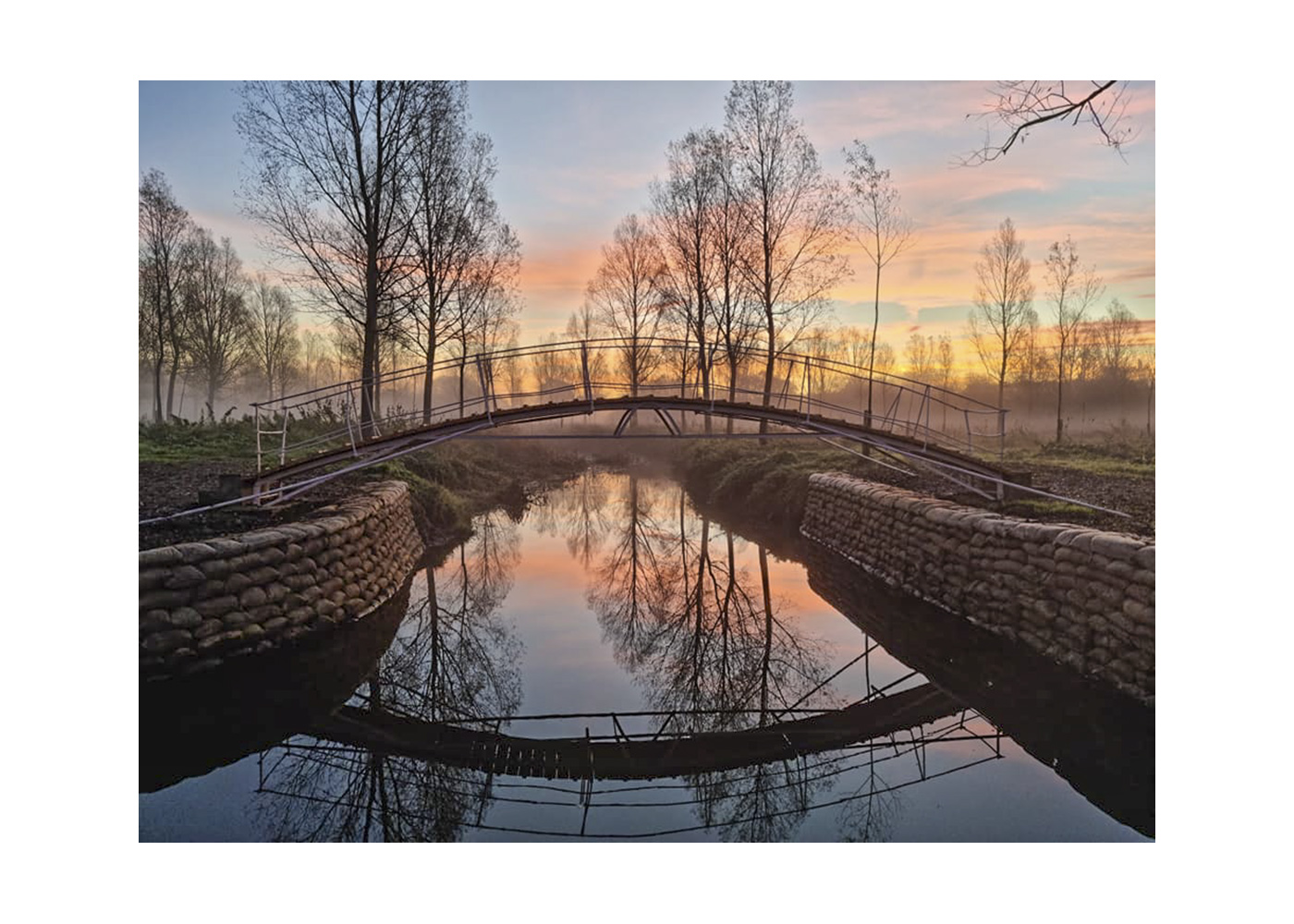