Robert Hitcham was born of lowly origins in Levington, Suffolk. His father and grandfather were itinerant heather cutters and sellers – a material then used to make brooms and brushes. Showing great promise as a child he went on to study law at Pembroke College Cambridge, and eventually became an MP, the King’s Senior Sergeant-at-Law and was knighted in 1604 by King James I, taking up residence at Framlingham Castle. He was possessed of a ‘strong brain and a powerful purse’ as Beaumont put it.  Although not a native witnessed  and was deeply affected by the destitution of Coggeshall, when visiting his friends here, the Guyon family. On Hitcham’s death in 1636 among several charitable bequests was one to build a school at Framlingham to educate ‘thirty or forty of the poorest and neediest’ children of ‘the towns of Framingham, Debenham and Coxall’. Quite how the poor of Coggeshall might benefit from this is unclear and in practice, very few did. In 1666 the trustees decided among other measures, to provide a school house in Coggeshall itself and to allow a schoolmaster £20 yearly ‘to teach twenty or thirty of the poorest children of Coxall to read, write and cast accounts’.

The school assembled for many years at a large room in Stoneham Street which was next to the town clock where a certain Mr Henry Emery was master of the school for 49 years.

The school building and master’s residence on West Street were built in 1858 on a piece of land owned by Coggeshall church. This was bought by the Hitcham Charity for £100 which the vicar at the time then used to buy St Nicholas Chapel and the acre of land on which it stood. The school opened for the first time in 24th June 1859 and was usually described as a Grammar School, although there were plans to open the school to girls it seems that the scheme was never implemented. 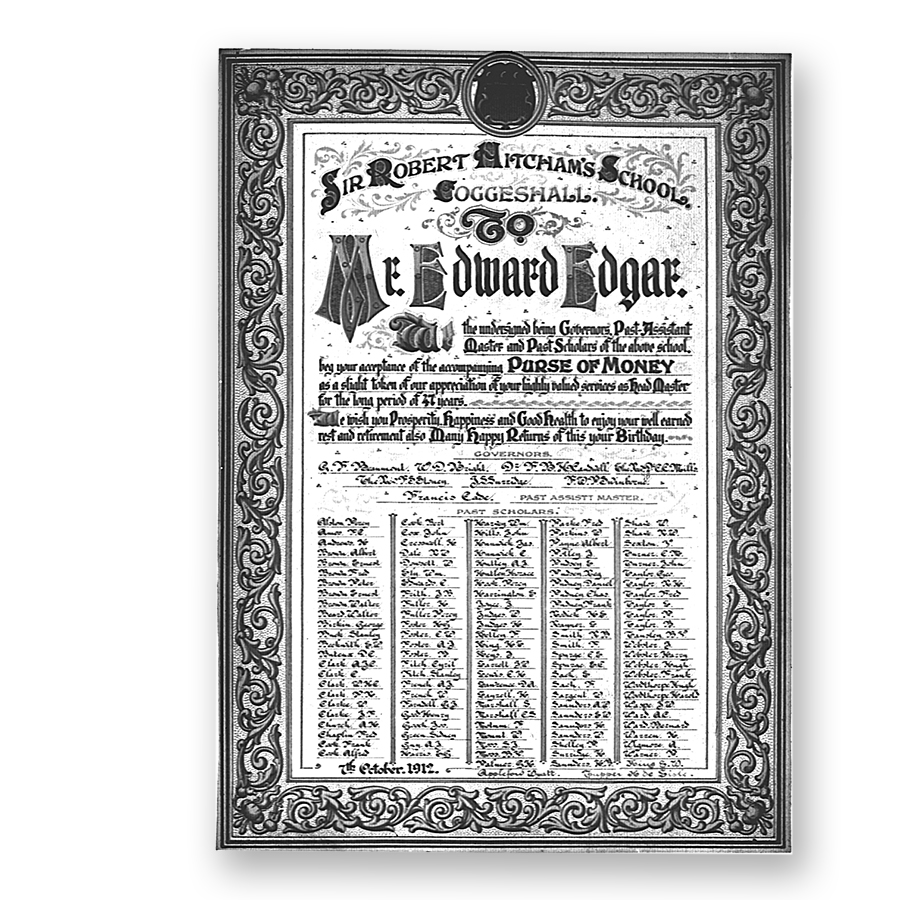 Mr Thomas Hyde was the first master and was succeeded in 1863 by the Rev George Horrocks who resigned in June 1864. After some temporary appointments Mr Edward Edgar was elected master on 9th January 1865 and he continued until he retired aged 74 when the school closed in 1912.  In Beaumont’s time (1880’s) the Tuition Fee was £4 a year but scholarships were also awarded which provided a free education.

Certificate presented to Mr Edward Edgar on his retirement after teaching at the Sir Robert Hitcham School for 47 years on 7th October 1912.

At Edward Edgar’s retirement Mr Joseph Surridge, one the Governors, said that old Hitcham boys were scattered throughout the world, and it must be a pleasure for Mr Edgar to see that his work had been appreciated. Mr. F. Cade, formerly assistant master, said that letters had been received from scholars in Borneo, Australia, Canada, the United States, South Africa, Ceylon, China, and New Zealand. They were also celebrating a double event — this was also Mr Edgar’s birthday. He had spent over 15 years with Mr Edgar, and could speak to his strength character, his uprightness, and his desire to give every boy a sound education upon which they could build their character. Superintendent French, of the Metropolitan Police, said Mr Edgar’s tuition was the foundation of his success. He always taught punctuality, discretion, and never to hurry deciding important issue. Mr W Saunders said Mr Edgar was man of strict integrity, great Christian character, and of strict impartiality, and had endeavoured to instill into the minds of the pupils high and lofty ideals. In making the presentation, Mr Ernest Brown said Mr Edgar was a just man and always stood up for the right and presented Mr Edgar with the beautifully illuminated address and a purse of £74.

By 1912 the number of pupils had declined and closure became inevitable. Great changes had taken place in the education system, and with the County High School at Braintree, (opened 1907) and a county supported grammar school at Earls Colne (opened c1890) Hitcham’s could not compete. The plan was to close the school and establish a charitable foundation to provide scholarships for Coggeshall pupils in secondary education.

This foundation continues it’s work today as the ‘Sir Robert Hitcham’s Exhibition Foundation’ and awards grants ‘to people under 25 living in Coggeshall who have left school and are going on to higher education or training.’

For inquiries or an application for a grant please get in touch with Nic Johnson,  Secretary of the  Sir Robert Hitcham Exhibition Foundation, e-mail;  [email protected] 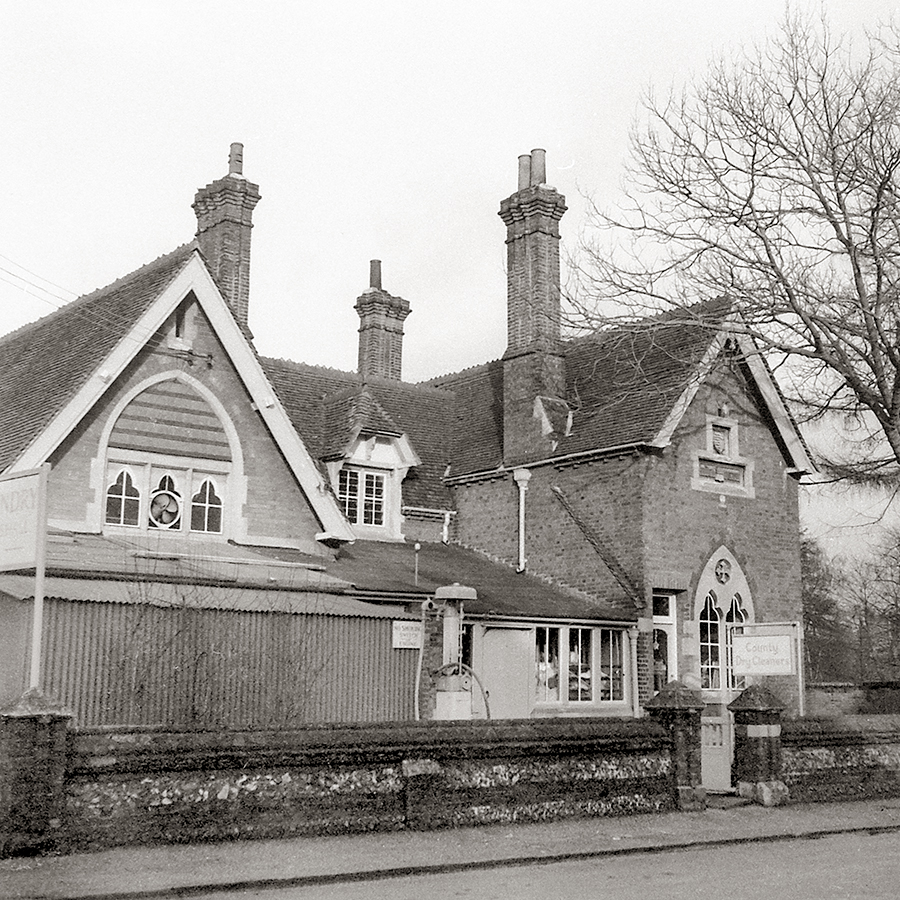 After the school closed, the building was used for many years by the ‘Coggeshall Steam Laundry’ when the smell of washing and wisps of steam would issue from the place. It’s delivery vans were a common site in the 1960s picking up and delivering laundry to it’s customers and this included bed sheets, terry towelling nappies for babies and the lemon-scented towels you were given after going to a Chinese restaurant. As automatic washing machines became more common the laundry became obsolete and eventually closed down in the 1980s.


In around 2000 the old building was sensitively restored and some of the later additions and extensions were removed so that the building regained something of it’s original appearance.  The old school then found a new purpose as small business centre.