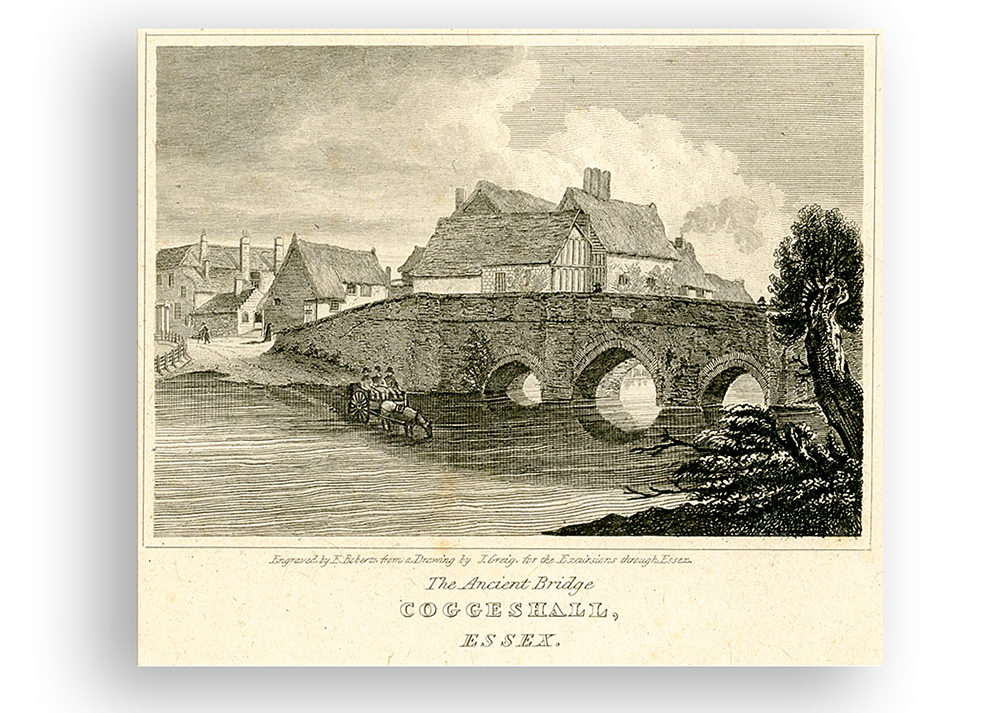 The bridge over the River Blackwater at Coggeshall is known by three names; ‘Stephen’s Bridge’, ‘The Long Bridge’ and by Coggeshall natives as the ‘Horse River Bridge’.

Although much changed over the years, this engraving of 1819 probably shows something of the bridge’s appearance when first built.

Beaumont tells us that there used to be an inscription above the centre arch which showed ‘the arms or badge of King Stephen and a sagittarius, a creature half man and half horse’. 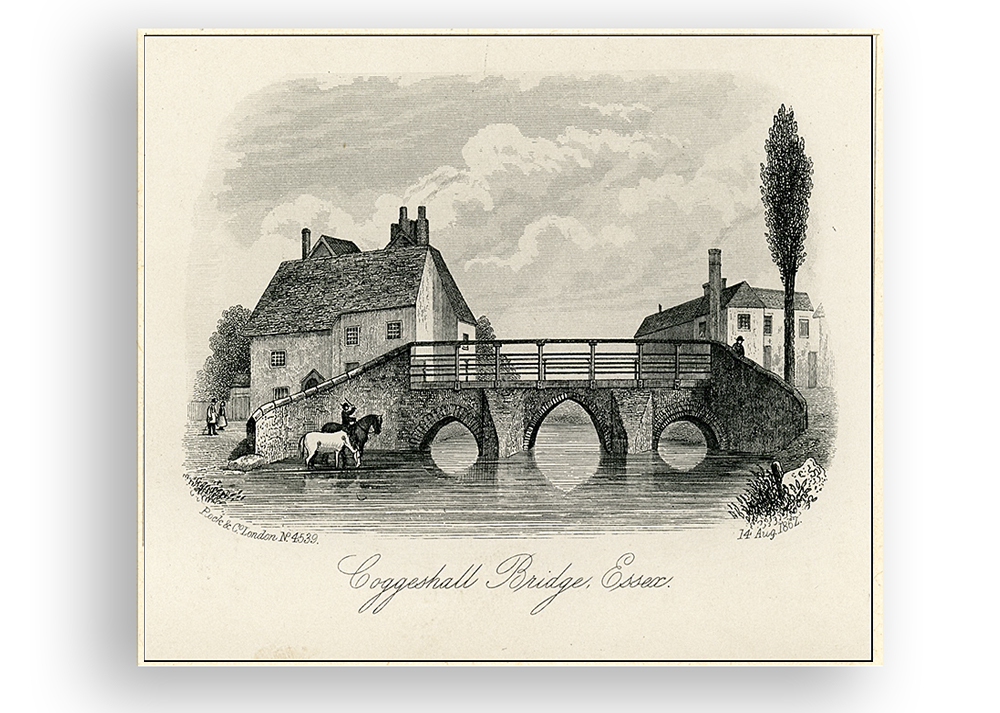 The bridge was built under the direction of the monks of the Abbey at the time when they diverted the river to its present course to improve the flow into their watermill.

There is evidence to suggest that this diversion took place in the 1200s which would give the bridge a thirteenth century date (as favoured by the Royal Commission and John Gardner). The dedication to Stephen would then be a dedication to the founder, rather than a date of construction. This is somewhat unfair to Matilda, his queen as it was her land which endowed the abbey, not Stephen’s. 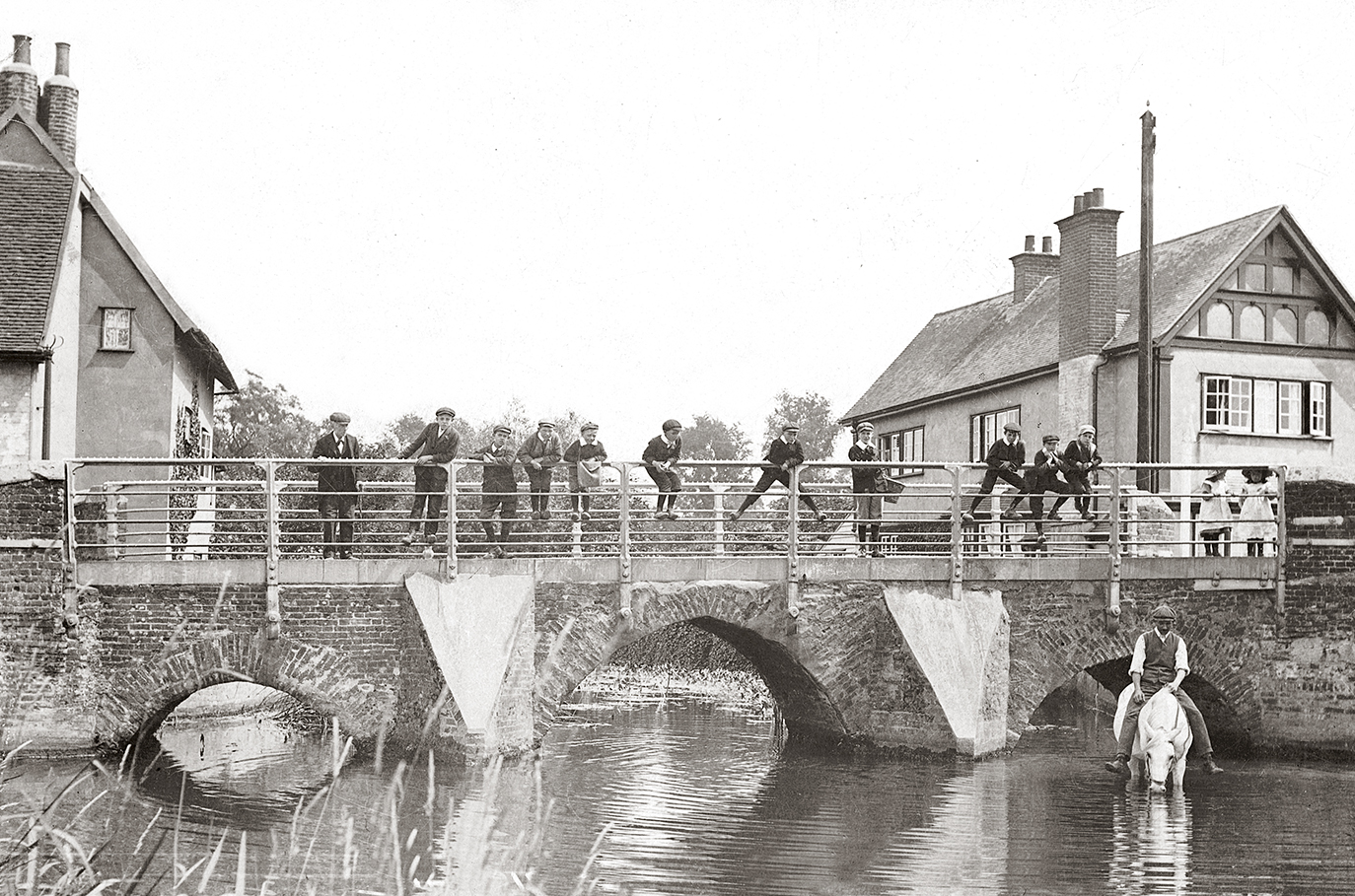 The monks at Coggeshall were pioneers of brick-making and the abbey itself, St Nicholas Chapel and later, Stephen’s Bridge probably use the first bricks made in England since the Romans left. The original course of the river is the unromantically named ‘Back Ditch’ and is crossed by Bridge Street at the ‘Short Bridge’ – named in opposition to the the ‘Long Bridge’ over the new channel. The back ditch once marked both the boundaries between Great and Little Coggeshall and the dioceses of St Albans and Canterbury.

As for the name ‘Horse River Bridge’, this may derive from the sagittarius that used to adorn the brick parapet interpreted as a horse, or more likely it refers to the practice of bringing horses to the ford to drink.

The first recorded restoration of the bridge can be dated by an inscription which Beaumont transcribed;
‘This bridge was repaired in the year 1705, at the cost and charge of Nehemiah Lyde esq Lord of the manors of Great and Little Coggeshall…’. 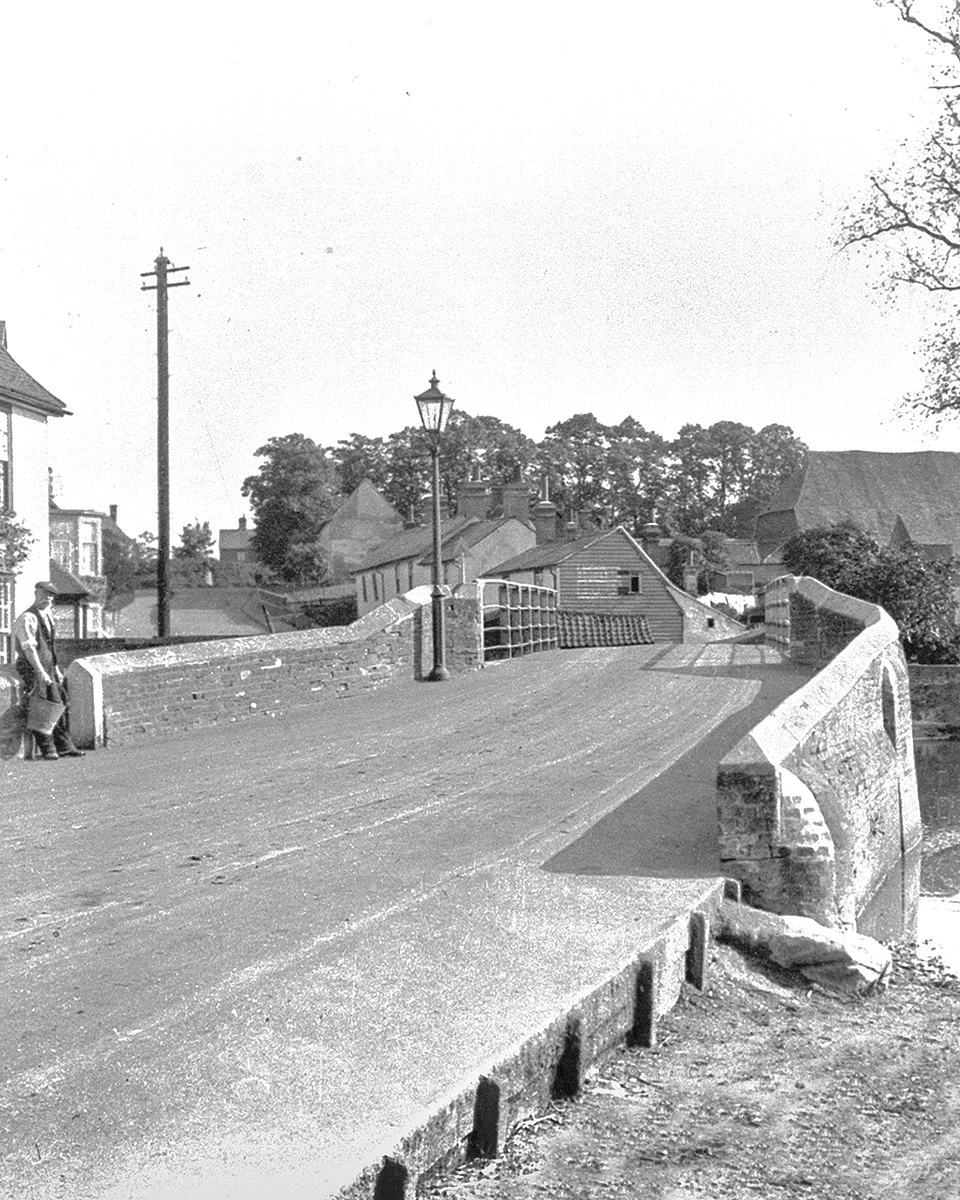 The original bridge was very narrow – only wide enough for a cart. Larger traffic used the ford which ran along the west side of the bridge. In about 1850, in order to widen the roadway, the brick parapet was taken down and cast iron railings fitted as shown in the engraving above. This made only a marginal difference as this quote from 1892 makes clear;
‘the present Horse River bridge is very narrow and the public have often to wait when vehicles are passing over, the width being only sufficient for one at a time. Aged people and children especially are often exposed to great danger and the wonder is that no-one has met with accident here.’ (From the Chelmsford Chronicle 19th August 1892)

By the early 20th century the narrow carriageway over the bridge was, with the arrival of fast moving motor traffic, becoming even more of a danger to both traffic and pedestrians. On the 8th August 1911, the minutes of the parish council record the following ‘Request to county council to widen the bridge at the bottom of Grange Hill which on account of the increased motor traffic had become a source of danger to the public.’

This is probably as close as the bridge ever came to being demolished. Fortunately the County Council engineers came up with a scheme to widen the bridge by fitting steel ‘I’ beams and laying a concrete roadway on top, this created a wider carriageway and gave room for a footpath on the eastern side. The photo shows the bridge just after it was widened, a contemporary note on the back of the photo reads ‘This is the new horse river bridge, as you see, it is made a lot wider.’ And so it has remained to this day. 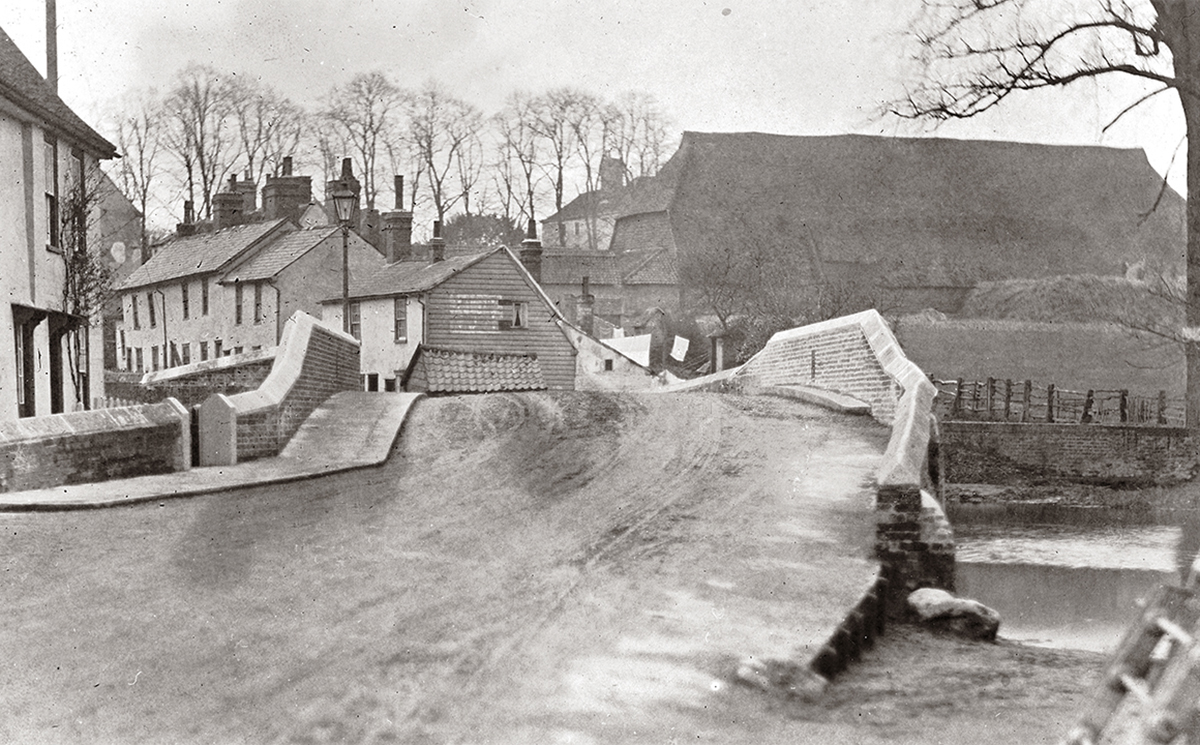 The bridge in 1912 just after it was widened.