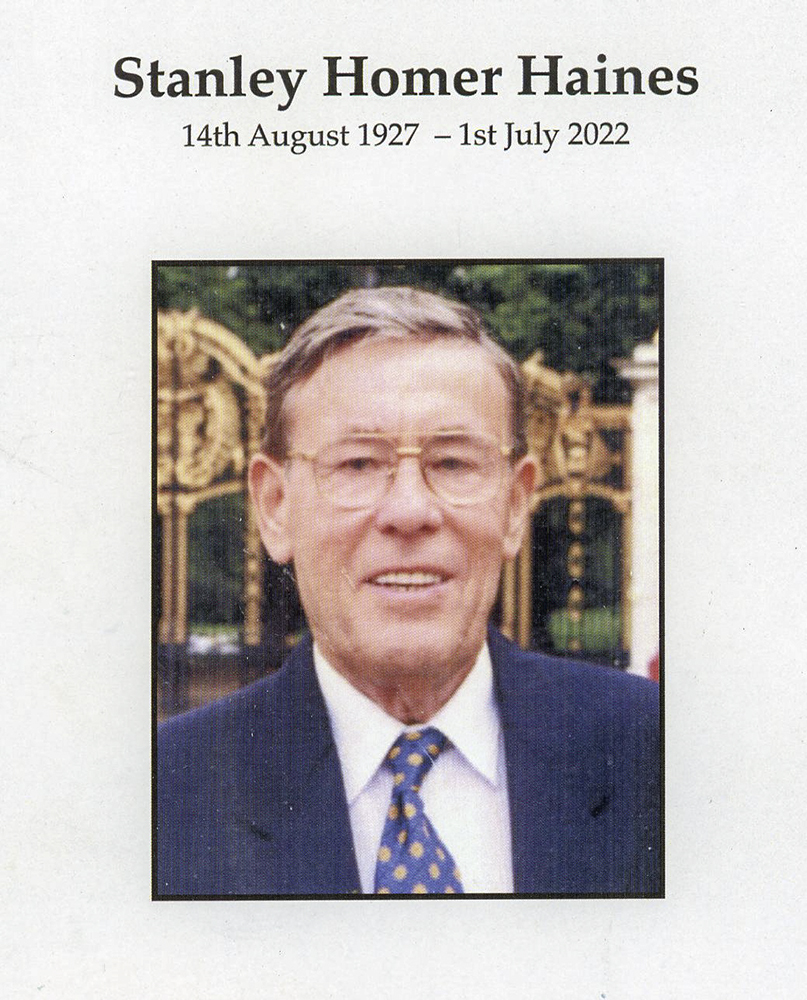 Stan Haines, who died on 1st July this year, was one of the museum’s founder members and worked tirelessly on the museum’s behalf. Stan had a wonderful knowledge of Coggeshall’s recent history and always had a story to tell. He will be greatly missed and his passing leaves us all the poorer. The following account of Stan’s life was written for us by his son Ian.

Stan was born in Tilkey in August 1927. This wasn’t just what we now know as Tilkey Road, this was the real Tilkey, a small close-knit community to the North of the Tilkey Road Barn and in earshot of the last orders bell at Tilkey Lamb. He was the elder son of Ernest and Maud Haines. His younger brother Pat was born five years later. Stan’s father died in 1936 at the young age of 43, after which the Uncles and Aunts played an influential role in his upbringing.

From the age of 5, Stan attended the Church School in Stoneham Street. He passed the scholarship (the predecessor to the 11 plus). He then went to Braintree County High School, studying there through the early years of the Second World War and leaving in 1943 at the age of 16. Teenage Memories Stan had vivid memories of wartime Coggeshall as seen through the eyes of a teenager and recounted many stories, including the bombing of the Church; landmines landing in Tilkey Meadows; life as an army cadet; and the many aircraft crashes in and around Coggeshall. At 16 he wasn’t old enough for conscription but worked for the Air Ministry at Earls Colne and Marks Hall.

Stan joined the RAF at age 18 just as the war was ending. Enlisting in Warrington in 1945 he undertook basic training in Wiltshire and Blackpool before being posted overseas to Sicily, Malta and North Africa. He remembered his service years well and was forever recounting stories of his adventures. Once home he became a great supporter and life-long member of the British Legion. De-mob After his de-mob Stan worked for a short while on the Crab and Winkle Railway. Before starting the next big chapter in his life working for Crittall Windows.

This huge chapter in Stan’s life started with factory work in Witham. He soon moved to the setting out office, then the drawing office, progressing to Drawing Office Manager before moving to production planning. In 1982 his Crittall career took him further afield to Nigeria as General Manager, initially in Port Harcourt and later in Lagos. Returning to the UK some five years his last job with Crittalls was to project manage the move to the new factory at Springwood Drive. Once completed he finally retired.

Retirement gave hm more time to develop the other interests which had continued in parallel to his working life. One of the most notable was the Parish Council. Stan first joined the Parish Council in 1953 and became one of the longest serving Members and Chairmen. An early achievement was to successfully petition for street sweeping in Tilkey Road. He took a great interest in the Church Yard negotiating additional land for expansion and using his drawing office skills to plot the graves and plan the garden of remembrance. He worked to successfully resurrect the Lammas Fair and supported the Coggeshall Carnival. He was involved with the best kept village competition and more recently the talking seat. Finding he had time to spare on retirement he studied accountancy and this led him to volunteer with Citizens’ Advice. Other interests and responsibilities included the Church, the Doctors Surgery, Coggeshall Amalgamated Charities and the Hitcham Trust.

Stan had a great interest in Coggeshall History, collecting information to add to his own memory and experiences and sharing this with others at every opportunity. Conscious that many new inhabitants of Coggeshall had no knowledge of its history he formed a committee which was the pre-curser to the Coggeshall (Heritage) Society. Amongst his favourite subjects were the history of the church, Coggeshall’s architectural heritage, public footpaths and the Marks Hall Estate. He was an active member of the Coggeshall Society and helped found the Coggeshall Museum. He became a walking encyclopedia of Coggeshall and even in his later years took pleasure helping people find out about their Coggeshall roots.

Thanks to a grant from the Essex Heritage Trust the museum now has a sound box where at the touch of a button you can hear Coggeshall voices remembering times past.

We are keen to add more local voices to our archive so if you know anyone who might be willing to talk to us please let us know through the ‘Contact’ tab at the top of the page.


If you would like us to e-mail you the latest news – why not sign up for our newsletter?

Just enter your e-mail address below..