Ralph was the sixth and most eminent, Abbot of Coggeshall’s Cistercian abbey. His incumbency lasted a little over eleven years between 1207 and 1218. An Englishman by birth he was man of considerable learning, somewhat unusual in the Cistercian order, which was principally agricultural. He was at one time Canon of Barnwell near Cambridge. It is his ‘Chronicle of the Holy Land’ and his ‘Chronicle of English Affairs’, especially concerning the latter part of King John’s reign, where he is an important primary source. 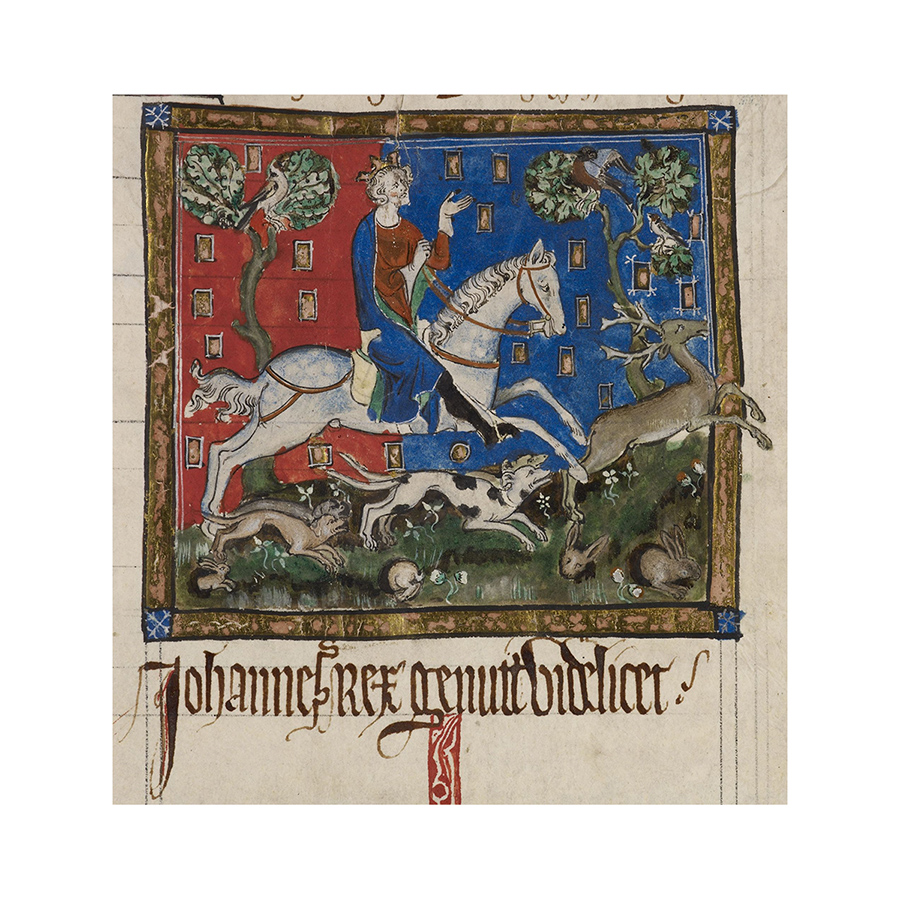 When he came to Coggeshall Ralph was already a celebrated member of the order due to his exploits in the Holy Land.  He had travelled with the Crusaders in 1185 ‘amongst other pious men, who were needed to comfort the weak, instruct the ignorant and animate the brave’ and was present at the fall of Jerusalem to the Saracens under Saladin in 1187.  It was during this siege that he received a head wound which caused him great suffering in later life.


The final entry in his Chronicle of the Holy Land was in 1191, after which he returned to England and retired to monastic life at Coggeshall abbey. Here he set down his Chronicle of English Affairs without which we would know very little of the events during the early and formative years of Coggeshall abbey. In 1218, suffering from increasing bouts of indisposition from his head wound, Ralph resigned as abbot against the wishes of the brethren and was superseded by Coggeshall’s seventh abbot, Benedict. Ralph continued to live in Coggeshall for a further ten years until his death in 1228.

The autograph manuscript of the Chronicon Anglicanum is in the British Library. There is also a printed edition but like the original this is in Latin and I am not aware of an English translation.

The entry for Ralph in the 1911 Encyclopedia Brittanica is here. 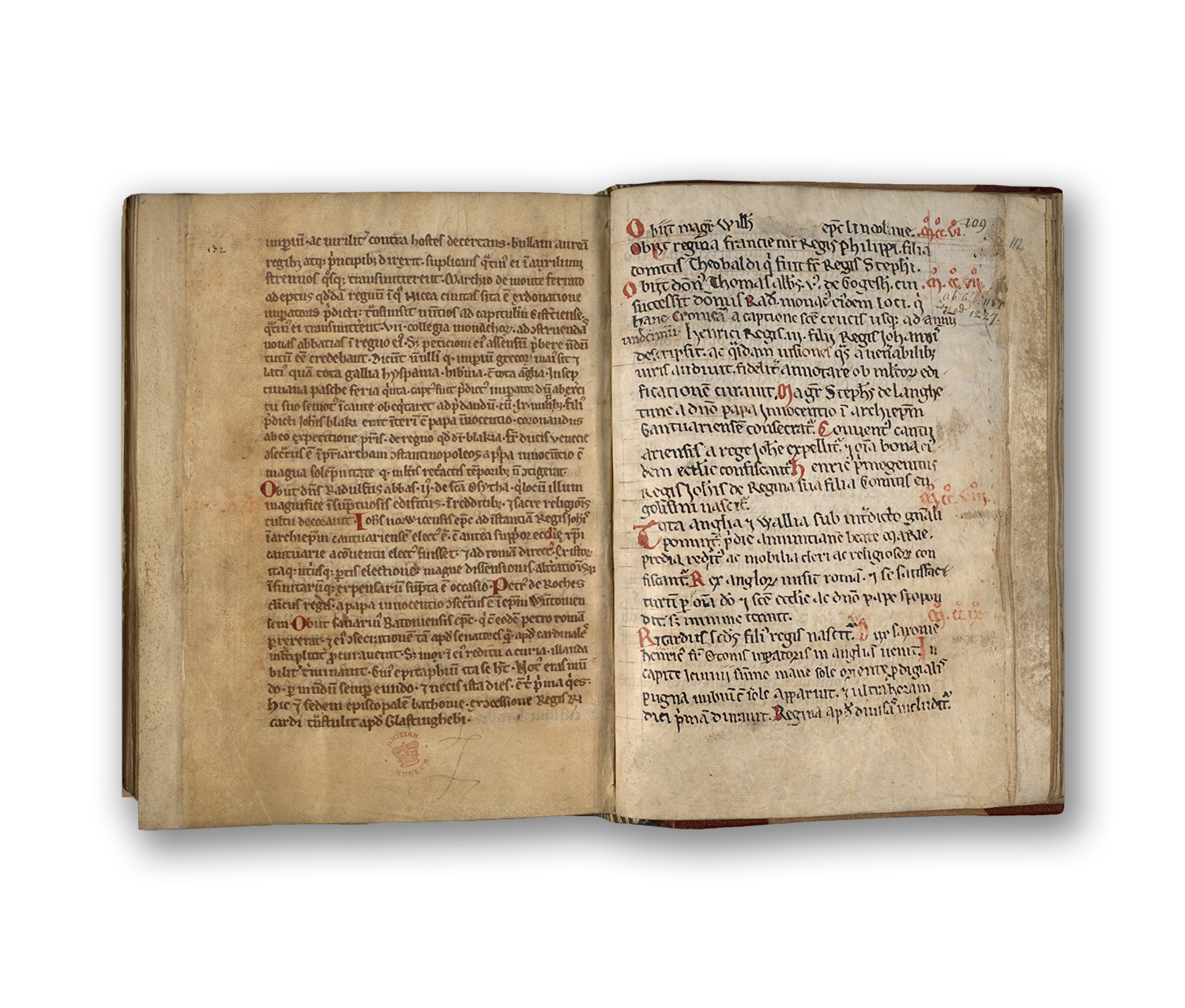 A page from the Chronicon Anglicanum from the British Library.

Report from J S Gardner MA on an excavation at Coggeshall Abbey from the Journal of the British Archeological Association 1955.

‘An interesting discovery during the excavation was a cloister burial at the Chapter House door. The body lay in a brick-lined grave 6 feet 2 inches in internal length. There was a head rest 6 inches high with a 4 inch deep central depression. Although the grave when found was not covered in any way, the skeleton was undisturbed. It was that of a man over 6 feet in height, who had received and recovered from a serious head wound. At his feet were cockleshells usually associated with a pilgrimage to the shrine of St James at Compostella.

A cloister burial at the Chapter House door could be the grave of an abbot and the evidence of the head wound and the cockleshells and the existence nearby of a heap of tiles of a type not found elsewhere and bearing a design which might well be associated with the Crusades makes it not impossible that the grave was that of the abbot Ralph.’

The skull from this skeleton is on display in the museum.

How useful is Ralph of Coggeshall as a primary source for the reign of King John?

Ralph of Coggeshall was born in Cambridgeshire (date unknown) and became a monk at Coggeshall Abbey at some time after it was founded in 1140. He clearly emerged as an important scribe/chronicler at a young age. He is known to have been entrusted with continuing the entries of Ralph Niger to the abbey’s version of the Chronicum Anglicanum* (started in 1066) from 1162 to 1178. Ralph of Coggeshall became the key chronicler covering the years from 1187 to 1224. He also inserted extra material relevant to earlier years when additional information came his way. Furthermore he amended his own entries, covering his years at the abbey, when extra material became available. This concern to be as accurate as he could, gives his Chronicle additional validity. He was abbot there from 1207 to 1218 but retired from that post because of ill health. He died, in the abbey, about ten years after his retirement.
The historian W.L.Warren** starts his biography of King John by discussing the primary source material. He points out that, compared to the reigns of Henry II and Richard, there is a dearth of good primary sources on John’s reign but picks out Gervase of Canterbury and Ralph of Coggeshall as the best of a disappointing line-up. This is what he has to say about Ralph of Coggeshall’s chronicle:
‘His Chronicum Anglicanum is less than its title implies. It is indeed hardly a chronicle at all for there is only a pretence at a continuous narrative. It is more of a note book in which Ralph recorded (often by insertion in what he had already written) interesting information that came to his ears. What he understood by interesting information chiefly concerned the Cistercian Order and the neighbourhood of the abbey. The weather and crops, phenomena in the heavens and strange happenings in East Anglia, have as big a place as King John. On certain great events of the day, however, he questioned knowledgeable visitors to the abbey on what was happening out in the world beyond the abbey gates. Thus his work contains information and opinions that are available nowhere else.’
John’s reign has fascinated historians because of its politrical turbulence, its culmination in Magna Carta and for the intriguing personality of the king who has been regarded as ‘a bad thing’***. The main reasons put forward for the breakdown in relations between John and his barons and which caused the rebellion that led to Runnymede and the sealing of Magna Carta, are as follows: (a) the loss of Normandy to the French king and the failure of John’s campaigns to regain the English territories in France, (2) the quarrel with the papacy which led to John’s excommunication and an Interdict being placed on England, (3) his harsh rule and the fear that that engendered, (4) his untrustworthy character, dramatically confirmed when, after agreeing to the terms of Magna Carta, he tore it up and plunged England into a civil war. It was while that unfolded that he died in October 1216 thus bringing an end to one of the most fractious reigns in English history.

Three issues in John’s reign over which Ralph’s chronicle is particularly valuable:
1. The death of Prince Arthur of Brittany. The young prince Arthur was the son of John’s eldest brother Geoffrey, count of Brittany. By the strict interpretation of the principle of male primogentiture, Arthur had a good claim to the English throne. For this reason he attracted support from disaffected barons and headed up a rebellion against his uncle John in the English held lands in France in 1203. John, in an unusual burst of military energy, led a raiding party across France and surprised and captured Arthur and imprisoned him at Falaise in Normandy. What happened to Arthur is a mystery but a story came to the ears of Ralph at Coggeshall that John was advised to have Arthur blinded and castrated, so as to eliminate him as a rival. Hubert de Burgh, who was in charge of Arthur, had qualms about so barbarous an act and he stopped the two men who had been sent to do it. That turned out to be only a brief a stay of execution and it was widely rumoured that Arthur had been murdered, possibly by John himself while in a drunken rage. When news of this leaked out it caused a massive reaction in Brittany. De Burgh had hoped that Arthur’s death would knock the stuffing out of Breton opposition to John. If that was the case, it was a bad miscalculation. There was widepread outrage and in 1203 the Breton nobility formally denounced John for the murder of their count and withdrew their ‘fealty’ to him. The whole episode of Arthur’s fate did great damage to John’s reputation. Rumours abounded over what had happened, in the end, to Arthur. Whether those rumours were correct or not hardly mattered. His reputation for wild rages and cruelty made them believable and added to the fear his style of monarchy engendered. No other contemporary chronicle provided so much detail over this episode.
2. The reasons for the loss of Normandy. Ralph picked up from his well-informed visitors to St. Mary’s Abbey in Coggeshall an important reason for John’s loss of Normandy in 1204. Ralph has no doubt that the key factor was the loss of support of the feudal lords within Normandy. This was technically treason against John but the plain fact of the matter was that John’s key vassals in Normandy did not like him nor did they think that he (unlike his brother Richard) had the military ability to cope with the French king’s invasion. The only castles that held out against the French were those garrisoned by his mercenary captains. Thus the French king, Philip II, could besiege and take these castles one by one without fear of attack himself. This abandonment of John by his Norman barons robbed him of the support he might have had but it also unnerved him and destroyed his resolution in defending his territories. Ralph says ‘the king could bring no help to the besieged because he went all the time in fear of his subjects’ treason’.
3. John’s style of government. John was an intelligent man and one of the cleverest kings to rule England. He inherited his father’s fascination with government and judicial procedures. He often intervened in Exchequer accounting sessions and presided in person over many legal cases that came up in the royal courts. Writing two decades after John’s death, the chronicler Roger of Wendover described John as idle and lazy. But Ralph of Coggeshall, writing during John’s reign, contradicts that and said that ‘he ruled indefatigably’. This is now the received view, as studies of government records from the time show that England was a well governed country. But of course ‘well governed’ can become ‘too firmly governed’. Ralph does not stray into those sorts of distinctions.

A final comment on John. The problem with John was not his innate abilities and his intellect. His problems were his character defects, in particular his cruelty to those who crossed him, his inconsistent moodiness and his untrustworthiness. These were the things that created the opposition to him and led to Magna Carta, rebellion and to his death.