Methodists may have gathered in Coggeshall from as early as 1780 but we know that in 1811, the Wesleyan Methodists met in Stoneham Street in a building which later became the Forester’s Inn. By 1851 meetings had moved to a small room in East Street in a house abutting the Swan Inn for which they paid an annual rent of 6s (30p). These premises were rather run down and too small for the congregation so a more fitting place of worship was much desired. (see photo)

Some efforts had been made with a view to building a new Chapel and by 1853 a sum of £30 had been collected and was in the hands of a Mr Hunt, who had been appointed Treasurer. However Mr Hunt turned out to be a consummate rogue and decamped with the £30 ‘and is now said to be carrying a basket in the streets of London’. (this probably means that Hunt was a hawker – selling items from a basket)

In 1868 the Chapel room closed but reopened in 1874  through the efforts of Mr Alfred Ward. Recently moved from Ipswich, Ward was preacher and Methodist ‘class leader’ and was determined to bring Methodist classes and meetings to Coggeshall ‘ I can’t live without Methodist Services…I must go where there is something better than fine preaching – Fire and Hallelujahs and a Class Meeting’ He promised to devote a tenth of his earnings ‘to the service of God’ . He opened a grocery shop on Church Street and prospered. 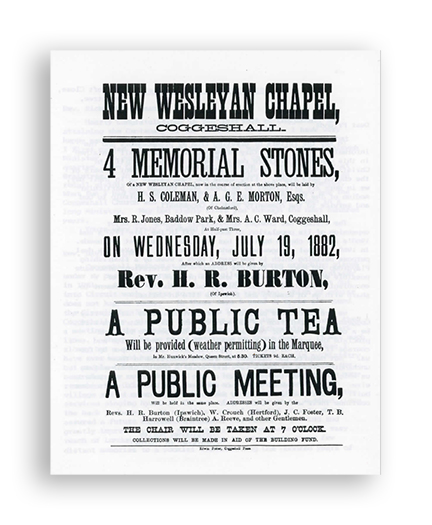 In 1876 Alfred Ward bought five cottages and land in Stoneham Street as the site for a projected new chapel. By 1882, having demolished the cottages and raised enough money, he gave the land to the Coggeshall Methodists and building work on a new chapel got underway.

The building was designed by Mr S W Haughton of East Grinstead and built by Coggeshall builder Mathius Gardner. The architect had designed at least two other Wesleyan Methodist Chapels so he had some history and indeed may have been a Wesleyan himself.  Gardner was offered the building contract in July 1882 after his tender for £785  was accepted – it was the lowest tender. It was said rather unkindly at the time that the Chapel was constructed ‘with a view more to the comfort of worshippers than for decorative art’. (Coggeshall Almanac 1884) 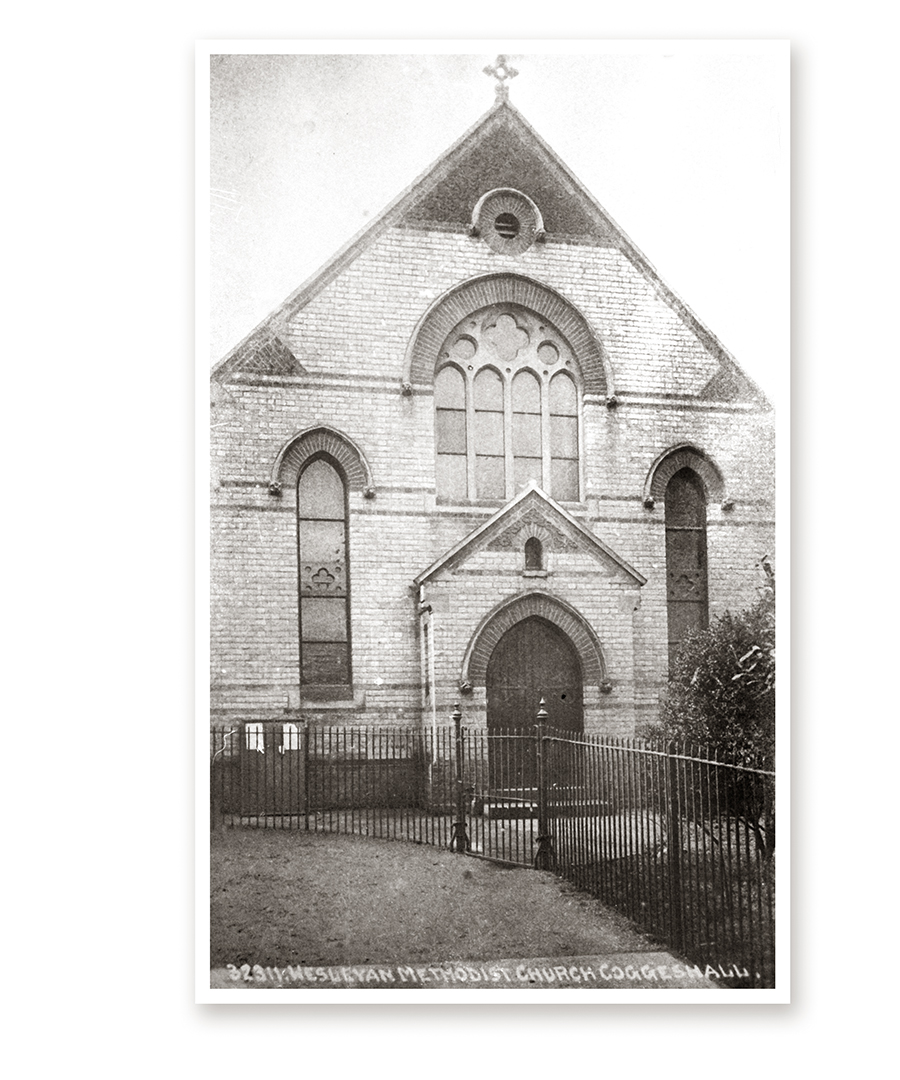 The building was designed in the Gothic style, 50 feet by 27 feet, with a gallery at the entrance end and was able to accommodate 200 people seated on benches of yellow deal (now called pine). The platform and gallery front were of pitch pine and two stoves provided the heating. In July 1882,  the four foundation stones were laid and the chapel was opened at 3pm on Thursday 26th January 1883 with the final cost of the Chapel approaching £1,000 and more than £200 still to be raised. Ward set to work again and by the end of 1893 all debts had been cleared.
There was no minister at Coggeshall so the services continued to be conducted by lay preachers.

In 1885 the old harmonium was sold for £1 18s and a pipe organ was installed at a cost of £23 via the trustees of the Chelmsford High Street Wesleyans.

Alfred Ward had a grocer’s shop in Coggeshall for 21 years but tragically died suddenly aged just 41 leaving a widow, two sons and three daughters. His devotion to the chapel was marked in 1908 with the installation of a stained glass window.

The chapel was restored in 1919 by Edward Sach of Coggeshall for £259 and redecorated in 1954 by a Witham firm.

‘No record of the church would be complete without the mention of Mr W W Moles, who held various roles  between 1906 and 1956 and who was the Sunday School Superintendent for 30 years.’ 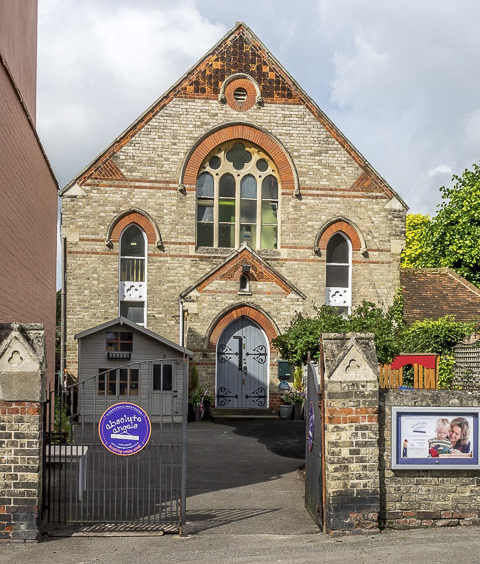 
In 1961 the old schoolroom and vestry were demolished. In the 1970s membership increased as new housing estates were built in the town. In the early 1980s it was reported that although membership was down the church was in use nearly every day of the week. The centenary of the chapel was celebrated in April 1983 and a leaflet issued outlining Coggeshall’s Methodist history but despite this in 1989 the chapel went out of use.  The chapel’s closure as a place of worship came about when Coggeshall’s non-conformist communities came together as Christ Church and the Independent Chapel just across the road became their shared church. However, the old Methodist Chapel has found a new life as a Montessori nursery school.