There has long been a tradition of wood carving in Coggeshall as may be seen from the carved friezes on the outside and the finely-worked paneling on the inside of ancient houses. The church of St Peter-ad-Vincula bears witness to the skill of craftsmen in the 19th-century church restoration and they were the masters who passed on their skills to the 20th century and the last generation of carvers from our own time. 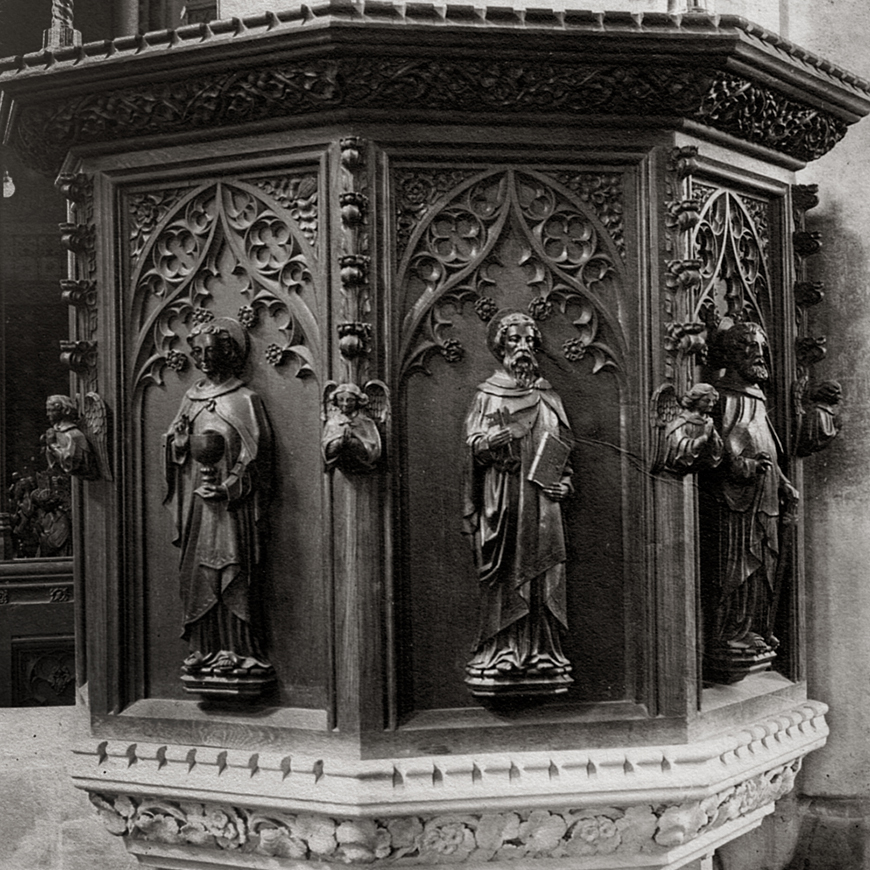 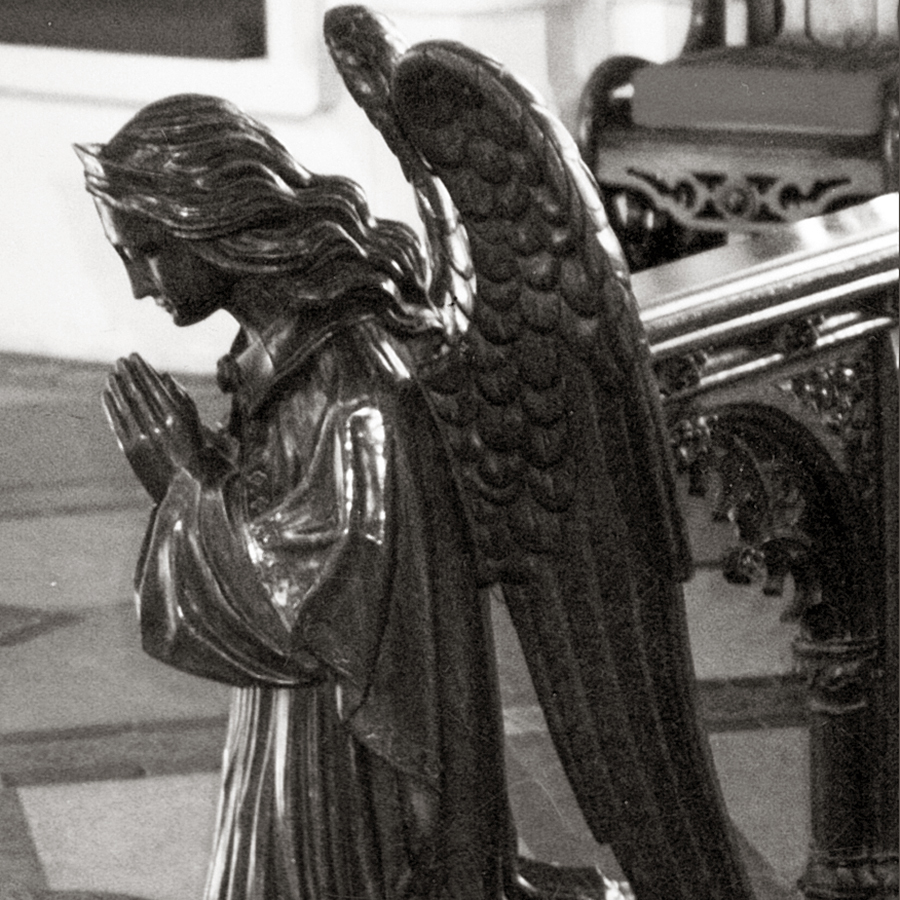 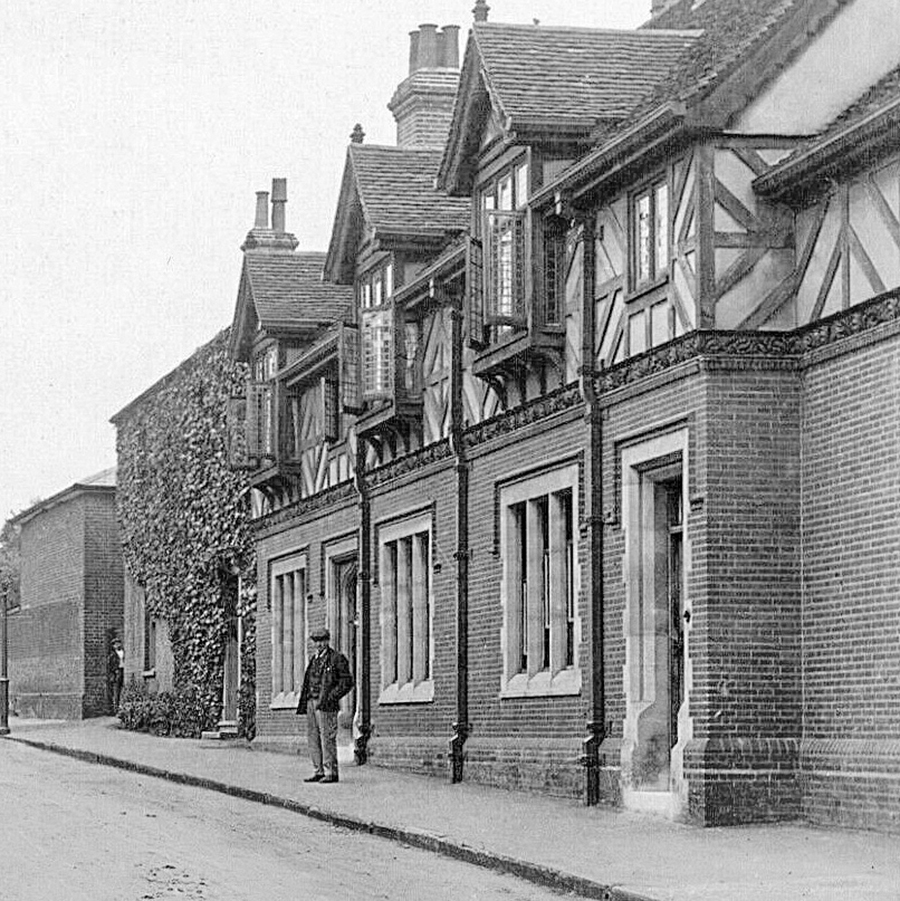 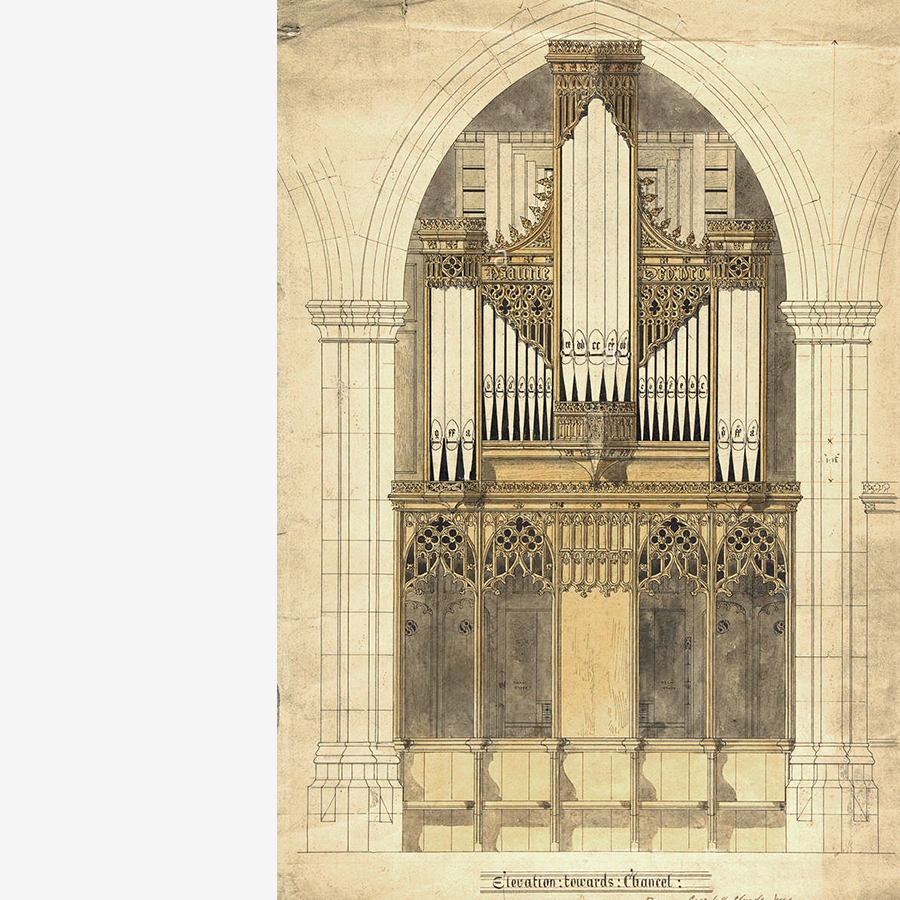 William Polley of Church Street was responsible for much of the best work carried out in the restoration of the church. This includes the oak pulpit, installed in 1871,  the kneeling angels and the altar rails and the marvellous the Rood Screen of 1891. This was controversially removed in the 1950 restoration of the church  and its present location is unknown – it was last seen leaving Coggeshall on the back of a lorry. Polley also carved the organ case of 1896 (designed by the Rev Ernest Geldhart but now also lost – but see Geldharts drawing).

Polley was also responsible for the remodelled facade of ‘The Lawn’ (now called Coggeshall House) on upper Church Street which was carried out in English Oak in 1897 – 98. This can be readily viewed from Church Street and is notable for its linen-fold panelled door, frieze and barge-boards richly carved in a foliated pattern, with an inscription carved into scrolls entwined in the foliage of the frieze: ‘Haec Domus anno sexagesimo Victoria Reginae renovate est’. The work was carried out for the owner of the house George Beaumont, famous for his ‘History of Coggeshall’.

Ernest Wixen Beckwith, born in 1872, was apprenticed to Samuel Polley at the age of thirteen and worked on the screen and the organ case in the church, as his talent for carving was obvious from his early years. By 1892 Beckwith had his own business carving and restoring antique furniture at the back of a house in East Street which the family were to occupy for the next 80 years. This family can be considered to be the foremost of the Coggeshall woodcarvers. 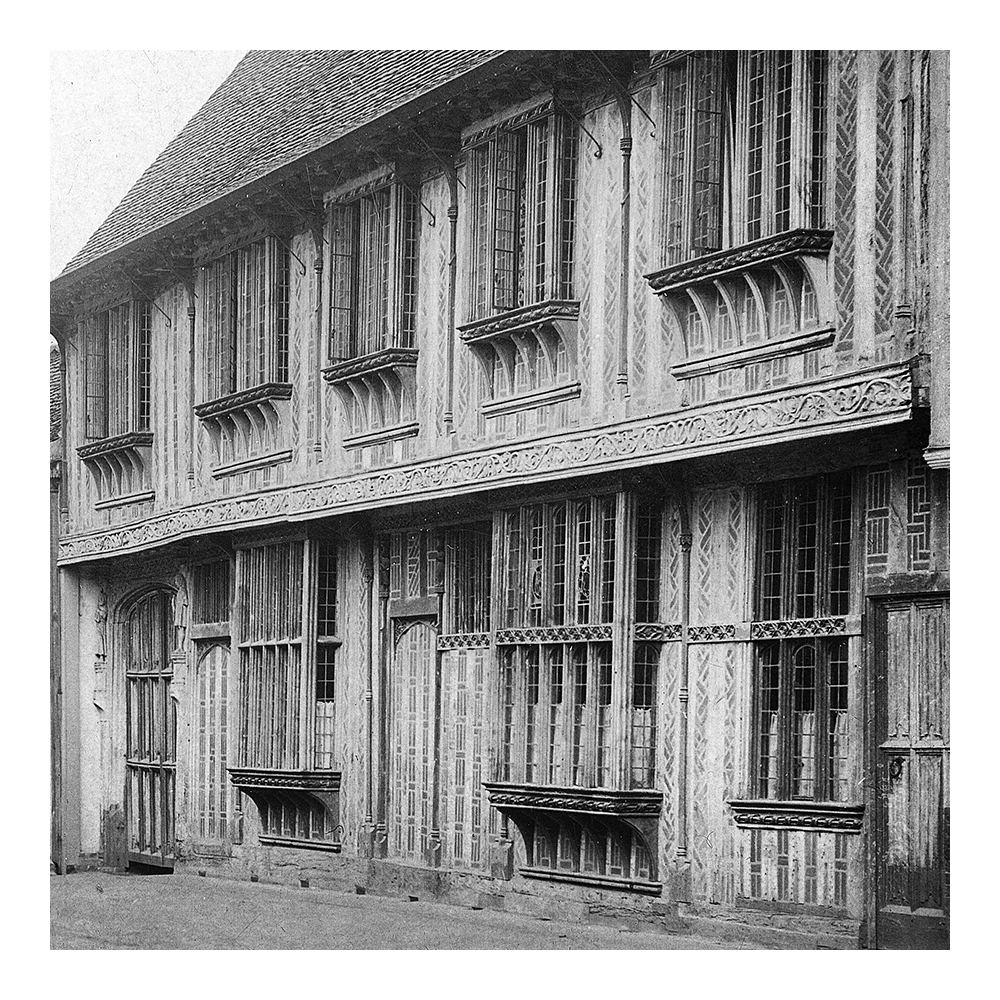 In 1908 Ernest was commissioned to restore Paycocke’s, the richly carved wool merchant’s house in Coggeshall which subsequently became the property of the National Trust. All the windows and some of the carved figures on the front are his work but executed in old oak, so that present day visitors may well think they are original. One of the visitors to Paycocke’s during its restoration was W. F. Crittall, founder of the Braintree metal window firm, and this led to a partnership with the Critall family lasting for over forty years, with Ernest making a lot of furniture for their offices, boardroom and family homes. Lychgates for churchyards were often  erected as memorials after the First World War and the Beckwith workshop usually had one of these huge pieces of joinery under construction.

Partly due to the patronage of local wealthy families the workshop survived the economic depression of the late twenties without creating redundancies and through the following decades Beckwith continued with ecclesiastical and restoration work all over the county and beyond. Ernest died, aged 80 in 1952 but had continued to carve until a few months before his final stroke. One of the last pieces of work he completed was the cross and candlesticks for St Peter’s in Coggeshall.

In 1923 Beckwith’s son Edward joined the family workshop. It seems to have been a somewhat reluctant obligation to family loyalty as his first choice was as a wireless operator in the Royal Navy. At the beginning of the Second World War Edward was conscripted into the War Office because of his keen amateur experience with radio but returned to the family firm when peace came.

After Ernest’s death the craft tradition and the shop selling antique furniture carried on, but unfortunately Edward was not a good businessman and lacked motivation to work and maintain the business. Within a year or so the last employee was paid off and the business and customers rapidly declined.

Andrew, Edward’s son who left school at 15, decided that he would like to try his hand in the family business. Although he had inherited his grandfather’s talent the venture was a disaster from the start as Edward was not interested in teaching and failed to motivate his son. On a snowy January day in 1963 Andrew tramped the streets of Ipswich seeking work as a cabinet maker. He was taken for trial period by an old county firm of antique dealers and furnishers, Green and Hatfield of Northgate. In addition to gaining experience of antique furniture restoration he occasionally had to go to illustrious addresses for repair work to ancient panelling and his skills increased considerably. Later Andrew became a partner in a small antique shop, running it and restoring furniture from a backroom workshop while his partner did the buying. The years together were successful and enjoyable, but personal crises intervened and Andrew spent time in a religious community. But furniture making was never far away as the community chapel was being re-ordered during the 1960s and he was asked to make much of the new furniture. He returned to Suffolk and cabinet making in his home workshop, largely doing restoration work for the antique trade for the necessary income to survive, still years away from realising his wish to create his own style of furniture. In 1992 Andrew returned to Coggeshall after an absence of 30 years and began to acquire local commissions. Changing circumstances made a move to the tiny village of Bowsden in Northumberland necessary and Andrew continues to practise his craft there. In 2007 he was commissioned to make the new organ case for St Peter’s church, just over a century after his grandfather Ernest had done the same. 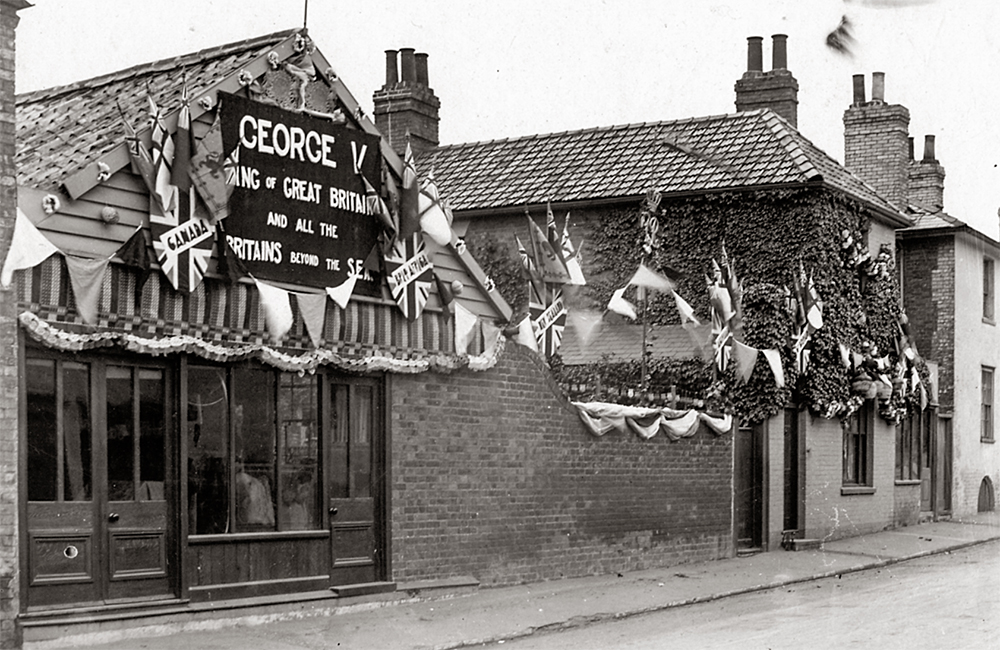 Samuel Marshall was born in 1855. It is not known where he served his apprenticeship but by the 1890s he was well established with a shop and workshop on Bridge Street. He advertised the making of ‘choir stalls, screen and pulpits’ and his work can be found in many churches in the area. He also engaged in more exotic work if called on, in 1914 he  travelled to Rowhedge to work on the figurehead of the SS Beacon which was being repaired in a shipyard there. He was responsible for the carved figures in the sanctuary roof of St Peter’s and in 1902 and 1903 worked with Beckwith on the complex and expensive screens of the side chapels and the nave of St Peter’s church. In 1907 he took as apprentice a fourteen year old local lad, Bryan Saunders, who was to prove a talented wood-carver. Samuel was a pillar of the Church of England Temperence movement and addressed meetings on the subject across Essex. Having been a student at the Hitcham School in his youth, he returned there in his middle years to teach some of the boys wood-carving and this proved so successful that he was invited to teach the subject at other schools in Essex. In 1914 and anxious to retire, Marshall offered the business to Bryan Saunders, who had just completed his seven year apprenticeship but the First World War intervened and it was not to be. In 1915 Samuel carved regimental arms on the bench-ends of Danbury church to record the affection the villagers felt toward the soldiers who had been billeted there.

Samuel had a son, a teacher and talented pianist and organ player, who had joined up but tragically, whilst serving in the Royal Suffolks, died of wounds after a bombing raid in Calais. Samuel Marshall continued to work at his Bridge Street workshop until he retired in the 1920s and the business shut down. Samuel died in 1934 aged 79 leaving a daughter, his wife having pre-deceased him. 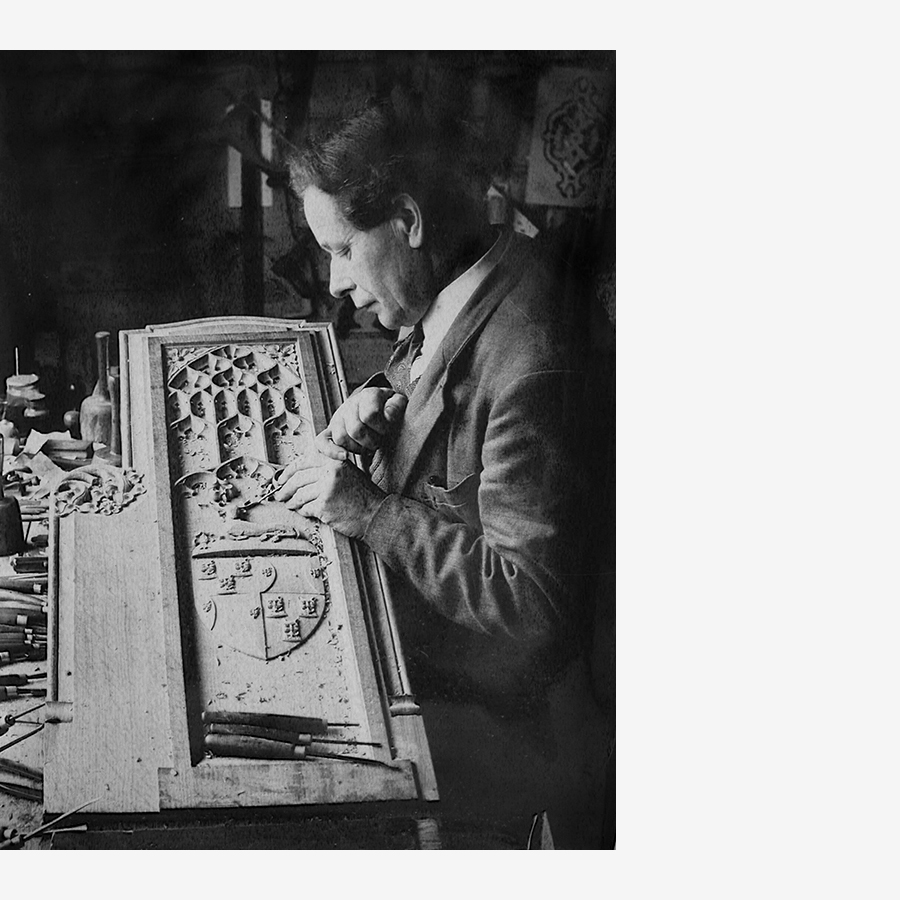 Bryan Saunders completed his apprenticeship with Samuel Marshall in 1914 and he then tried to enlist in the Forces but was turned down. In 1919 he set up his own workshop on Market Hill, a house he was to occupy with his wife and two daughters until his death in 1973. Commissions both large and small came his way and he was so busy that in 1929 he took on an assistant, Ernest Prentice, a qualified carver who had served his apprenticeship at Marshall’s alongside Bryan. The business thrived but the advent of World War Two brought changes for both Bryan and his assistant. They first worked at Marconi’s in Chelmsford and later on Bryan was called upon to utilise his skills by making special boxes for secret documents. After the war he was back in Coggeshall following the craft that he loved, although Ernest never returned to full-time carving. The post-war years were busy ones with Bryan’s reputation for fine carving spreading far beyond his native Essex, even to the USA.

But his health was deteriorating and eventually he was diagnosed as suffering from cancer. Typically, he carried on working until just weeks before his death which came peacefully at home, with his wife and daughters at his side, in 1973. His work is in many churches and homes and the seats he carved for the commemoration of the Festival of Britain in 1951 can be seen in Coggeshall at the present day. His daughters have donated his workbench, tools, papers and unfinished work to the National Trust and it is now housed as a separate exhibit in Coggeshall Grange Barn.