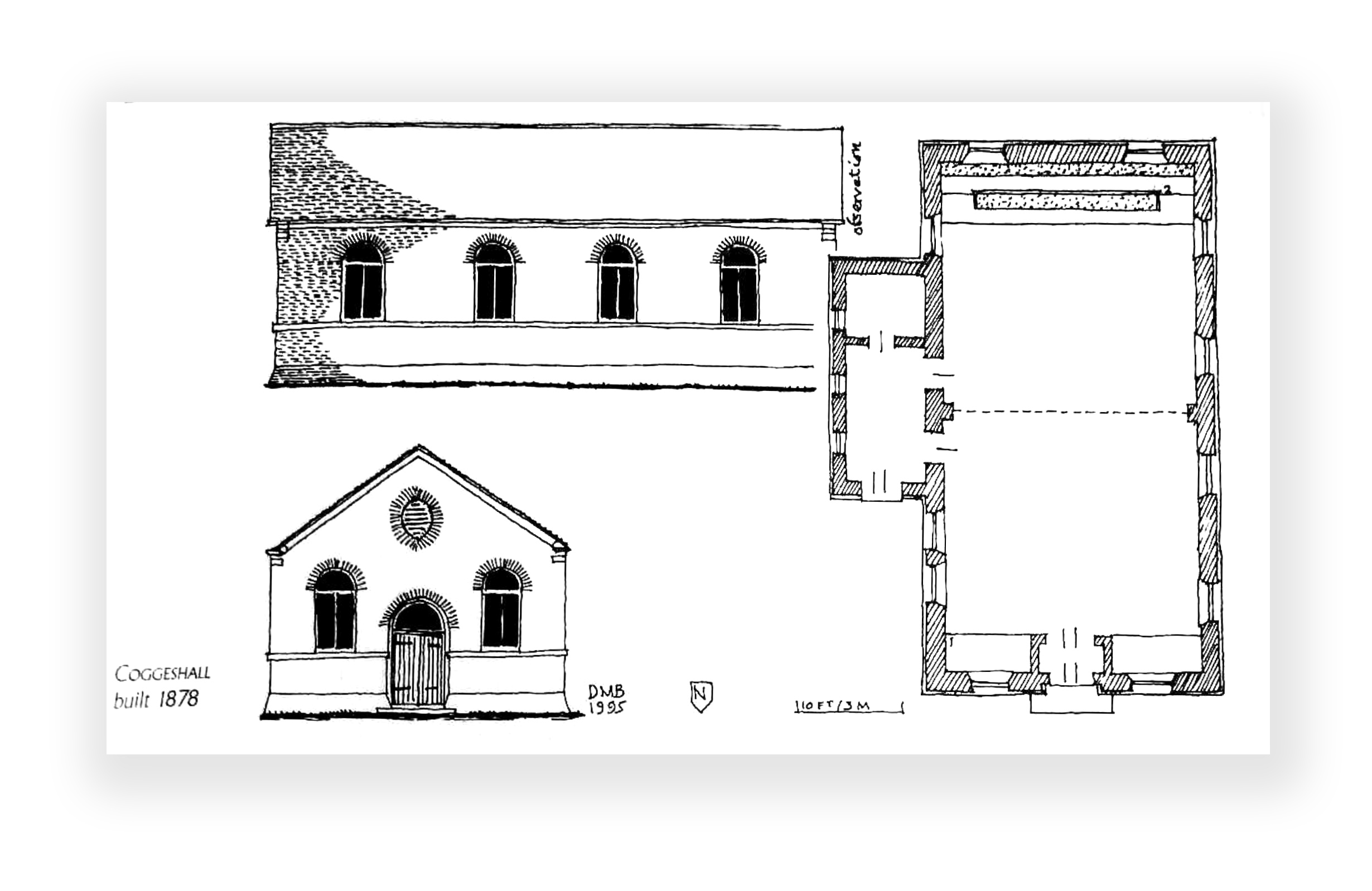 Drawing of the last Meeting House

The Religious Society of Friends, also called the Quaker Movement, was founded in the 17th century by George Fox.  Quakers were persecuted for their beliefs which included the idea that the presence of God exists in every person, they were pacifists and refused to take legal oaths. Quakers rejected elaborate religious ceremonies, had no official clergy and believed in spiritual equality for men and women.

The Quakers had one of their first strongholds in Coggeshall. It’s founder, George Fox, came here in 1655 and spoke to a meeting of two thousand people. The Quaker missionary James Parnell visited Colchester early in 1655 and then walked to Coggeshall to meet Fox but his movements had been watched and he was arrested here and taken to Colchester Castle. He was imprisoned and later died of starvation and neglect aged only nineteen. At this time many Quakers were fined and imprisoned for refusing to pay tithes or take oaths.

Requiring no church Quakers could meet anywhere and in those early years used private houses. They did however need their own graveyard as they could not be buried in consecrated land. Coggeshall’s first Quaker burial ground was at Crouches, acquired in 1693 on a 480 year lease. 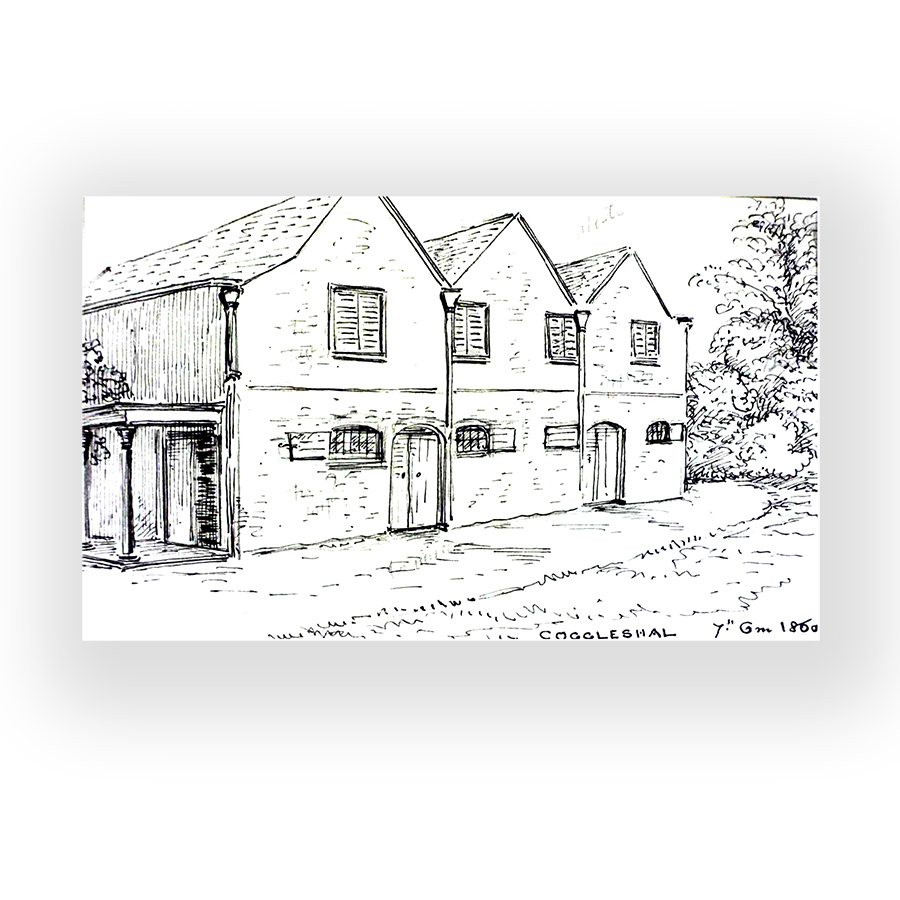 According to Butler, (Butler M, The Quaker Meeting Houses of Britain, 1999, vol. 1, pp. 178–9). The first permanent meeting house was a large structure (seating 500) built in the early eighteenth century, on the site of the present building and which stood within the burial ground.  A meeting house was certainly in use in 1747 but this was replaced with a new structure in 1809-10. This may be the one illustrated here with three parallel gabled roofs facing the street, with a single internal space, the roof carried on two pairs of columns and a loft along the back wall. Butler describes the building as ‘unlike any other’.

In 1750 the Coggeshall Meeting had 106 members, more than Colchester. The original burial ground was enlarged in 1706 but was said to be full in 1783. The Quakers owned numerous small and large pieces of ground and houses – some used by the Society and some leased to provide income. Most of it in Crouches or Stoneham Street, including a site on which the Vestry built a workhouse in 1801. In 1856, a burial ground was opened at Tilkey which is still there, next to Tilkey Cottage.

The Doubleday’s were an influential and philanthropic Coggeshall family closely linked to the Quaker cause. William Doubleday and his wife Hannah, had started their Coggeshall grocer’s shop in 1789 and they are first mentioned at the Meetings from 1797. They had eight children and William junior (born 1805) stayed with his father to help run the grocery business.

William’s fourth son, Henry, was equipped with a remarkable brain, he had no interest in the grocery business but followed his own interests and has his own story; Henry Doubleday. In 1854 William junior took over the shop on the death of his father, and in turn, his son Thomas worked as an apprentice in the family business and later became the owner. In 1889 the shop commemorated its Centenary by issuing china with transfer prints of the shop on the pieces. The last of the Coggeshall Doubledays, Thomas, attended the Coggeshall meeting until he died in 1961 and is buried with other members of his family in the Quaker burial ground at Tilkey. The family did much for the people of Coggeshall and Thomas is still remembered with affection for his charitable work, and the newly-created Doubleday Garden is a lasting reminder of this Coggeshall family.

The original meeting house was replaced in 1877 by the present building on the same site, from plans furnished by William Doubleday (1846-1938), an architect who had his practice in the Midlands and the son of Coggeshall’s ‘oldest friend’, William, who was born in c1807. The new meeting house seated about 120 in two equally-sized chambers, which were originally separated by ‘a single large sash shutter’(Butler).

The number of members began to decline; in 1885 there were 23 and in 1888 there were 21. By 1959 there were only eleven members left and in 1965  the Meeting was closed and the Meeting House leased to the County Council for use as a public library. The original fittings were stripped out without being recorded as far as I am aware, and it remains as a library today.