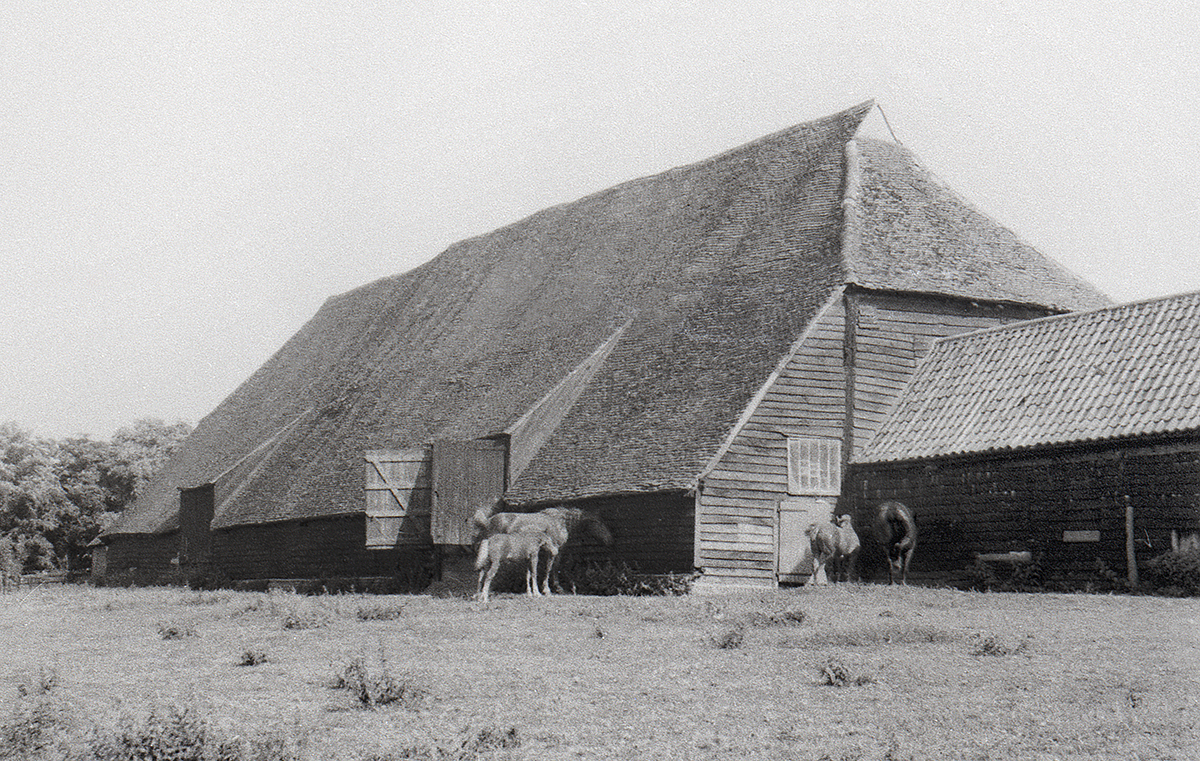 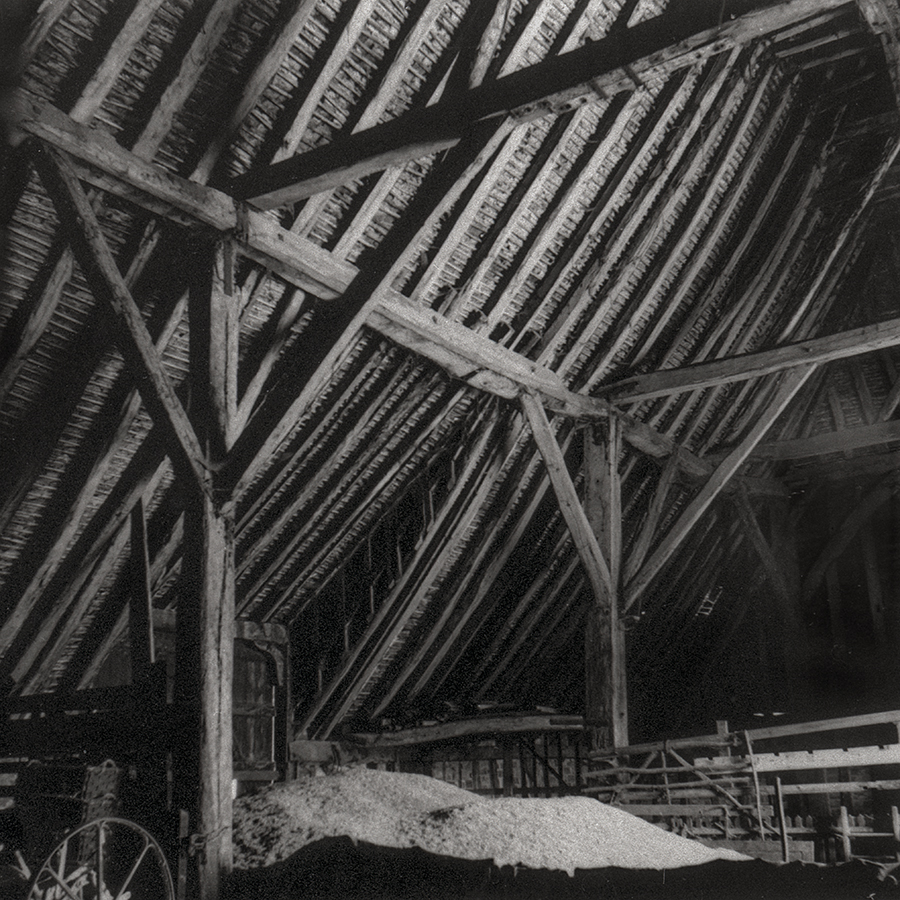 Dating from around 1240 the Grange Barn is one of the oldest timber framed buildings in Europe. It is a huge structure measuring 120 feet long by 45 feet wide and 35 feet to the apex of the roof.

The barn was built by the lay-brothers of Coggeshall Abbey to hold the produce from their extensive land holdings as well as the the tithe, a tenth share, paid in produce from their tenant farmers.  When the Abbey was dissolved in 1538 the Barn passed into private ownership. 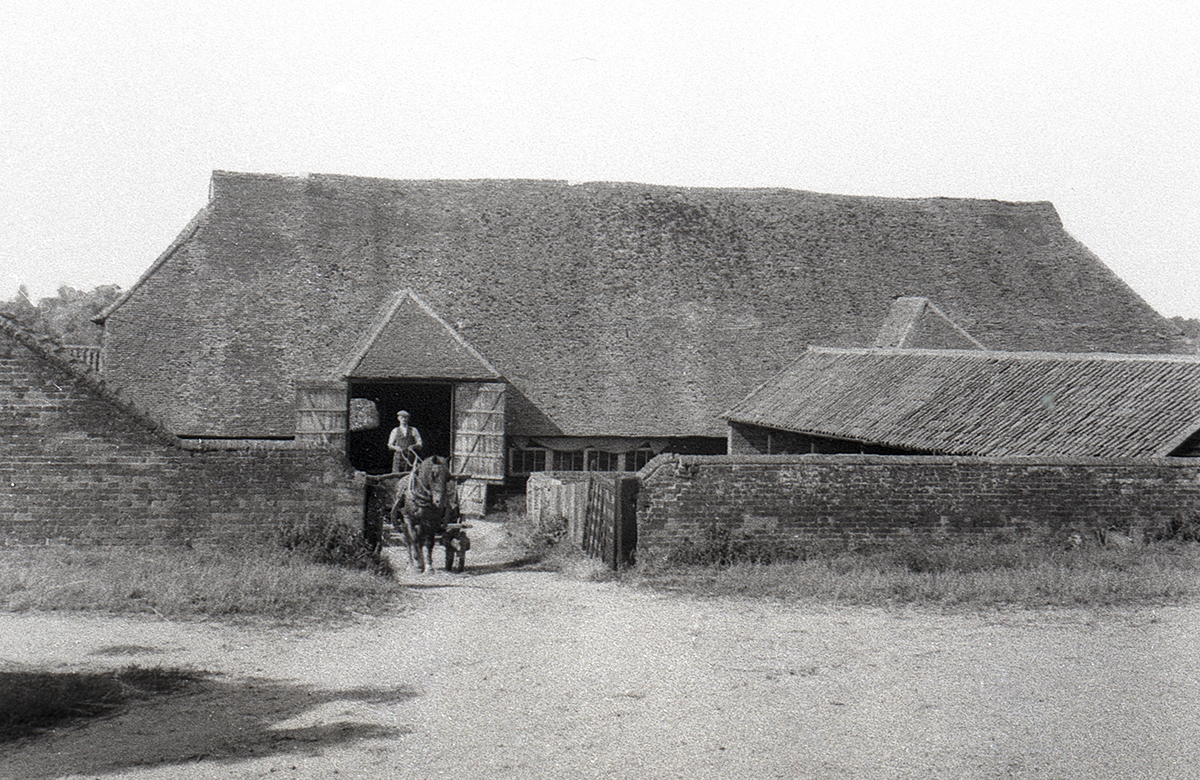 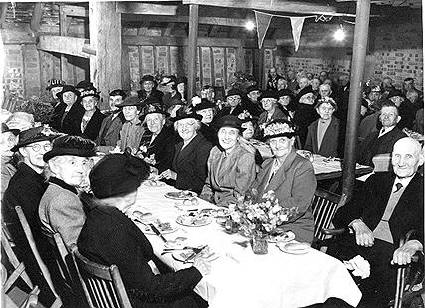 During the Second World War the Barn was used as a social centre for Coggeshall folk as the village’s community hall had been taken over as a recreation centre for the airmen who served at the adjacent airfields.

The building survived without significant change until 1958.


In 1958 the new owner of Grange Farm decided that he had no use for the barn or any inclination to care for it. As time went on the structure of the building was abused and began to deteriorate. By 1966 it was in a sorry state despite the fact that it’s status had been raised from Grade II to Grade II* – but not the Grade I it warranted.

At this time most experts had assumed that the oldest barns, including the Grange Barn, dated from the 1500’s.  Pevsner in his Essex survey had himself dated the Grange Barn to ‘about 1500’. This prevailing orthodoxy was about to be overturned – and as it happened the country’s leading expert in the developing field of historic carpentry happened to live in Coggeshall. Cecil Hewitt made a detailed examination of the barn’s structure and his report in November 1971 gave the earliest parts of the barn an astonishing twelfth century date. So-called experts ridiculed Cecil’s work, however analysis by carbon dating confirmed it. Until this pioneering work no one had any idea of just how ancient some of Britains barn’s were.

Meanwhile, while the building deteriorated, inaction, incompetence and indecision on the part of the authorities made the final destruction of the building appear inevitable.

In 1971 the Coggeshall Society and the Parish Council bravely offered to buy the building but the owner refused and continued to be uncooperative. This discouraged the Historic Building Council from offering financial help. The County Council also offered to buy the barn and in turn they were refused. Access seemed an insurmountable problem with the owner denying entry through his farmyard and the adjoining owner refusing access across his private road. Despairingly the option now being considered was to dismantle and store the structure for possible resurrection later.

In 1974 Coggeshall was designated a Conservation Area – which included the barn – and this helped keep the future of the barn in the limelight.

It was at this time in December 1974 that the owner applied for listed building consent to demolish the barn. It was also the year in which the ‘Grange Barn Fund’ was formed – a local group fighting for the barn’s restoration and led by Graham Fraser-Steele and the indomitable Phyllis Wood.

In April 1975 Braintree District Council ‘reluctantly’  granted the application to demolish. The matter was then referred to the Secretary of State, who decided to order a Public Inquiry and this took place in December 1975. 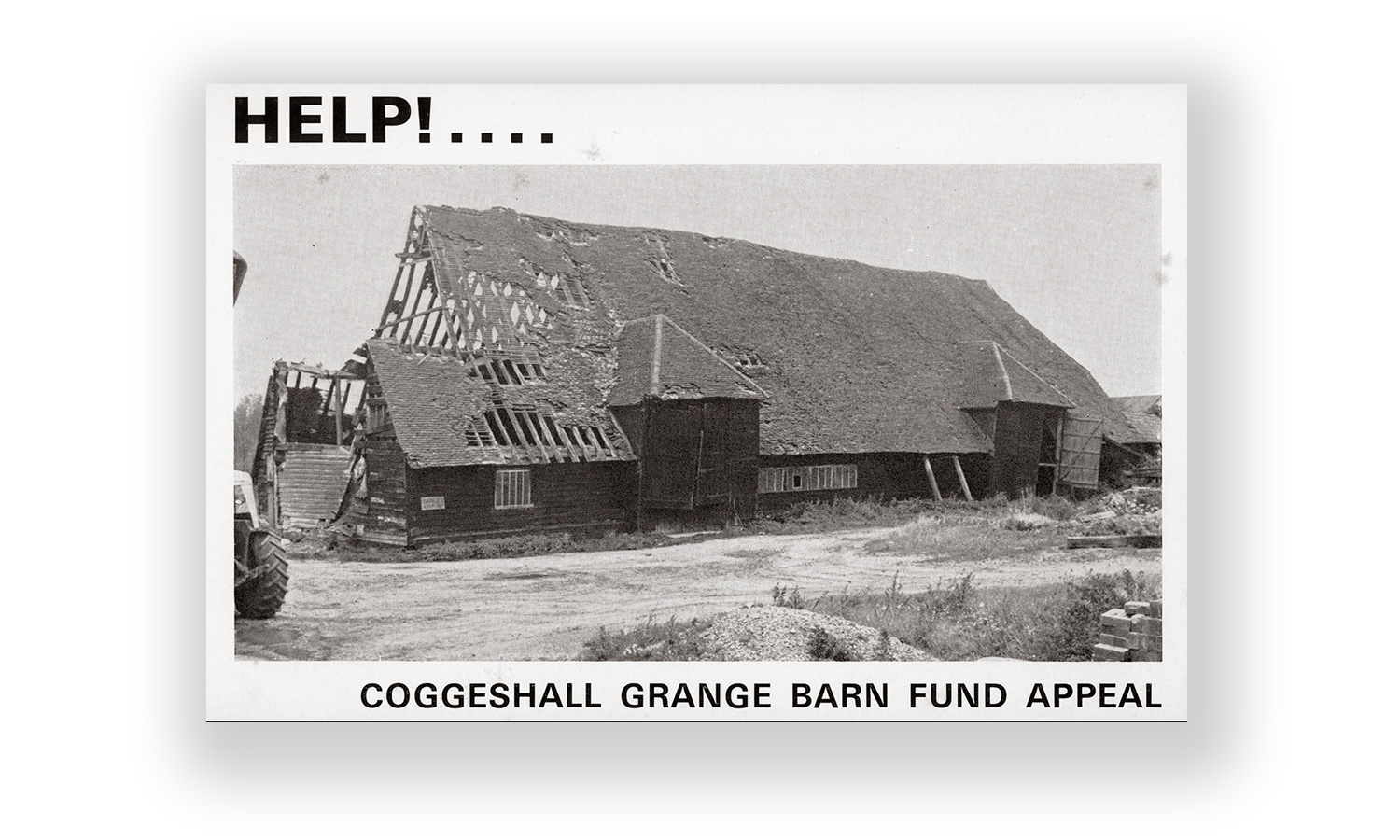 1971 and the Grange Barn Fund group was established

The inspector found in the barn’s favour but euphoria was short lived as the owner still refused to co-operate in any way and Braintree District Council, concerned that they may find themselves with a financial burden, decided to take no further action.

At this time the barn suffered further collapses and its condition was deteriorating rapidly. In September 1975 two of the western bays collapsed and in 1977 the eastern end suffered the same fate. At this stage the estimated cost of renovation had risen from £25,000 to £65,000. The members of the Grange Barn Fund had almost capitulated in agreeing to dismantle and store the barn but in a last ditch effort again appealed to the Secretary of State to break the impasse. In reply, finance was offered to take down and re-erect the barn and the Fund members came very close to accepting this – but were not yet quite convinced, even at this late stage, that this was a proper course.

A meeting was then arranged with the Historic Buildings Council and this time all the parties interested in saving the barn attended – County and District Councils, Historic Monuments, Barn Fund, Historic Buildings Council, Society for the Protection of Ancient Buildings (SPAB) and Save Britain’s Heritage. The upshot was a decision that the barn ought to be saved in situ and £60,000 of the then estimated cost of £120,000 was offered by the Historic Building Council. The SPAB also agreed to offer the District Council £2,000 toward the legal costs of applying for a Compulsory Purchase order for the barn. The National Heritage Memorial fund then agreed to compensate the owner for the compulsory purchase (!!!).

In October 1980 Braintree District Council served a repair notice on the owner – to no effect of course and this led to the Compulsory Purchase Order being served in March 1981. The Grange Barn Fund managed to get planning permission for a change in use – so that in time any income might help in the upkeep of the building. The Fund also begged for guarantors to a total of £10,000 – these were essential for the organisation to demonstrate that it ‘had some substance’. This target was achieved with individuals promising amounts from £100 to £500 (Fortunately we were never called on to produce the cash!). The Fund was at this point reformed as the ‘Coggeshall Grange Barn Trust Limited’.

Both the barn’s owner and the owner of the adjacent roadway and estate decided to oppose the Compulsory Purchase Order and this led to a second Public Inquiry in September 1981. Huge jubilation greeted the result in March 1982 when the compulsory purchase was upheld. 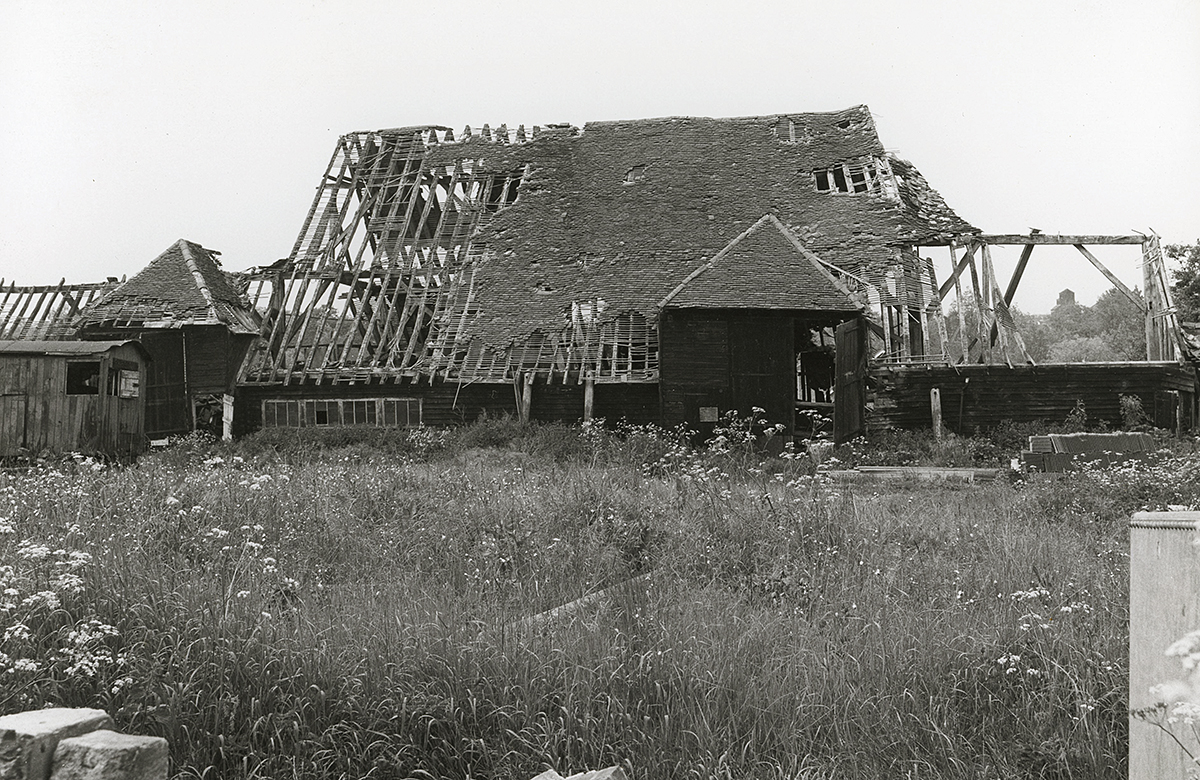 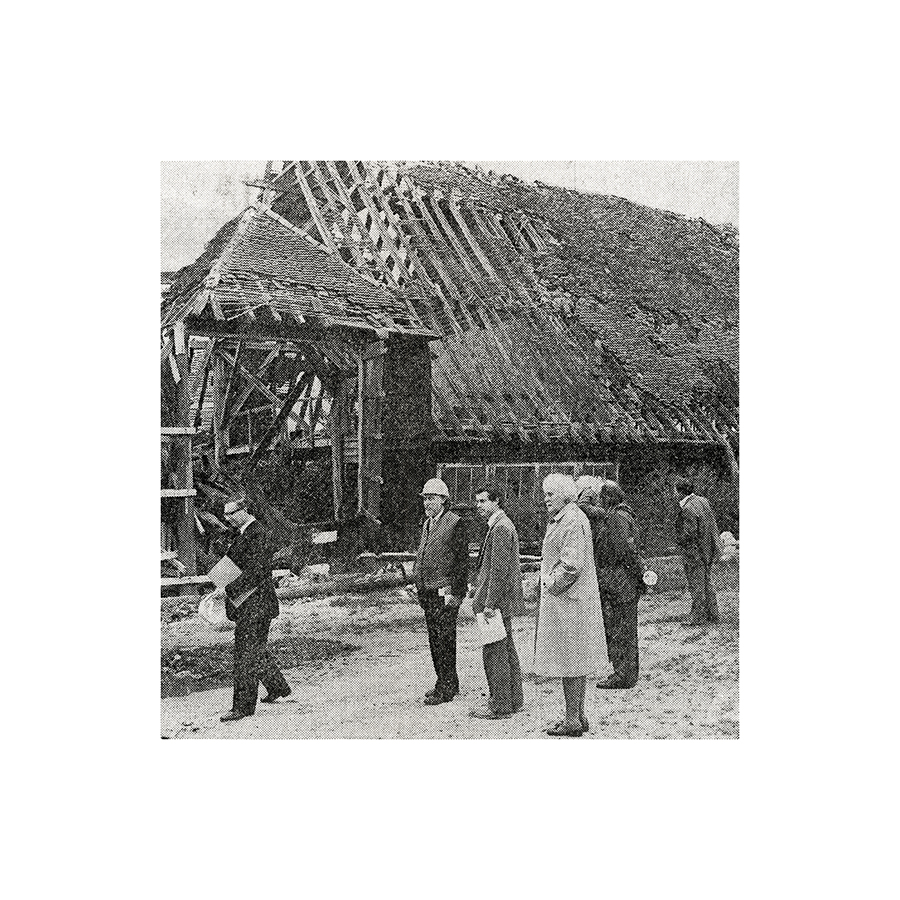 From ‘The Times’ September 25th 1981
As part of the second Public Inquiry the Inspector and interested parties visit the site. Phyllis Wood is closest to the camera.


Restoration work could not begin until the spring of 1983 but the condition of the barn was so poor that it was thought that another winter might finish it off – so hard-gained funds had to be spent making temporary repairs so that some of the building might be standing when restoration started.

Within two years the heap of timbers that made the barn was reassembled with as much of the original structure as possible retained. The 80,000 peg tiles used on the roof came from a housing estate built by the old London County Council. 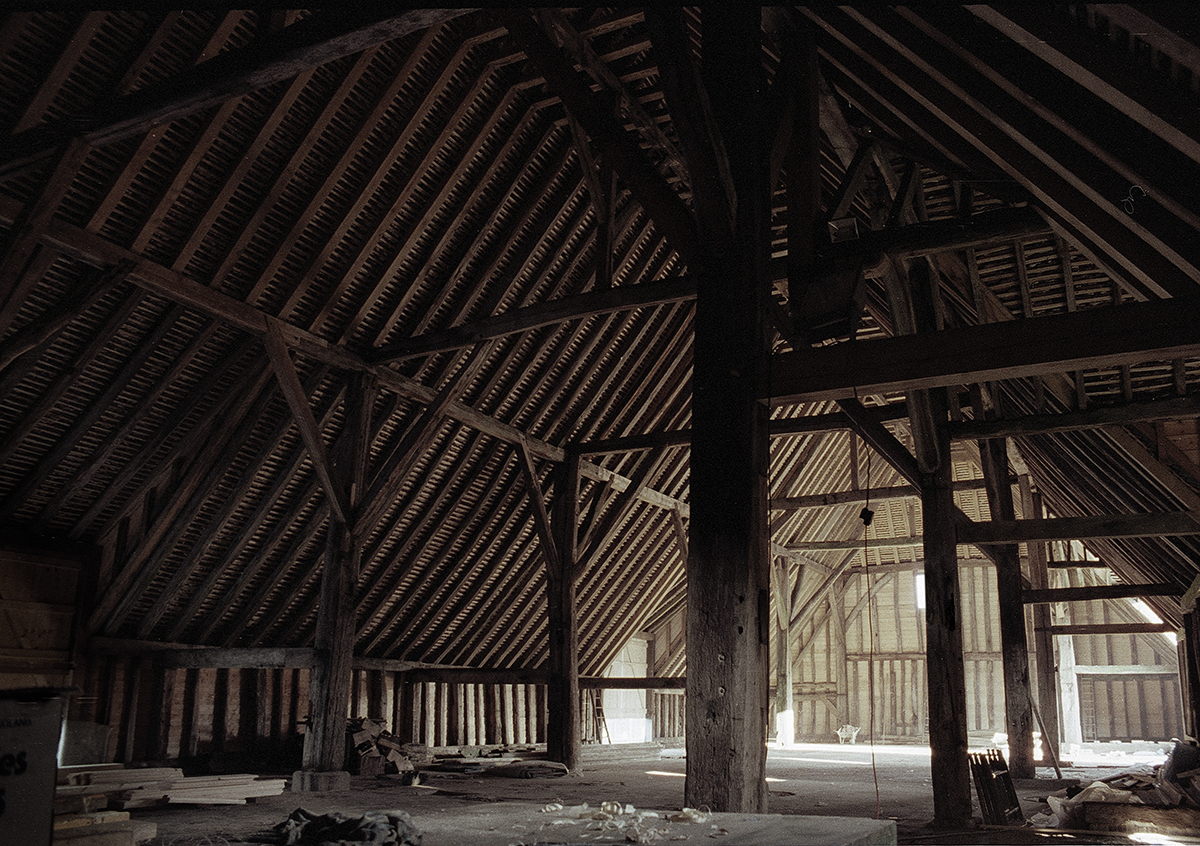 The Grange Barn during restoration 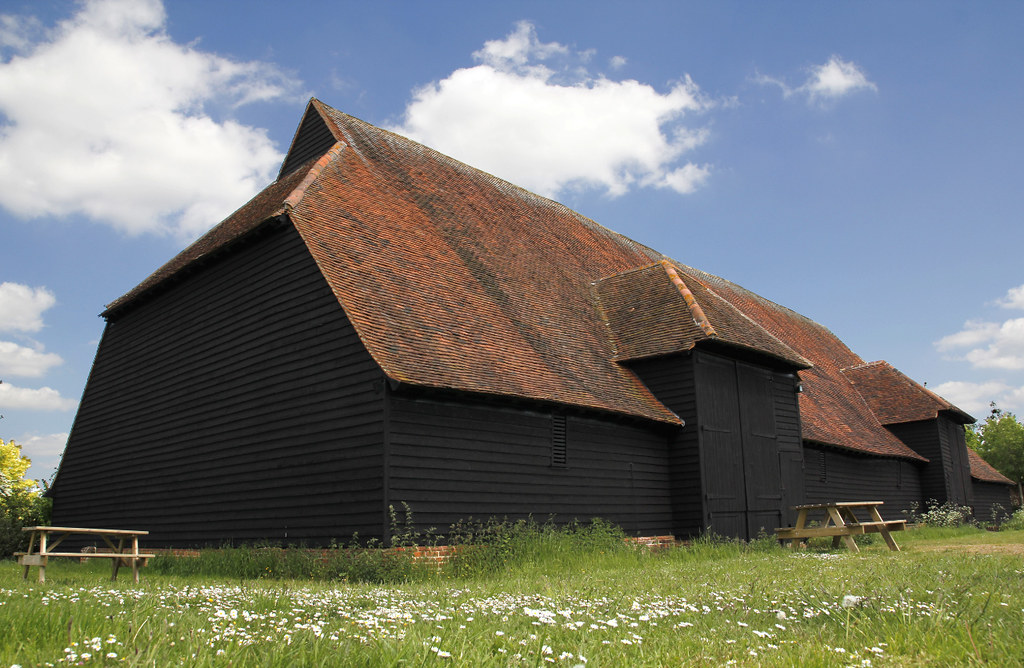 In 1989 the National Trust took over ownership of the Barn, which is now open to the public from the end of March to mid-October. The museum has loaned the National Trust a selection of medieval tiles from Coggeshall Abbey and these are on display, along with some Coggeshall bricks. The museum has also provided some interesting film footage of the Barn’s reconstruction which shows the daunting scale of the challenge facing the restoration team during 1982-84.