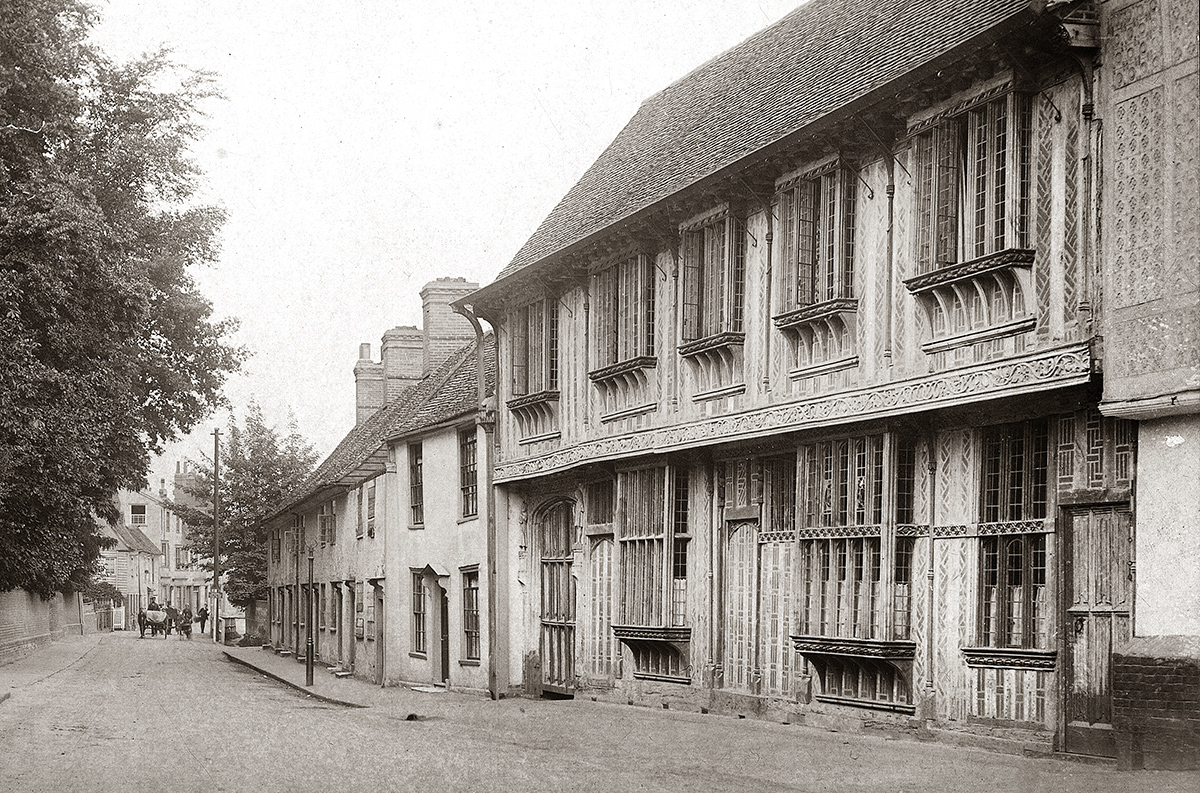 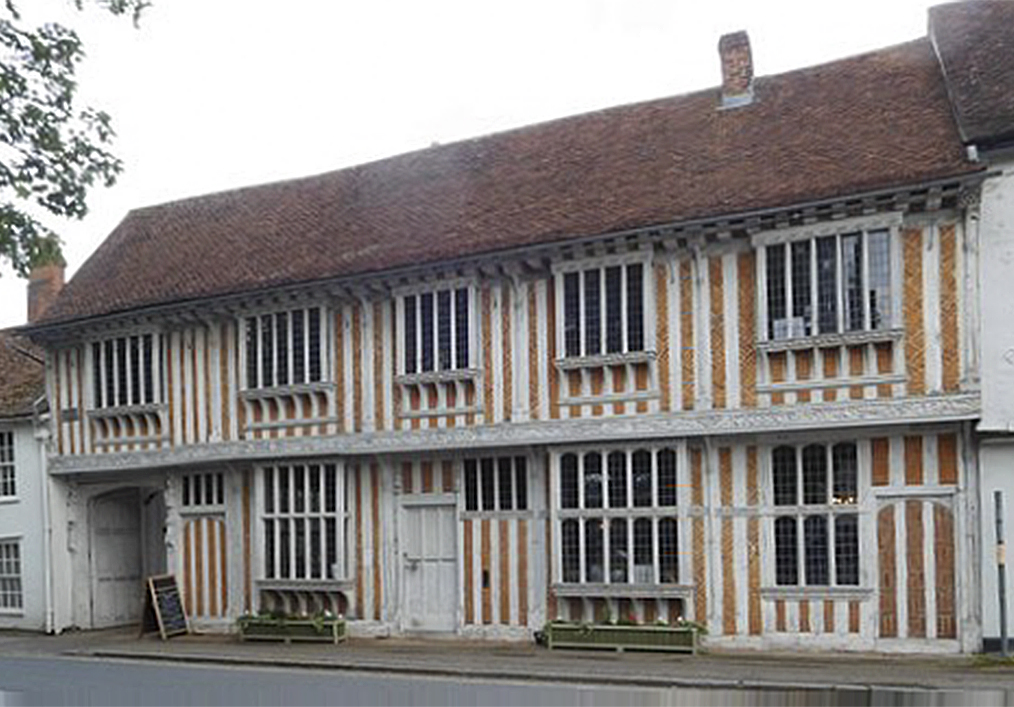 This fine 16th century timber-framed house in West Street is one of the jewels among the many interesting buildings in Coggeshall and is a legacy from the town’s prosperous “Wool Age”. It is now in the keeping of the National Trust. It was built in the very early 1500s by the youngest son Thomas and his bride Margaret Harrold, and their initials along with the Paycocke merchant mark are carved both inside and out. Various manufacturing stages would have been undertaken by workers around the town and carts carrying the materials and cloth would have passed through the great carved oak gateway. 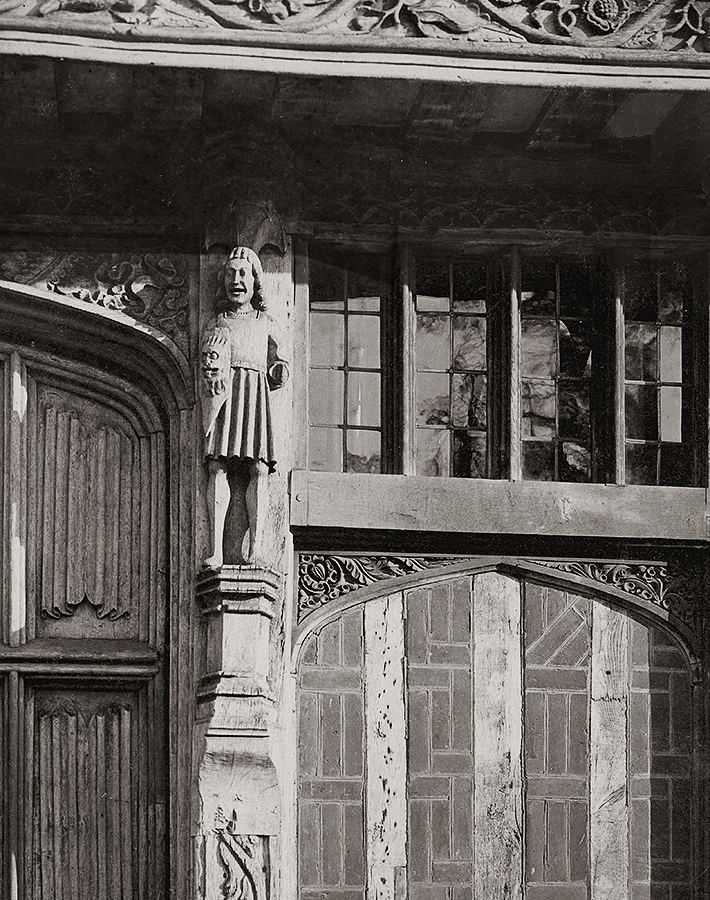 The house remained in the Paycocke family until 1584 when, after the death of John, the great-nephew ofThomas and the last male of his line, the house was sold to the Buxton family who had owned property in Coggeshall since 1537 and were related to the Paycocke family by marriage.

In 1746 the Buxtons sold the house and little is known about it until about 1880, save that it was converted into three cottages and had fallen into a sad state of dereliction. The house was about to be demolished and it’s timber had actually been sold for re-use but was saved at the last minute by the efforts of G F Beaumont (author of the ‘History of Coggeshall’). It was then bought by Charles Pudney, a local carrier, who in September 1904 then sold it to Lord Noel Buxton, a descendant of the original Buxton family.

Plans were drawn up and approved by the famous architect Sir Edwin Lutyens and the restoration carried out by a local wood carver, Mr E W Beckwith. By 1906 the house was largely complete and furnished.

During Buxton’s restoration of the house, it was the home from 1904 (rent free) of a relative, Conrad le Despenser Roden Noel and his wife Miriam. Conrad Noel was later to become infamous as the ‘Red Vicar’ of Thaxted. It was Noel who pursuaded Buxton to use the local woodcarver and joiner, Ernest Beckwith, to undertake the restoration rather than the well known firm of professional architects that Buxton had initially favoured. Noel wrote of his time at Paycocke’s, ‘It had exciting disadvantages … we lived in an atmosphere of dust and white-wash and broken plaster … the cold was so intense that we sometimes sat over the fire in the hall with its wrought-iron basket and logs of wood surrounded by a tent of screens … in the breakfast-room the pigeons, and even robin-redbreasts, and other cheeky little fellows would insist on sharing our meals, hopping about the table and pecking at the butter and carrying off other titbits.’  It was Miriam, a keen gardener, who set out the garden in the Arts and Crafts style with stepped terraces, a writing shelter and a dovecote – and also a tennis court. The yard was covered in herringbone brickwork. The house was usually damp and sometimes flooded and after the Noels left in 1909 these circumstances made the house difficult to let. Buxton later ‘made improvements to render it more habitable in winter. He put in central heating and a damp-proof course and introduced more light into the dark panelled rooms. People were now able to read books and newspapers in the daylight’ (from Noel’s autobiography)

In 1923 Noel’s friend Gustav Holst recuperated in the house after an injury; his daughter Imogen, then 16, wrote to a school friend, ‘This house is absolutely too wonderful for words … it is a dream. And it is great fun living in a dream …The house is supposed to be the best example of the period in the whole of England, and artists and architects make pilgrimages from all over the country to see it. We are tremendously proud of it, and as it isn’t our own we can swank about it to our heart’s content.’

In 1924 Buxton, who only occasionally used it, presented the house to the National Trust.

Paycocke’s was almost destroyed on 23rd October 1928 when a serious fire broke out on the stairs, quickly spread to a bedroom and then set the roof on fire. Things looked so desperate that the crowd who gathered to watch were organised to salvage the furniture and paintings. By then the Coggeshall Fire Brigade had arrived and fought their way up the stairs to bring the fire under control and save the building. 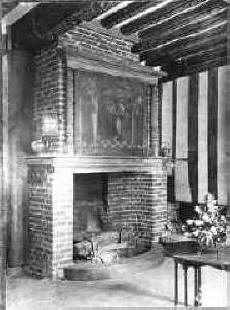 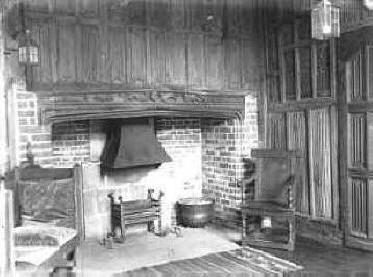 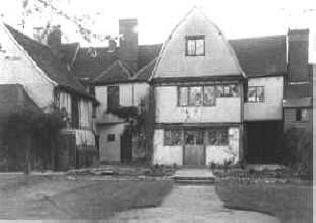 Paycocke’s House and Gardens are open to visitors.

Link to the National Trust Paycocke’s House page for the latest information and opening times.

Coggeshall  Grange Barn is also under the care of the National Trust.