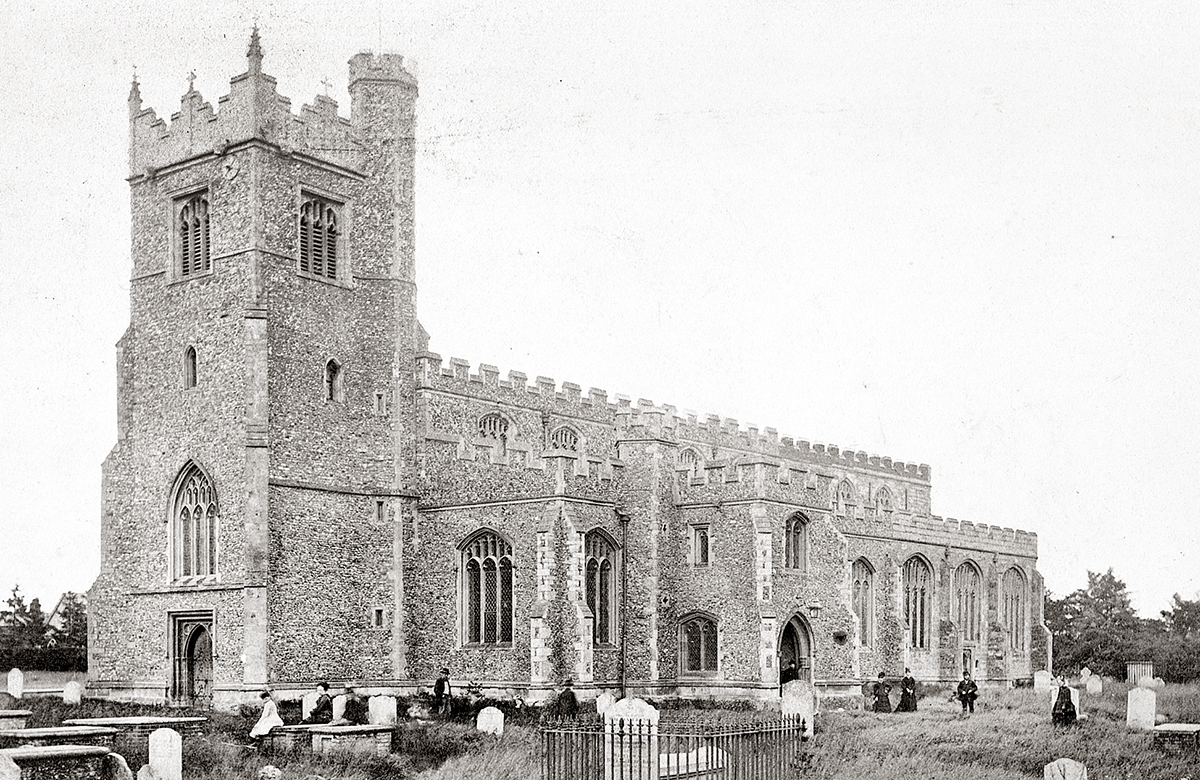 The church of St Peter-ad-Vincula stands on the site of at least one and possibly two, earlier churches, Saxon and Norman. It is one of the largest in Essex (only Saffron Walden and Thaxted are bigger) and is one of the finest examples of the Perpendicular style of architecture in the county.

It shares with the chapel in the Tower of London the rare dedication to St Peter-ad-Vincula (St Peter in Chains) and was built in the 15th Century, a prosperous time in Coggeshall’s history, with its wealthy wool merchants pouring money into the building of the church.

The Paycocke family was solely responsible for St Catherine’s chapel which stands to the north of the chancel. Memorial brasses can be seen in the floor including the ones of John Paycocke and his wife Joan, dating from 1533. There is a brass of Thomas Paycocke who died in 1580 and left a charity ‘for the continuall relief of the poore of Coxall for ever’ – the charity is still in existence today. A lot of the brass is now missing, although it is described in  Beaumont’s ‘History of Coggeshall’, published in 1890. 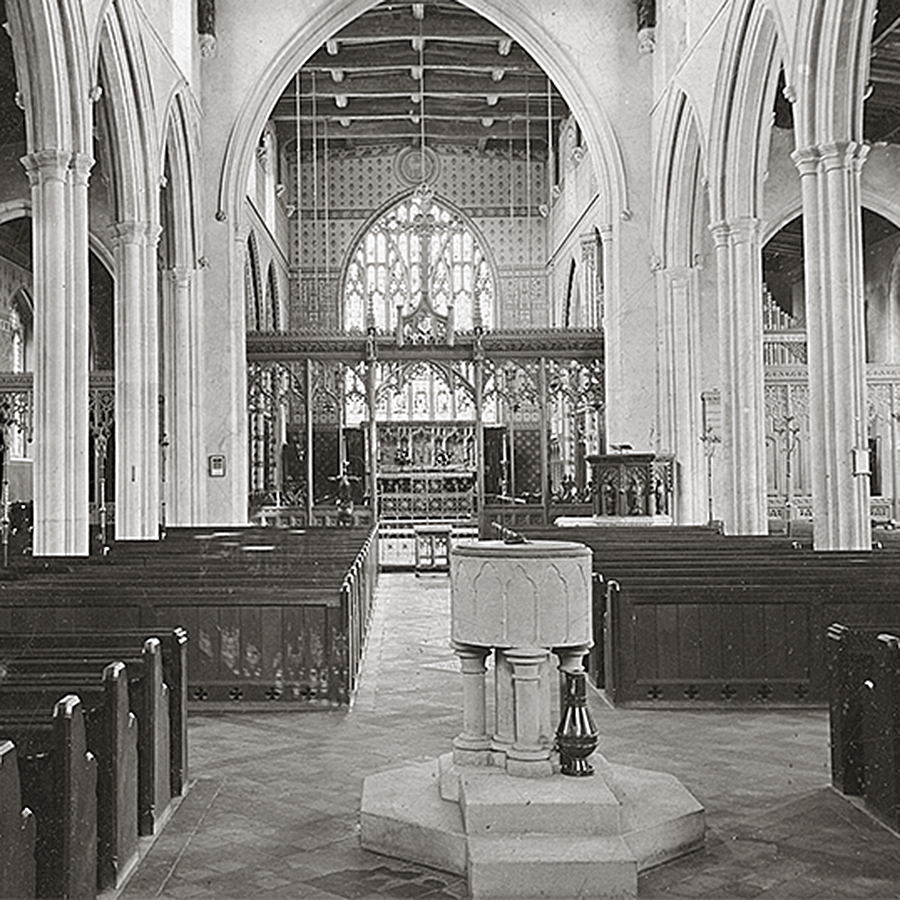 When the Rev James Dampier arrived in 1841 the church was in a parlous condition, the roof was close to collapse and the buttresses and windows were crumbling. Remedial work probably started in 1850 and by the end of 1851 the roof had been repaired and re-leaded and an old wooden gallery which stood at the western end of the nave was being taken down. In 1851 a new  curate, the Rev Cutts, was appointed and he was both a distinguished antiquary and expert in church architecture and soon took the lead in raising funds for the continuing work of restoration.  In 1855 the entrance doors in the porch were replaced with copies of the originals, the carving carried out by a Mr Barleyman who then emigrated to New Zealand and became a barrister! The Coggeshall joiner and woodcarver, William Polley, from Church Street carried out much of the new work including the choir stalls, altar rails, pulpit and a magnificent organ case of 1895 (now lost) which were all commissioned over a period of several years to designs made by the Rev Ernest Geldhart, the vicar of nearby Little Braxted. The finely carved rood screen was also the work of Mr Polley to Geldhart’s design and was installed in 1891. The delicate wrought-ironwork gates at its centre were by an unknown hand and like the screen are now lost. Carved oak screens to the north and south of the choir stalls were erected by a Coggeshall Vicar, Rev C C Mills and his brother. The screen at the entrance to St Catherine’s Chapel, commissioned by the Rev Patch as a memorial to his late wife, was put up at Christmas 1902  and its partner to the south, paid for by the parishioners, was completed in 1903; both are the work of Coggeshall woodcarvers, Samuel Marshall of Bridge Street and Edward Beckwith of East Street again to designs by Ernest Geldhart.

A reredos was commissioned as a memorial to the Rev Dampier and dedicated in 1880. it was designed by Mr Ewan Christian, the architect responsible for the restoration of the church and was executed by Mr Forsyth, sculptor of Finchley-Road Hampstead, and carved from Caen stone and Derbyshire alabaster.

The opening of the restored church was in Victoria’s Jubilee year 1887 although the scheme took a further twenty years to complete. Pictures taken early in the last century show the finely carved rood screen and the walls heavily stencilled in the Victorian fashion. The font is ancient and came from the church at Pattiswick and was in use as a garden trough at the time of its rescue. The east window is over 24 feet in height and nearly 15 feet wide – the stained glass is a fine example of the work of Clayton and Bell and was donated by the Hanbury family. 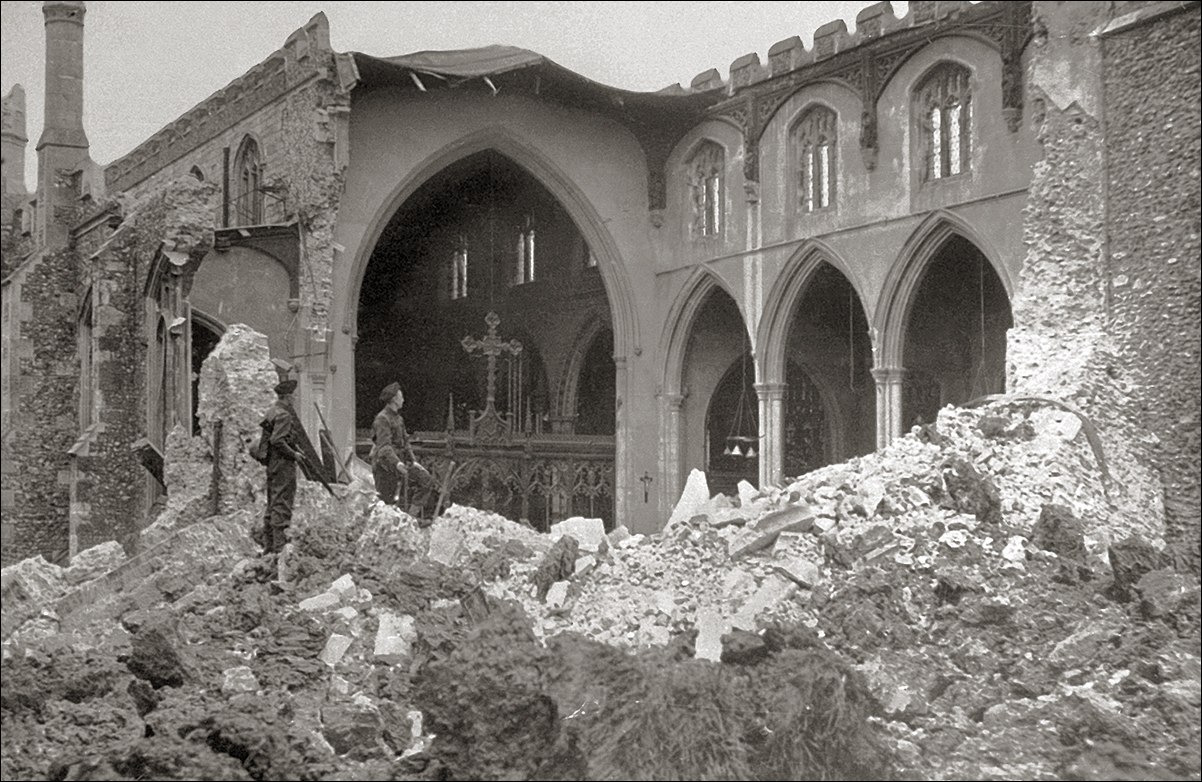 After the bomb fell, September 1940

On the night of September 16th 1940 a bomb was dropped in the churchyard which exploded near the tower. The north arcade collapsed and brought down the roof of the nave and later, part of the tower came down. The huge east window was untouched as was the rood screen surmounted by its cross. The two soldiers who had been on watch on the tower roof were knocked over by the blast but were otherwise unharmed.

The bells were undamaged but over the next few days the tower began to collapse and this left the bells  frame partly unsupported and in danger of  falling. A resouceful local policeman and his colleagues set to work and managed to lower the bells to the ground.

The top of the tower had to be demolished and the ruins were cleared and tidied up. The chancel and the two side chapels were relatively undamaged and it was decided that they would have to serve as the church until reconstruction could be undertaken.  To make a usable space, the arch between Chancel and Nave the two side arches were bricked up, the choir stalls removed to create more space  and some of the pews recovered from the Nave were repaired and installed to provide seating. The shattered windows were reglazed with clear glass and the organ was dismantled and removed. The whole process took 9 months and cost £1,300. The chapel of St Nicholas, the former gatehouse chapel of Coggeshall Abbey, was brought into use for a while as the parish church and some weddings were held there.

In the autumn of 1943 the war time ban on bell ringing was lifted (they were only to be used to signal the invasion) so a start was made on erecting a temporary building in the churchyard where the bells could by rung.  This work was promoted and organised by a local policeman and just a few days after the work was finished in May 1945, the bells were rung for the first time to celebrate VE Day.

Restoration of the church itself started in 1954 but the reparations for war damage provided by the Government were considerably less than the actual cost of restoration so a considerable fundraising effort was pursued. Piles were driven deep under the tower and north walls on which the foundations were laid and rebuilding finally got underway. In 1956 the repaired church was re-hallowed.

The rood screen survived the bombing but not the restoration. The decision to take it down and ‘open up’ the church caused considerable unrest among the congregation some of whom would never worship in the church again. The pews were replaced with chairs as the architect believed that the full height of the aisle pillars should be visible and the Victorian stencilled designs which adorned the walls were so damaged by cracking and the effects of the weather as to be impossible to restore and were whitewashed over. 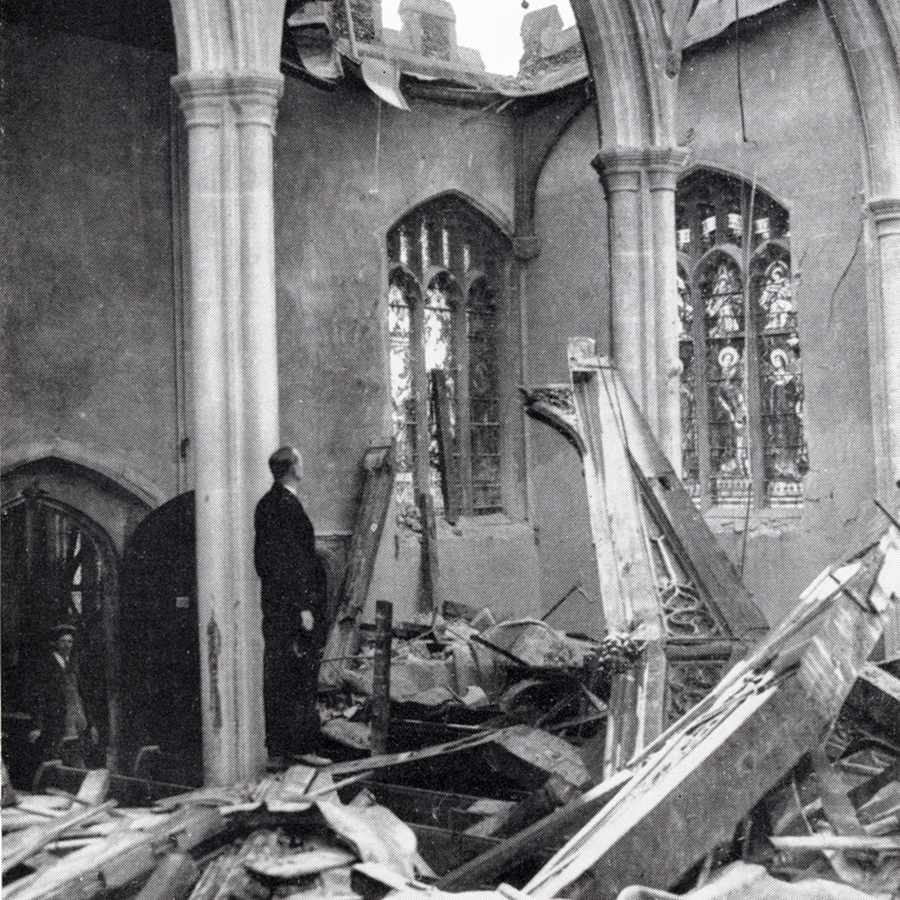 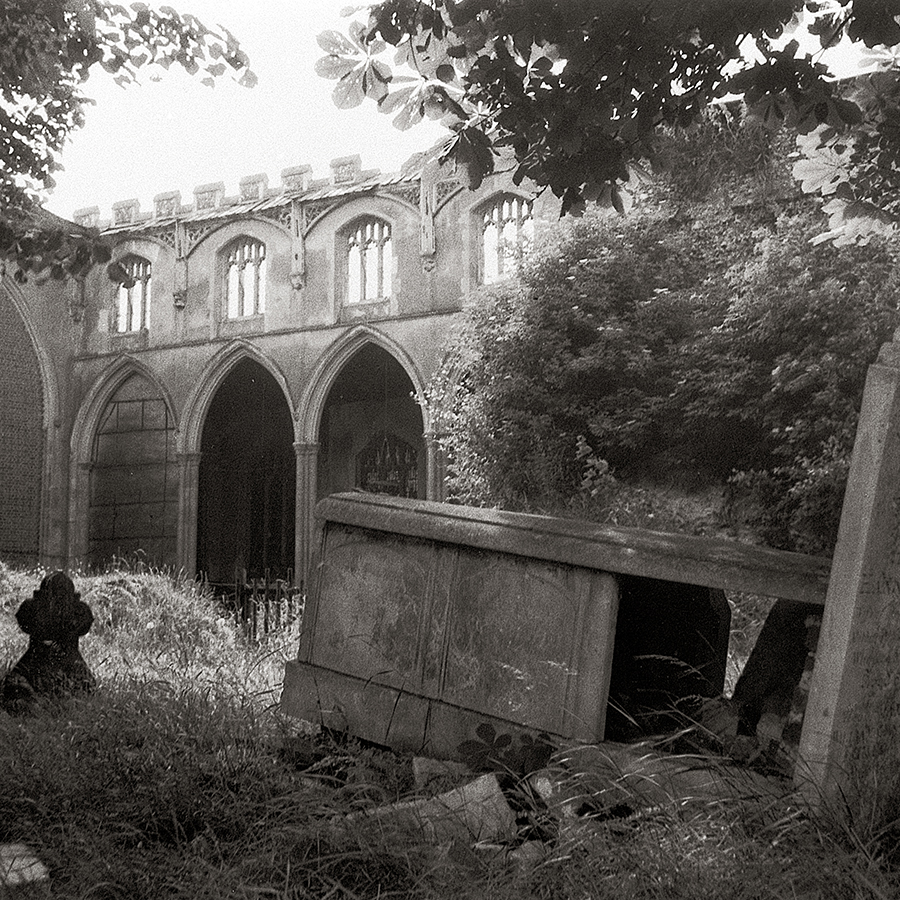 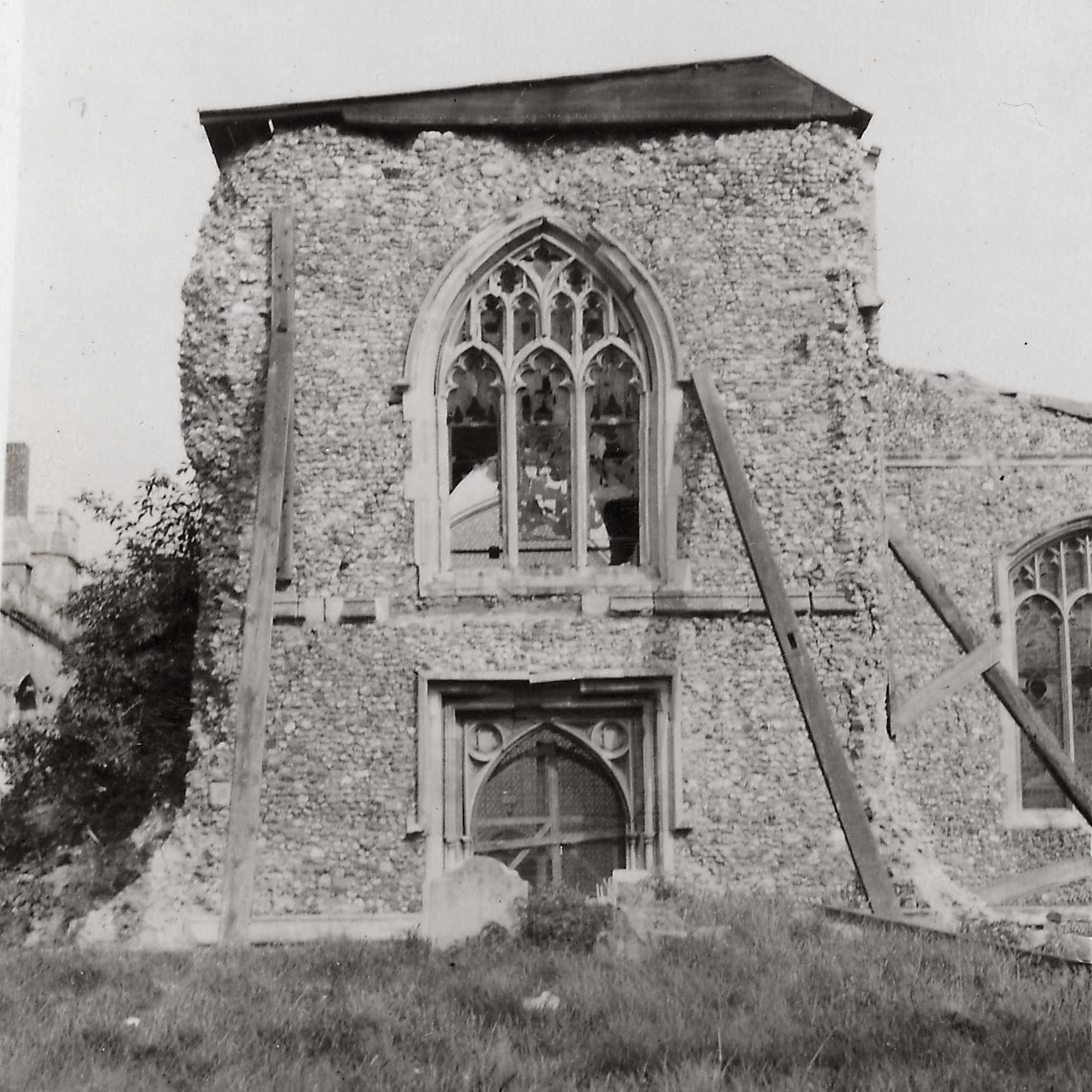 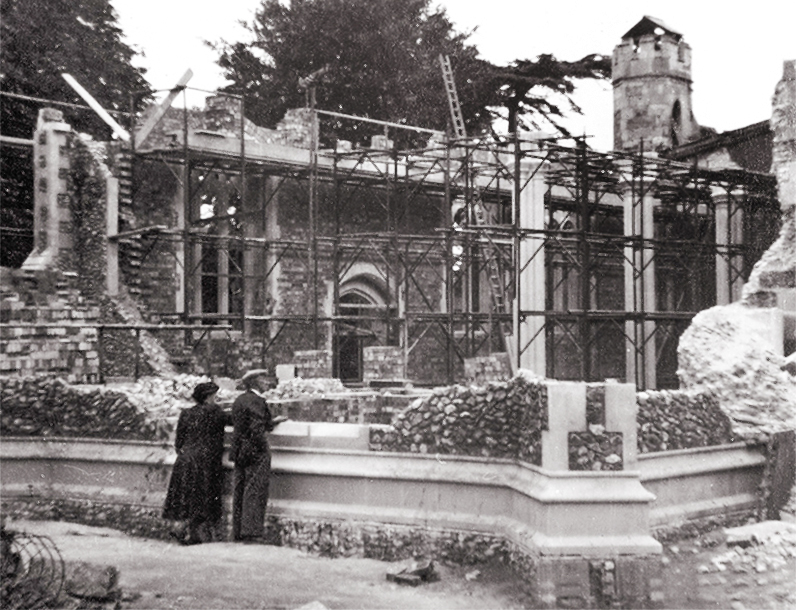 The church you see today has been rebuilt using as much of the original material as possible and now, over half a century on, it is difficult distinguish between the 15th and the 20th century work – a tribute to the skill and dedication of the craftsmen who restored St Peter’s to former glory.

The church has fine acoustics and is a venue for choral works and concerts. An extension on the north side of the church built in 2002 contains meeting rooms, a kitchen and all the usual facilities. A Flower Festival is held on each August Bank holiday which attracts thousands of visitors.

The millennium saw the addition of two new bells to the peal of eight and they are now considered to be one of the best in the country. The new bell wheels were made by Andrew Beckwith, grandson of Ernest Beckwith and the one for the tenor bell, which weighed over 1.25 tons, was over 7 feet in diameter. The task of taking down and re-hanging the bells was undertaken by the ringers themselves. On many weekends visiting teams of bell-ringers are in Coggeshall to ring St Peter’s ten bells and a bell-ringing school is held at the church to teach and encourage new ringers.

St Peter ad Vincula with Markshall Parish Magazines – there is an almost complete set in the museum which are available for reference.

‘The Rebuilding of the Church of St Peter ad Vincula, Coggeshall’ by the Rev Norman Brown MA undated but c1960. Copy in the museum

‘A History of Coggeshall’ by G F Beaumont, Edwin Potter, 1890

Back to the top